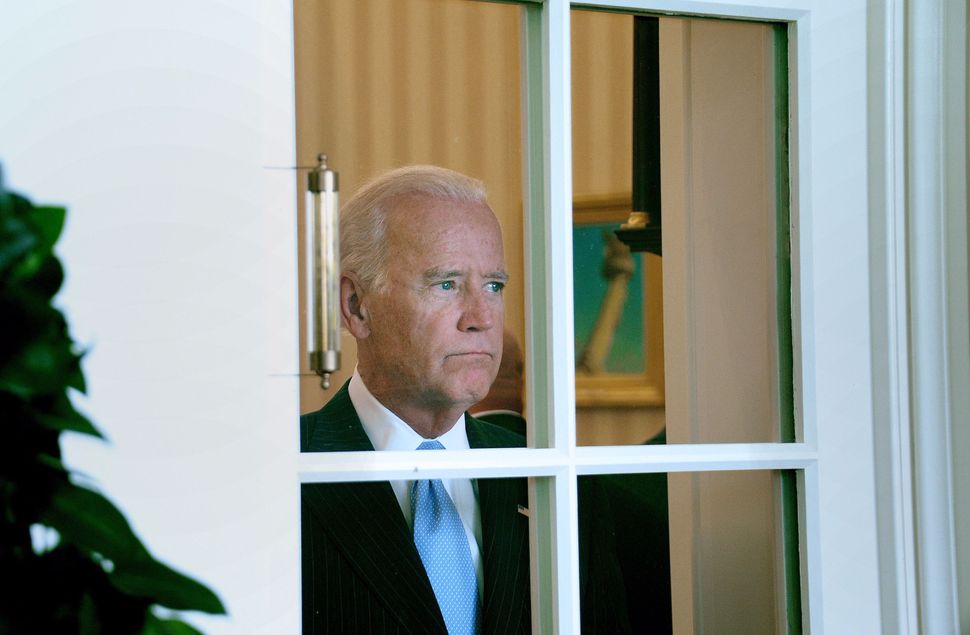 “Did Biden put pressure on the Ukrainians? Categorically yes,” the source said, according to Tablet’s report Tuesday. “That Biden told them to do it is 1,000% true.”

Another senior Israeli official told The Times of Israel that either U.S. President Barak Obama or Biden “spoke to Poroshenko about the matter.”

Both the U.S. and Ukraine have said Poroshenko and Biden spoke by phone on Dec. 19. But U.S. officials denied there was any discussion of the resolution. A spokesperson for Poroshenko would not confirm or deny that Biden lobbied the president on the issue, according to Tablet.

Biden’s national security adviser, Colin Kahl responded to criticism following the publication of the Tablet story with a tweet, saying: “All seems to be 1 unnamed Israeli source & the story is just wrong. The VP did not engage on the issue.”

@cerenomri @VladDavidzon @tabletmag All seems to be 1 unnamed Israeli source & the story is just wrong. The VP did not engage on the issue.

The Obama administration has denied any role in bringing the U.N. Security Council resolution to a vote. The U.S. abstained and did not use its veto to block the resolution Friday, allowing it to pass by a vote of 14-0. The resolution calls for a halt to all settlement construction, including in the Golan Heights and eastern Jerusalem, calling it a “flagrant violation under international law” that was “dangerously imperiling the viability” of a peace deal creating a Palestinian state.

“We did not draft this resolution. We did not introduce this resolution. We made this decision when it came up for a vote,” Ben Rhodes, Obama’s deputy national security advisor said Friday, adding, the U.S. “could not in good conscience veto” because of its opposition to settlement activity and concern for what it could mean for the region.

But Israeli Prime Minister Benjamin has accused the administration of being involved. “The Obama administration not only failed to defend Israel from this harassment at the UN, it cooperated with it behind the scenes,” he said Friday.

Netanyahu spokesman David Keys added Tuesday: “We have ironclad information that emanates from sources in the Arab world and that shows the Obama administration helped craft this resolution and pushed hard for its eventual passage.”

An Egyptian newspaper on Tuesday published what it said were transcripts of a meeting between U.S. Secretary of State John Kerry and chief Palestinian negotiator Saeb Erekat that show the Americans telling the Palestinians they would work with them on a resolution.

Since the vote Friday, Netanyahu and other Israeli officials have verbally assailed the U.S. and the countries that voted for the resolution. The prime minister has diplomatically censured most of those countries, including by disinviting Volodymyr Groysman, Ukraine’s first Jewish prime minister, for a two-day visit to meet with him and other top Israeli officials scheduled starting Tuesday.

Ukraine defended its vote on the resolution Monday as a defense of international law, saying it had “experienced itself the tragic consequences brought by” the violation of the law — an apparent reference to Russia’s annexation of Crimea and involvement in a civil war in the east of the country.