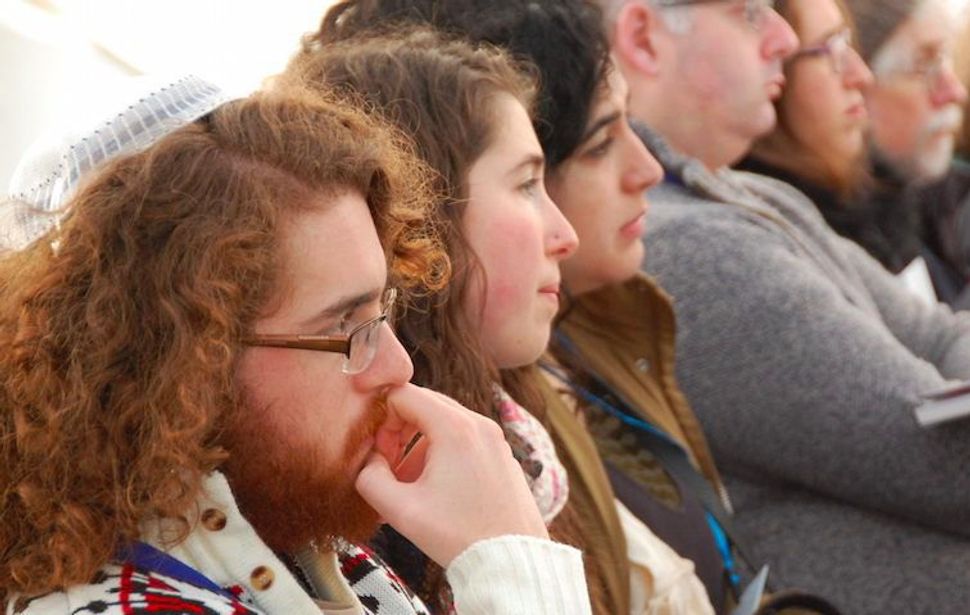 (JTA) — If you think the United States overdoes Christmas, you haven’t been to London in December.

The main drags are a riot of Christmas lights and gewgaws, the pubs overflow with midday revelers starting the week before and the Christmas shopping is no less intense at Selfridge’s and Primark than it is at WalMart and Macy’s.

And unlike the United States, the country — including public transportation and most attractions — shuts down on Christmas Eve, and even the day before that.

All of which leaves a Jewish resident or visitor with two choices: Happily indulge in all the frenzy of the Dickensian holiday, or get out of town.

The 3,000 or so Jews attending the Limmud Conference in Birmingham chose the latter.

The weeklong festival of Jewish learning features hundreds of classes taking place in a vast hotel space, and discussion, study sessions and performances going on into the night. I’ve described it as a sort of Jewish Brigadoon, an intense shtetl that pops up once a year in the British hinterlands (sorry, Birmingham) and is seemingly over as soon as it begins.

The U.K. version is the flagship of a largely volunteer-run network that stages conferences in 84 communities in 44 countries. I’ve met Limmud organizers here from Chile, Russia, China and at least three big U.S. cities — New York, Miami and Seattle. It’s a crazily heartening enterprise, allowing one to imagine that if thousands and thousands of Jews of all ages and backgrounds and ideologies all over the world can gather under one roof to celebrate with and learn from one another, things can’t be all that bad.

Of course, nothing is as good as it seems. Far fewer Orthodox Jews than liberal and progressive Jews attend Limmud, and hardly any rabbis representing Britain’s dominant Orthodox United Synagogue, let alone its growing haredi population, take part. It was big news a few years ago when the current chief rabbi, Ephraim Mirvis, agreed to attend, and this week he gave two well-received presentations. His predecessor, Jonathan Sacks, declined to take part when he was chief rabbi, and other Orthodox rabbis have complained that Limmud’s open door policy lets in heretical ideas.

The irony, of course, is that in a country in which Jews are less than 1 percent of the population, some build bridges, some put up walls and some have boundaries that they won’t cross over.

In the new era of Brexit and Trump, talk of walls and bridges was prevalent throughout the week. A full day of classes and events was devoted to the U.K. Jewish community’s role in relief for refugees, including Afghans, Syrians and Yazidis. I was a speaker at three sessions where worried audiences wanted to know more about Trump and his threats to disengage from global affairs and free trade. Liberal Jews here are as aghast over Brexit and their country’s retreat from Europe as their counterparts in the United States are over Trump.

Mirvis articulated the emerging new world order in a lecture titled “Inward or outward? Judaism in our divided world.” The chief rabbi insisted the new political fault lines are not left versus right or East versus West, but particular versus universal. Trump, Brexit and the emergent European nationalists represent a tendency to throw up walls when it comes to immigration, trade and culture. The debate, Mirvis said, is ultimately about whether societies are willing to embrace other cultures and allow them to permeate their own, thereby creating something new.

Jews, meanwhile, have always personified the struggle between the particular and the universal. The Jewish way, he said, is to “swim against the current” and maintain distinctions by “doing our own thing.” At the same time, tradition enjoins us to engage with the wider world, under the essential Torah teaching that “every single human being is created in the image of God.”

The impulse to reach out was celebrated on a field trip Wednesday to a mosque, church and Sikh temple in Birmingham’s famously multicultural Lozells and Handworth neighborhoods. The Board of Deputies, British Jewry’s representative body, arranged the trip for about 15 Limmudniks. A local interfaith council trains members of faith communities as tour guides and ambassadors.

At the vast Guru Nanak Nishkam Sewak Jatha, or Sikh temple complex, on Soho Road, a volunteer, Ajit Singh, explained the basics of a faith born in India only 547 years ago and invited us to hear their scripture being chanted in the Gurudwara, or main sanctuary. In the New Testament Church of God, as sleek and modern as a corporate auditorium, Annette Robinson spoke of the Jamaican immigrants who brought their West Indian Pentacostalism to the damp and chilly Midlands. And at the imposing Lozells Central Mosque, a guide named Hussein spoke of the immigrants who made Birmingham a center for Pakistani and Muslim life in England. The region has some 1,000 mosques, he claimed; by contrast, Birmingham has 2,000 Jews and three main synagogues.

Each of the houses of worship was a haven of calm in what looked like a gritty part of town; each of the guides spoke of the inevitable racism and distrust they have encountered as immigrant communities and religious and racial minorities. Each insisted that religion was the answer, not the cause, of what ails this “divided world.”

When asked, inevitably, whether moderate Muslims have done enough to denounce the jihadists, Hussein quietly deflected the question.

“That’s why people like us are so committed to building bridges,” he said.

In his talk Monday, Mirvis also spoke of bridges, saying voters in Europe and the United States are being given the choice between”drawbridge up and drawbridge down.” He suggested that political leaders learn from the Jewish imperative to cultivate one’s own culture and distinctiveness while learning to look outward.

But he also took aim at his own community, and any Jewish community, that includes exclusionists who are only pious in the ways they deal with each other.

“If your hesed (lovingkindness) only extends to those within your inner circle,” Mirvis said, paraphrasing the founder of the Gerer Hasidic movement, “or God forbid you are racist, that is a treif [unkosher] way of life.”