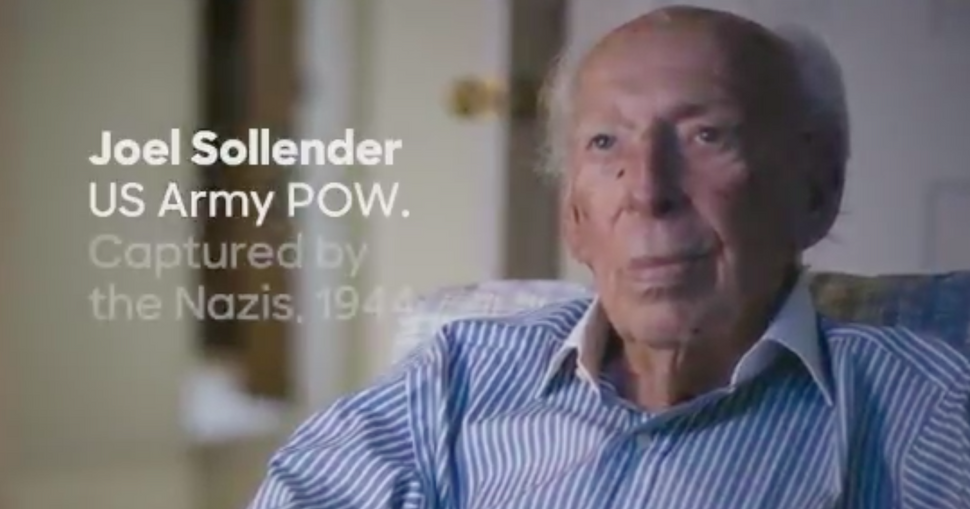 Image by Hillary Clinton for President

The cause of his death on Tuesday evening was congestive heart failure, the San Diego Union-Tribune reported Thursday. Sollender, who was Jewish, was 92.

“He had a great patriotic feeling about this country and the war affected him in many profound ways,” his widow, Dorothy, told the Union-Tribune in a phone interview from the couple’s home in Poway, California. “Here was this smart-ass Jewish intellectual from New York City who became friends in the Army with a Missouri farmer, an Indian bootlegger. He just got along with everyone because he was a person for every man and he truly loved America.”

Sollender told the Union-Tribune in November that he was irked by presidential candidate Donald Trump’s remarks during a Republican primary event last year in Ames, Iowa, mocking John McCain, a U.S. senator from Arizona and a POW during the Vietnam War. Trump said the former Navy pilot wasn’t “a war hero because he was captured.”

Reports of Sollender’s anger reached Clinton election headquarters in Brooklyn, and a camera team taped him soon afterword for two ads. A 30-second spot showed Sollender and other veterans reacting strongly to a string of Trump comments about the military. An 80-second ad featured Sollender alone, crying in his home as he reflected on his POW experience that was “70 years ago, and yesterday.”

Both ads debuted on Sept. 16 — National Prisoners of War Remembrance Day — and played in heavy rotation in Ohio, Pennsylvania and other battleground states.

“He was devastated that Trump won and worried about the future of the country,” Dorothy Sollender said.

Born in Manhattan, Sollender quit his studies at City College of New York following  World War II and was recruited into the 346th Regiment of the Army’s 87th Infantry Division.

He was captured on Dec. 11, 1944, in France and imprisoned in Stalag 3A near Luckenwalde, Germany, according to military records kept by the National Archives.

His decorations included a Bronze Star for valor, the Combat Infantryman Badge and a Purple Heart with Oak Leaf Cluster.

After the war, Sollender finished his studies at New York University, majoring in business administration. He became an executive in the textile industry before retiring in 1992. The Sollenders had two children, one of whom died in a car accident in 2002.

Besides his wife, Sollender is survived by a son, Dr. Jonathan Lee Sollender, and six grandchildren, two of whom serve in the military.