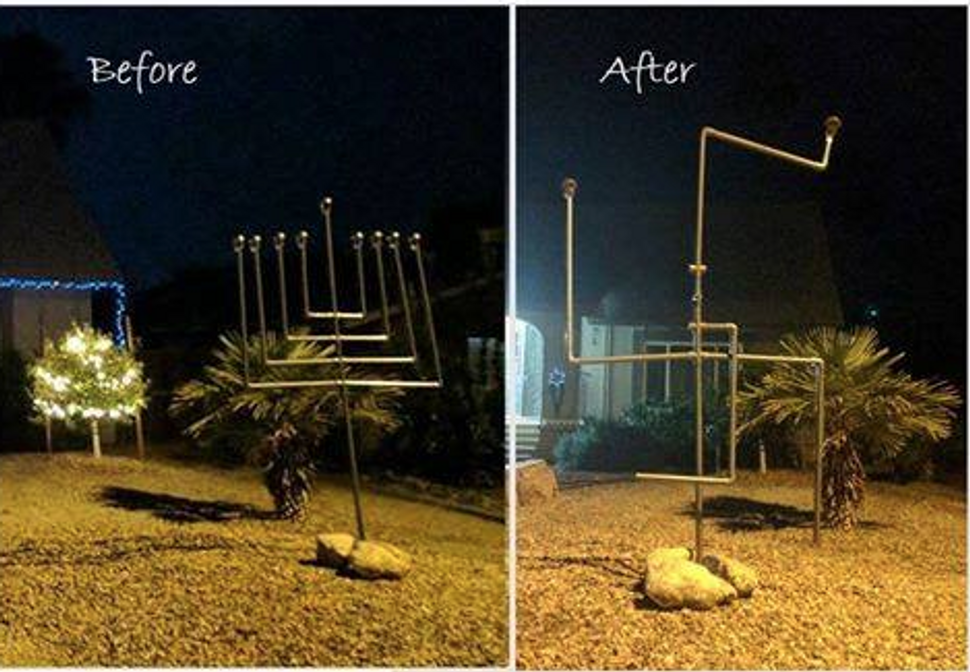 (JTA) — A large menorah in the front yard of an Arizona family was twisted into the shape of a swastika.

The Hanukkah candelabra was made of gold spray-painted PVC pipes and solar-powered lights.

Mom in Arizona had to tell her kids: “People hate us for no reason.”https://t.co/fIeD7I0bzj pic.twitter.com/HGP7yfy06N

Parents Naomi and Seth Ellis told the Washington Post they built the 7-foot menorah in front of their house after their three sons, ages 5, 6 and 9, asked for lights in their yard like their neighbors’ Christmas decorations.

As the Forward reported on Friday, family discovered Friday morning that the menorah had been tampered with. Police helped Naomi and Seth Ellis dismantle the swastika before their sons saw it, according to the newspaper. The menorah was rebuilt and replaced.

“We talk a lot about the importance of equality and tolerance, loving everybody no matter what,” Naomi Ellis told the Washington Post. “I had to tell them that not everybody feels that way. Some people are ignorant, and this is what they do.”

The Chandler Police Department told local news stations that the vandalism will be investigated as a hate crime. Additional police patrols were set up in the area in response to the incident.

On Friday evening, members of the family’s synagogue and their rabbi gathered in the Ellis front yard to light their rebuilt menorah, according to reports.