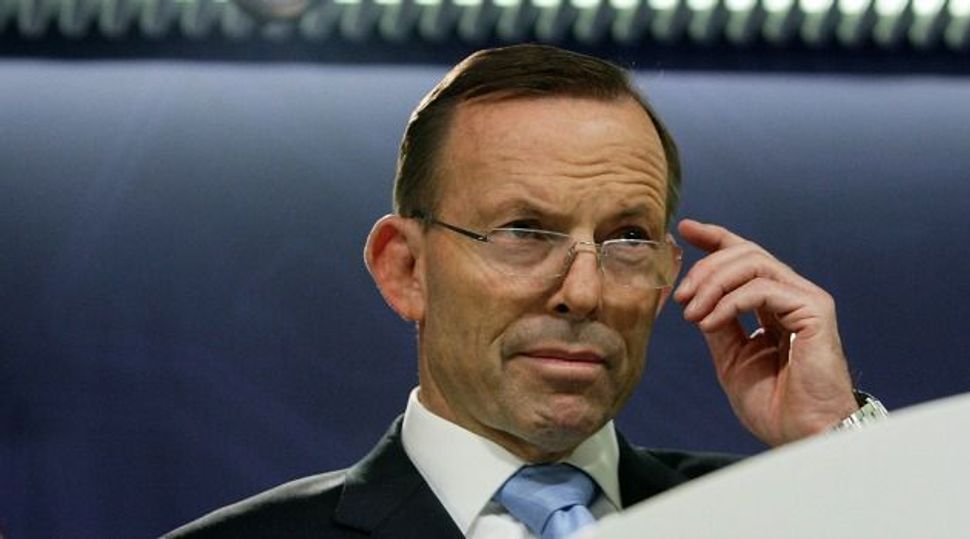 SYDNEY (JTA) — Former Australian Prime Minister Tony Abbott has called on his country to cut its $40 million aid to the Palestinian Authority and to move its embassy from Tel Aviv to Jerusalem if U.S. President-elect Donald Trump moves his country’s embassy.

Abbott wrote in the weekly edition of The Spectator magazine: “In discussions with the Australian MPs, Palestinian Authority Prime Minister Rami Hamdallah claimed that his people accepted Israel’s right to exist behind secure borders; but this is hard to credit given Palestinian TV’s consistent glorification of suicide bombers, reference to Jews as the ‘sons of monkeys and pigs’ and claims that the state of Israel is a ‘satanic project’.”

Abbott continued: “Of course, there should be a permanent settlement for a Palestinian state where Jews have the same rights as Palestinians have in Israel. The alternative is a kind of apartheid that’s at odds with Israel’s own values…. And Australia should cut our $40 million a year in aid to the Palestinian Authority while it keeps paying pensions to terrorists and their families. Another way for Australia to demonstrate its unswerving support for Israel, as the Middle East’s only liberal, pluralist democracy, might be to join any move by the Trump administration to move its embassy to Jerusalem.”

Fairfax Media reported that there was “an impassioned rebuke from the head of the Palestinian delegation in Australia, Izzat Abdulhadi, who called Abbott’s suggestions “unfounded, unhelpful” and warned of “severe” consequences for Australia in the form of sanctions and condemnation from Muslim countries.”

The news source also reported that Bishop said Australia “does not have any plans to move the Australian embassy from Tel Aviv to Jerusalem” – a move that would echo the plans of Trump, whose incoming administration sees the relocation of their embassy as a “very big priority.”