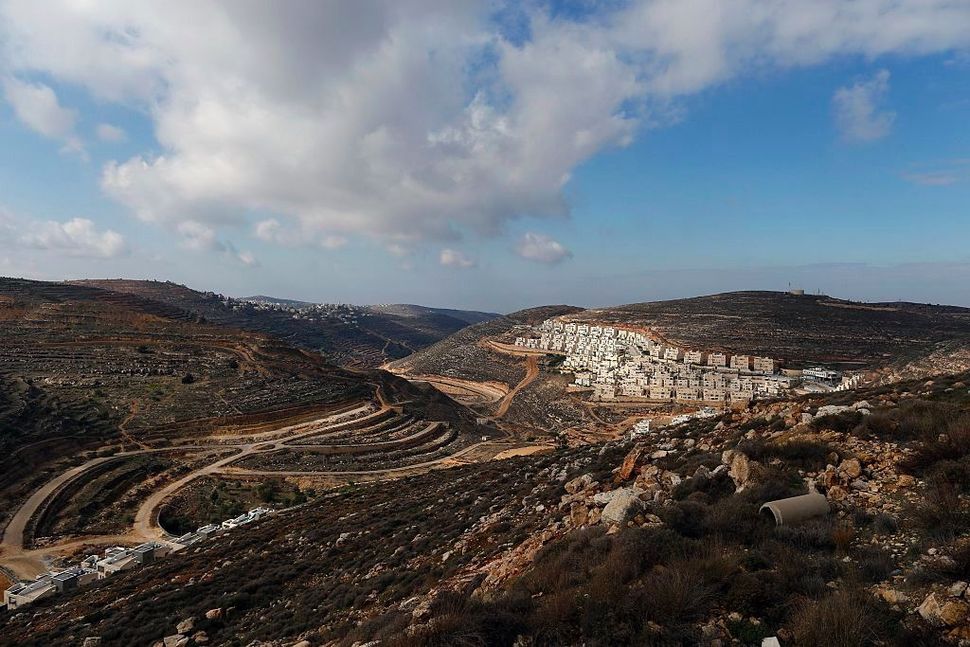 (JTA) — Israel’s leading security think tank has published a plan to redraw the map of the West Bank in a bid to consolidate major settlements and prevent the spread of others.

The plan, presented Monday to Israeli President Reuven Rivlin as part of the Institute for National Security Studies’ yearly strategic survey, calls for the government to allow construction in West Bank settlement blocs and Jerusalem. At the same time, it recommends a halt to construction in the 90 percent of the territory outside the major settlements.

In laying out the plan, researchers Assaf Orion and Udi Dekel argue that negotiations with the Palestinians are unlikely to lead to a final-status agreement. With relations deadlocked, they warn, Israel is drifting toward a single binational state with the Palestinians, which threatens its democratic and possibly Jewish identity.

It is an analysis that echoes one put forth in a speech last month by U.S. Secretary of State John Kerry, although unlike Kerry’s plan it would proceed without direct negotiations between Israel and the Palestinians intended to reach a final-status agreement and without resolving what Kerry called “all the outstanding issues.”

To preserve Israel’s options, including the possibility of a Palestinian state, the researchers say, the government should implement their plan in coordination with the incoming administration of U.S. President-elect Donald Trump, which has already signaled that it will not pressure Israel on the settlements or negotiations.

Amos Yadlin, the director of the institute and a former head of Israel’s military intelligence, told JTA that he endorsed the plan, saying Israel had a “window of opportunity” with Trump.

“Israel should take this chance of a new administration with a new approach to promote the bottom-up independent shaping of its borders, even if the Palestinians are still holding their extreme position,” he said.

The main changes under the institute’s plan would be to Area C, the 60 percent of the West Bank under full Israeli control per the 1993 Oslo Accords. Besides carving out 17 percent of the area for the settlement blocs, where 86 percent of settlers live, Orion and Dekel suggest using up to 42 percent for development on behalf of the Palestinians and up to 33 percent for protection of “vital” security sites, including the Jordan Valley.

The rest of Area C would keep its current status, and settlers would be encouraged to relocate to the settlement blocs.

The Palestinian Authority would administer the major Palestinian population centers in Areas A and B, which comprise 40 percent of the West Bank and are home to 99.7 percent of Palestinians, as it already largely does. But the Israeli military would retain the right to act as needed.

The status of Jerusalem, which Israel governs as its capital but the Palestinians also claim as theirs, would not change. Most of the world considers all Israeli building in the West Bank and eastern Jerusalem illegal, but Israel disputes this.

Orion and Dekel recommend that Israel and the world promote security and development in the West Bank. This could bolster the Palestinian Authority’s declining legitimacy on the West Bank street and help prepare the society for eventual final-status negotiations, they say. An alternative, they say, would be for Israel to take “independent steps” to politically separate from the Palestinians.

The Hamas-governed Gaza Strip would be handled separately, ideally with a combination of military deterrence, border security and development.

The plan has elements that could appeal to the right and the left, said its architects.

Despite a rightward shift in recent decades, Yadlin said, the Israeli public was “ready to consider” the institute’s plan because the political left had given up the “illusion” that there was a Palestinian partner for peace and the right no longer supported the status quo. He cited Education Minister Naftali Bennett’s proposal that Israel annex Area C as an example of new thinking on the right, but said the Palestinians would need part of that territory to create a viable political entity.

Israelis “basically want to see a two-state solution, with a Jewish, democratic secure country, but not according to the Palestinian parameters,” Yadlin said.

Ideally, he said, the Palestinians would cooperate with the institute’s plan and eventually return to negotiations for a two-state solution. The government should leave open that possibility anyway to fend off international condemnation like the United Nations Security Council’s anti-settlement resolution that the U.S. allowed to pass last month, he said. But if the Palestinians would not budge, Yadlin said, Israel could unilaterally draw its borders to exclude most of them.

“I’m not among those who are terrified by the demographic threat [of Jews being outnumbered by Palestinians in a single state]. I think this is the biggest mistake of Kerry,” Yadlin said, referring to the Kerry speech last week in which he warned that without relinquishing control of the Palestinians, “Israel can either be Jewish or democratic – it cannot be both.”

Shlomo Brom, the head of Israeli-Palestinian research at the Institute for National Security Studies, told JTA that he saw no chance the current Israeli government would accept the plan backed by Yadlin. Every right-wing government since 2000 has avoided drawing a line around the settlements, he said, and “none were as right wing as the one we have now.”

Nor would the Palestinians be likely to cooperate if the plan were carried out, Brom said, since they would see their potential future state shrink with no real gains. He added that it would be problematic from the point of view of international law for Israel to change the terms of the Oslo Accords without Palestinian consent.

The best hope to shake up the status quo and save the two-state solution, Brom said, was the rise of a viable centrist alternative to Netanyahu’s government and increased international pressure on Israel.

The simplest option for a government that wanted a two-state solution would be to make the security barrier Israel’s provisional border — allowing settlement building to the west and prohibiting building to the east of it, Brom said. Israel could then begin taking steps toward a Palestinian state, unilaterally and in coordination with the Palestinians, hopefully culminating in a final-status agreement, he said. Brom recommended trading the Oslo principle of “Nothing is agreed until everything agreed” for “What is agreed and can be implemented will be carried out.”

Like Yadlin, Brom said he did not think the end of the two-state solution would spell demographic disaster for Israel. But he said terrorism would probably force the state into indefinite militarily rule over a stateless Palestinian population, which the world would view as a form of apartheid.

Unfortunately, Brom said, this was the most likely outcome.