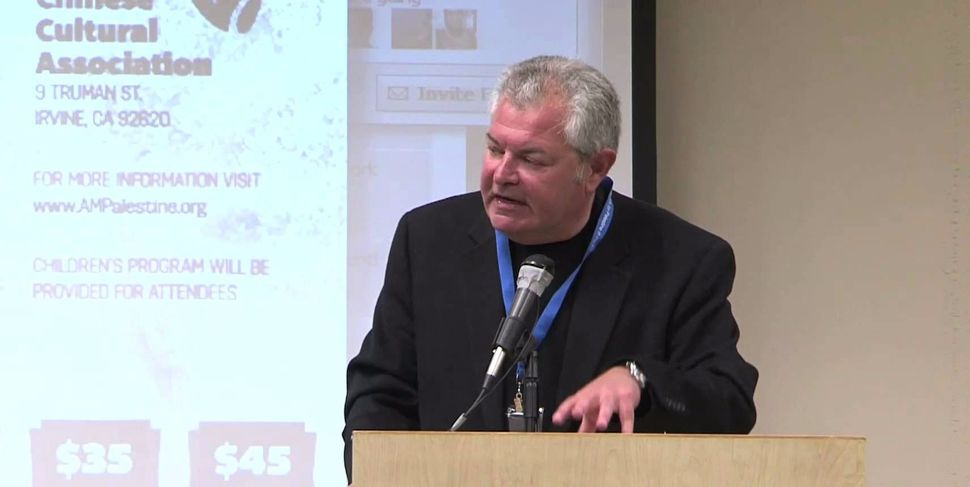 UCLA students vowed to resume their protests Wednesday against Gabriel Piterberg, an Israel-educated historian, over charges by two of his female students of repeated sexual harassment.

Piterberg, a graduate of Tel Aviv University who served in the Israeli army, until now was more widely known as a fierce critic of Israel and its founders.

When Piterberg appeared at his Monday morning class — for the first time since settling a sexual harassment case with the university — he was greeted by chants of “Hey, hey, ho, ho, Piterberg has got to go,” according to the Daily Bruin student newspaper and members of Bruins Against Sexual Harassment.

A photograph taken in his classroom shows a message on the blackboard reading, “If a tenured professor sexually assaults his own students it’s abuse of power.”

Some 20 minutes after the start of the class a student stood up and left, after which Piterberg dismissed the other students and also canceled his scheduled afternoon class. Protesters said they would return and continue their disruptions during Piterberg’s scheduled Wednesday classes.

In 2013, two female graduate students accused Piterberg, 61, of harassing them over many years by making sexual comments, pressing himself against their bodies and forcing his tongue into their mouths, the Los Angeles Times reported.

Piterberg, who has declined all requests for interviews, has formally denied the charges, but in a 2014 settlement with the UCLA administration he accepted a $3,000 fine, a suspension without pay for one quarter and agreed to attend a training course against sexual harassment.

He was also removed from his position as director of the Gustav von Grunebaum Center for Near Eastern Studies at UCLA and was forbidden to meet individually with certain students except during office hours, and then only if the door remained open.

The settlement did not prevent Piterberg’s return to his teaching post, triggering widespread complaints that the university had been too lenient in the case. A group of 38 history professors sent a letter to UCLA Chancellor Gene Block that stated, in part, “Students, staff and faculty must contend with the presence of an admitted harasser in our midst,” and noted that Piterberg had expressed no remorse for his actions or for the damage he had inflicted on the history department.

According to his resume, Piterberg served in the Israeli army in the early 1980s, and saw action against PLO forces in Southern Lebanon.

He was born in Buenos Aires, Argentina, but grew up in Israel. After his army discharge, Piterberg studied and received academic degrees – all with highest honors – from Tel Aviv University in Middle East history and political science, and a doctorate from Oxford University, where his research focused on the history of the Ottoman Empire.

Subsequently, he taught at England’s University of Durham and at the Ben Gurion University of the Negev. In 1999, he joined the UCLA history faculty, advanced to full professor in 2008 and was named director of the UCLA Near East Studies Center in 2013.

At seminars and in specialized scholarly publications, Piterberg early on earned a reputation as an unrelenting critic of the creation and existence of Israel. He has described himself as “not only a non-Zionist, but in certain ways also anti-Zionist.”

One of his most vocal critics at UCLA has been Judea Pearl, a professor of computer science and director of its Cognitive Systems Laboratory. He and his wife, Ruth, are also co-founders of the Daniel Pearl Foundation, created in memory of their son, The Wall Street Journal reporter murdered by Islamist extremists in Pakistan in 2002.

“Piterberg belongs to a group of extreme left so-called historians who see their role as the reinterpretation of history to fit their political agenda,” Pearl said.

Pearl said that Piterberg has greatly damaged UCLA and its history department by trying to legitimatize anti-Israel movements on campus and “demoralizing Jewish students.”