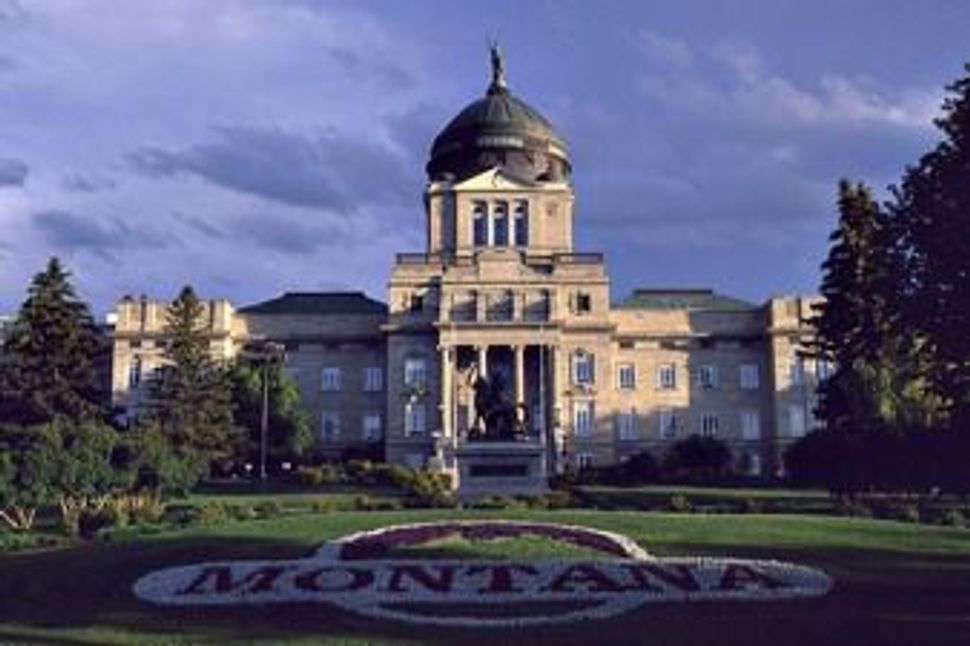 (JTA) — A delegation of Orthodox rabbis from North America thanked Montana officials for their support of the Jewish community during a meeting in the state’s capitol.

The rabbis presented Montana Gov. Steve Bullock with a copy of the Five Books of Moses, called a Chumash, and thanked him for defending the state’s Jewish residents. They did the same for Republican State House Speaker Austin Knudsen, Democratic State Rep. Dave Fern, and Republican State Sen. Keith Regier.

The meeting Wednesday in Helena comes in the wake of the postponement of a neo-Nazi armed march designed to harass the Montana Jewish community of Whitefish that had been scheduled for Martin Luther King Jr. Day. Montana lawmakers and faith leaders have issued statements in support of the Whitefish Jewish community.

Andrew Anglin, who runs the neo-Nazi Daily Stormer website, announced last week that he would not hold the march as scheduled, because he had not yet obtained a special event permit from the city of Whitefish. He said on his website that he is now planning to hold the march in February, when it “will be bigger and have more guns and special guests than we originally planned.”

Anglin had said that nationalist groups from the United Kingdom, Sweden, France and Greece would attend the march. He also confirmed that “a representative of Hamas will be in attendance, and will give a speech about the international threat of the Jews.”

He also said his attorney believes he has a federal lawsuit against the city because it required him to get permission for the march from every business on the route, something the lawyer says violates the marchers’ Constitutional rights.

The Daily Stormer published a blog post last month calling for followers to “take action” against Jews in Whitefish by writing and calling them with anti-Semitic messages. The post claimed that Jewish residents were “threatening” the local business run by the mother of Richard Spencer, president of the National Policy Institute, a white supremacist think tank.

The rabbis said they planned to send copies of Five Books of Moses to the approximately 1,500 Jewish families living in Montana, and that they were raising money to send four non-Jewish high school students from Whitefish to the Auschwitz-Birkenau Memorial and Museum in Poland, the site of the notorious Nazi death camp, and that the students would then travel throughout the state to talk to other students about the Holocaust, according to the Associated Press.

The rabbis hailed from Washington, D.C.; Montreal; Sacramento, California; and San Antonio, Texas. They were hosted by Orthodox rabbis from Bozeman and Missoula in Montana.

Following their meetings in the capitol, the rabbis were scheduled to travel to meet the non-Orthodox rabbis serving the beleaguered town of Whitefish.