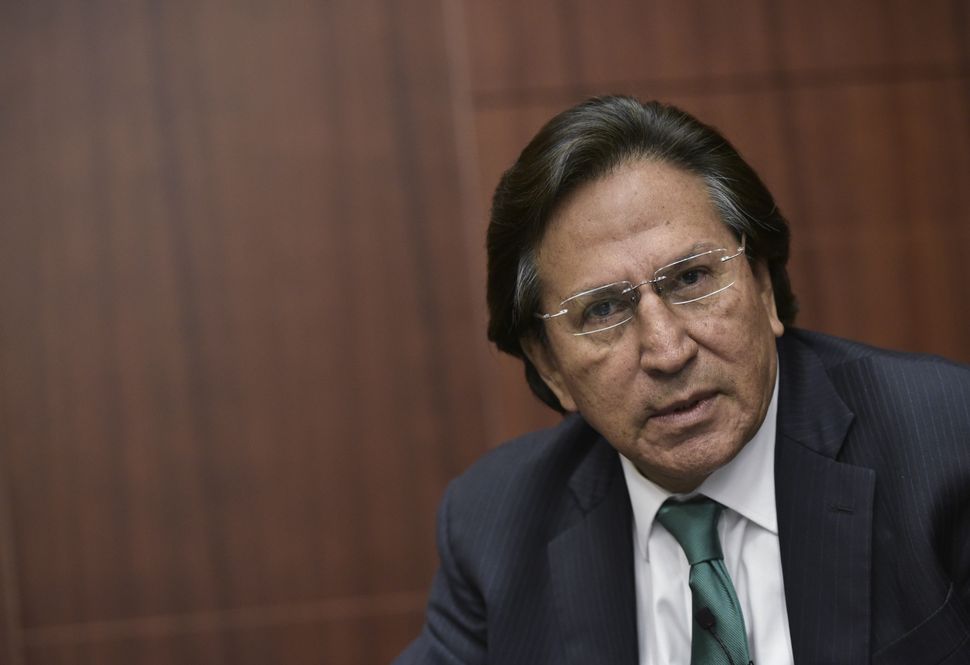 RIO DE JANEIRO (JTA) — Israel says Peru’s fugitive former president, Alejandro Toledo, who is wanted on corruption charges, would not be allowed to enter the country.

Toledo’s arrest was requested in Peru last week over allegations he took $20 million in bribes. He was said to have chosen to flee to the Jewish state because his wife, Eliane Karp, holds Israeli citizenship, and because Israel does not have an extradition agreement with Peru, reported Peruvian newspaper El Comercio on Sunday.

“Toledo will be allowed in Israel only when his affairs in Peru are settled,” Israel’s foreign ministry spokesman Emmanuel Nahshon said in a statement that was hailed by the Peruvian government.

The ex-leader was believed to be in San Francisco and possibly on a flight set to land in Israel under an assumed name. The flight landed late Sunday in Tel Aviv without him, though. Officials in Peru have offered a reward for information leading to his capture.

Toledo is a visiting professor at Stanford University, located near San Francisco, where he graduated with a PhD in economics.

Toledo, 70, originally said the $20 million were a loan from his French-Belgian wife’s mother that came from compensation she received as a Jewish Holocaust survivor. But his former vice president, David Waisman — himself a prominent member of Peru’s Jewish community — said that was untrue.

“Lies just flow out of him,” Waisman said, adding a stern message for his former boss: “If it turns out you’re guilty and you go to jail, then rot in there.”

Kuczynski, elected president of Peru last year, was born in Lima to a French Protestant mother and a German Jewish father who fled the Nazis in 1933.