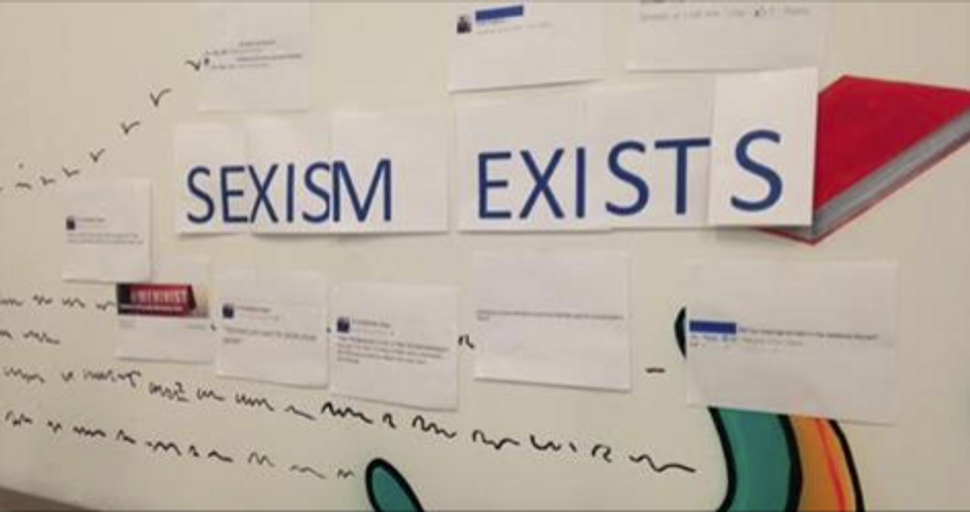 The billboard before it was torn down. Image by Facebook

The newly formed Yeshiva University Feminism Club’s first bulletin board display was ripped down about an hour after it was put up.

“It didn’t take very long. We’re disappointed, but unfortunately, not surprised,” the club wrote on Facebook on February 16.

The display in consisted of quotes taken from the Facebook page “A YU Bochur Says,” a page that posts “real things said by real male YU students,” such as “racism, misogyny, homophobia, anti-Modern Orthodoxy.”

“Women just want to seize more power,” was one such quote, and “Why’s the girls’ beis midrash [study hall] so nice? It’s the girls’; they don’t even use it.”

When the Feminism Club was started about a week ago, “A YU Bochur Says” posted a screenshot of a comment on the page, “Will the meetings be held in the cafeteria kitchen?”

“The goal of the club is to raise awareness and for that awareness to spark action,” Molly Meisels, president of the club, told the Forward. “People don’t realize that there is sexism in our community,” she told the YU Commentator, “so we wanted to show that there clearly is.”