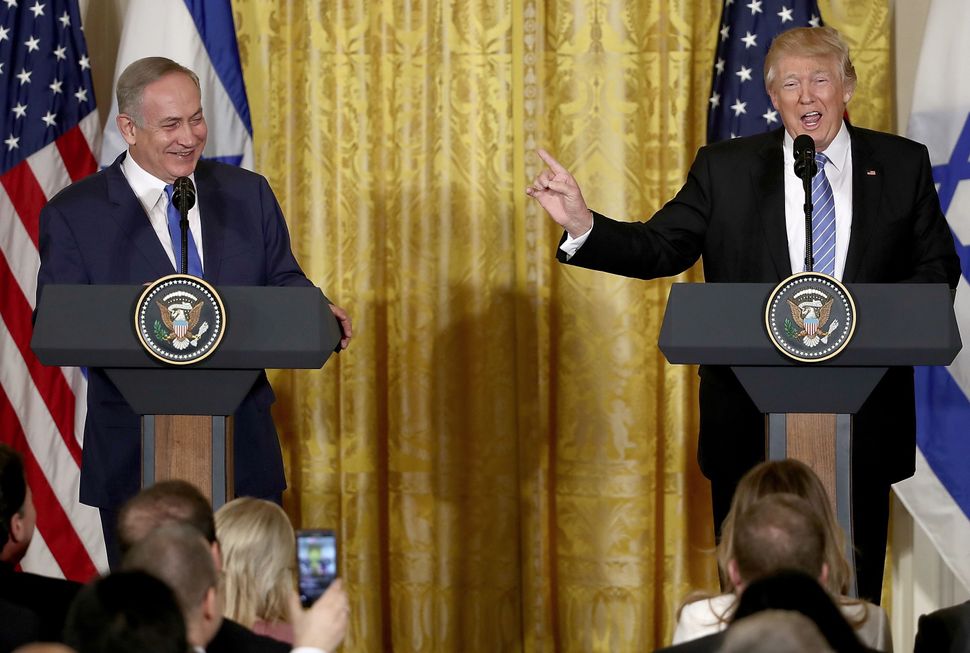 Trump and Netanyahu on Wednesday. Image by Getty Images

WASHINGTON (JTA) — President Donald Trump and Prime Minister Benjamin Netanyahu said there would be “no daylight” between the United States and Israel and planned to set up a number of working groups in areas of bilateral security and economic interests.

Like their joint news conference prior to the leaders meeting on Wednesday, the joint statement released later that evening by both governments was short on specifics but long on friendly agreement.

“In today’s meeting, President Trump and Prime Minister Netanyahu agreed that there will be no daylight between the United States and Israel,” the statement said. “The President underscored the United States’ unwavering commitment to Israel’s security, and that his Administration will safeguard and strengthen the overall security relationship.”

The phrase “no daylight” was an allusion to the policy of Trump’s predecessor, President Barack Obama, who did not shy away from making public his disagreements with Israel.

According to the statement, the leaders discussed Iran, Syria and the threat posed by the Islamic State terrorist group. They also talked about settlement construction; Trump has asked Israel to stop expansion for now while he tries to reignite Israeli-Palestinian peace talks.

The president brought up the slowdown on settlements at the news conference, where he and Netanyahu both derided the agreement Obama reached with Iran to roll back its nuclear program in exchange for sanctions relief as a “terrible deal.”

The statement also said the leaders have directed their staffs to form joint working groups in the areas of “cyber, intelligence, security, trade, technology, countering the threats posed by Iran and other actors, and promoting Arab-Israeli cooperation, including economic cooperation.”

“A working group will also focus on enabling the growth of the Palestinian economy,” it said.