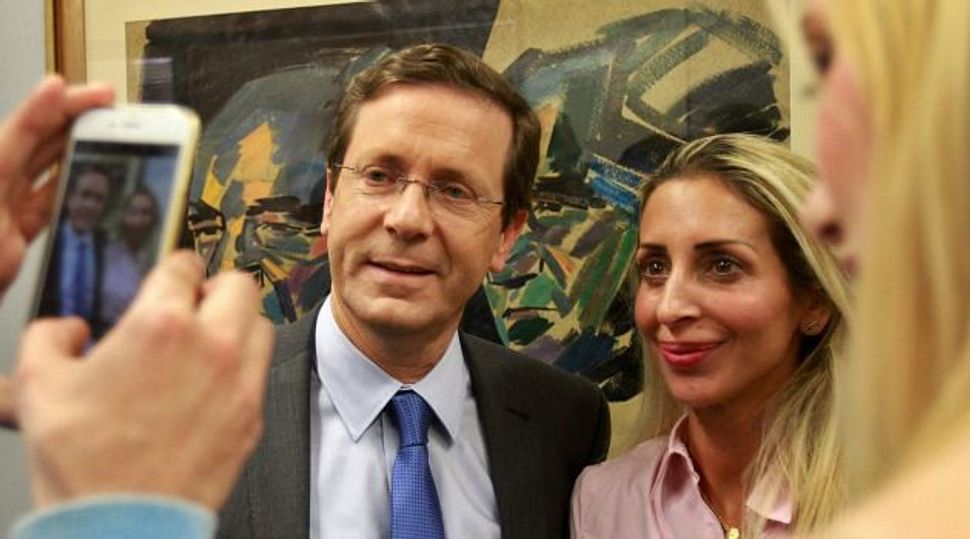 Brink of Victory? Zionist Union leader Isaac Herzog casts ballot with his wife. Polls show him leading Benjamin Netanyahu in the complicated race to be Israel’s next premier. Image by getty images

JERUSALEM (JTA) — Israeli opposition leader Isaac Herzog said he entered into negotiations to join a unity government a year ago on the basis of a secret regional peace initiative bring negotiated at the time.

Herzog, head of the Zionist Union, told American Jewish leaders on Monday that he demanded a total freeze on settlement construction as his condition for entering a national unity government with Prime Minister Benjamin Netanyahu, and that Netanyahu was willing to appoint him foreign minister and in charge of the peace process. Herzog added that in that position he would have “work(ed) proactively to get international consent of sorts for construction within the settlement blocs.”

Herzog said the unity government agreement failed due to disagreement from members of Netanyahu’s right-wing coalition, who were not willing to distinguish between settlement blocs and far-flung settlements in the West Bank.

Herzog spoke on Monday to a meeting in Jerusalem of the Conference of Presidents of Major American Jewish Organization, a day after the Israeli daily Haaretz first published a report revealing that, one year ago, then-U.S. Secretary of State John Kerry presented a plan for a regional peace initiative to Netanyahu at a secret meeting in Aqaba that included Jordan’s King Abdullah II and Egyptian President Abdel Fattah al-Sissi.

The deal would have included recognition of Israel as a Jewish state and a renewal of talks with the Palestinians with the support of the Arab countries.

The Aqaba summit was the basis for the unity talks which began two weeks later, according to Haaretz, and confirmed by Herzog on Monday.

Kerry initiated the conference, Haaretz reported, citing former senior officials in the Obama administration who asked to remain anonymous. The Prime Minister’s Office did not comment to Haaretz on its report.

Palestinian Authority President Mahmoud Abbas knew about the summit, but did not attend according to Haaretz.

Following his talks with Herzog about a unity government, Netanyahu instead invited the right-wing Yisrael Beiteinu party to join his coalition government and named party head Avigdor Liberman as defense minister. Netanyahu retains the title of foreign minister.

At a news conference prior to his meeting last week in Washington DC with U.S. President Donald Trump, Netanyahu called for a regional peace initiative.