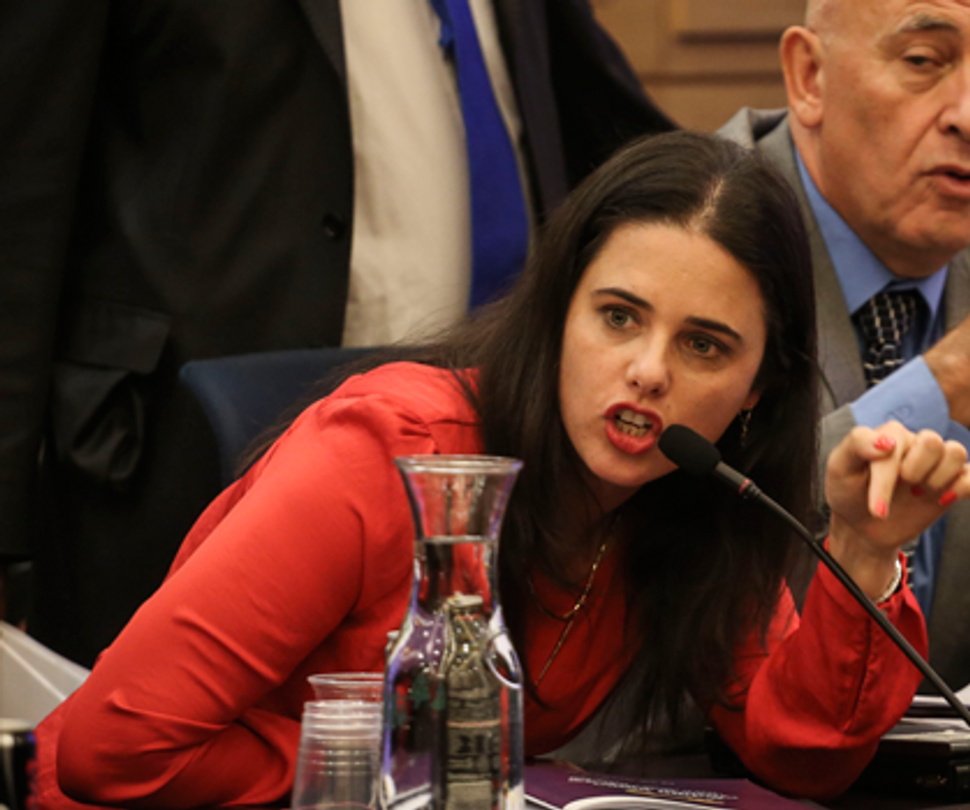 Outspoken: Ayelet Shaked speaks during a meeting of Israel’s Knesset, where she has been a member since 2013. Image by Flash90

Three conservative new members have been named to Israel’s Supreme Court as part of what the ultranationalist justice minister said on Thursday was her push for a bench more representative of far right-wing Israelis.

The 15-member court, widely seen as a liberal bastion, has drawn criticism from the minister, Ayelet Shaked, and other politicians on the right over rulings supporting Palestinian property rights in the occupied West Bank and its occasional reversal of Israeli laws it deemed illegal.

Shaked, a leader of the ultranationalist Jewish Home party, has long said she wanted more conservative judges on the court, where replacements for four justices retiring this year were announced late on Wednesday.

Three of the four new appointees – including a Jewish settler in the occupied West Bank – were on Shaked’s list of preferred candidates considered by a nine-member selection committee on which she serves along with three Supreme Court justices and representatives of the Bar Association.

Shaked had threatened to change a law that would have weakened the justices’ influence in the committee unless it agreed to name more conservative justices.

“A Conservative revolution,” Israel’s best-selling Yedioth Ahronoth newspaper said in a front-page headline about the appointments. But some commentators said it was too early to gauge whether the new justices would promote any dramatic change of tone in the court.

The new justices will include David Mintz, who is a West Bank settler, Yael Vilner, an Orthodox Jewish woman, and Yosef Elron. In the radio interview, Shaked described them as conservatives, and media reports noted that in recent years Mintz had ruled in favor of the government in turning down at least two freedom of information requests by reporters.

The fourth appointee is George Kara, an Arab judge who Israeli media reports termed a compromise candidate backed by the Bar Association.

“My nominees were chosen,” Shaked told Army Radio. “My mission was to ensure all Israelis – and certainly the conservative stream – are represented (on the court).”

Yedidya Stern, a law professor and vice president of the Israel Democracy Institute, a research center whose declared mission is to strengthen the foundations of Israeli democracy, called the four appointees “good and efficient judges.”

But he said the big question was “whether the Supreme Court, with these people, will continue to be a bulwark” against anti-democratic elements in Israeli society.

“In the absence of a written constitution (in Israel), conservatism can be manifested in a weakening in the defense of human rights and minorities,” Stern said on Army Radio.