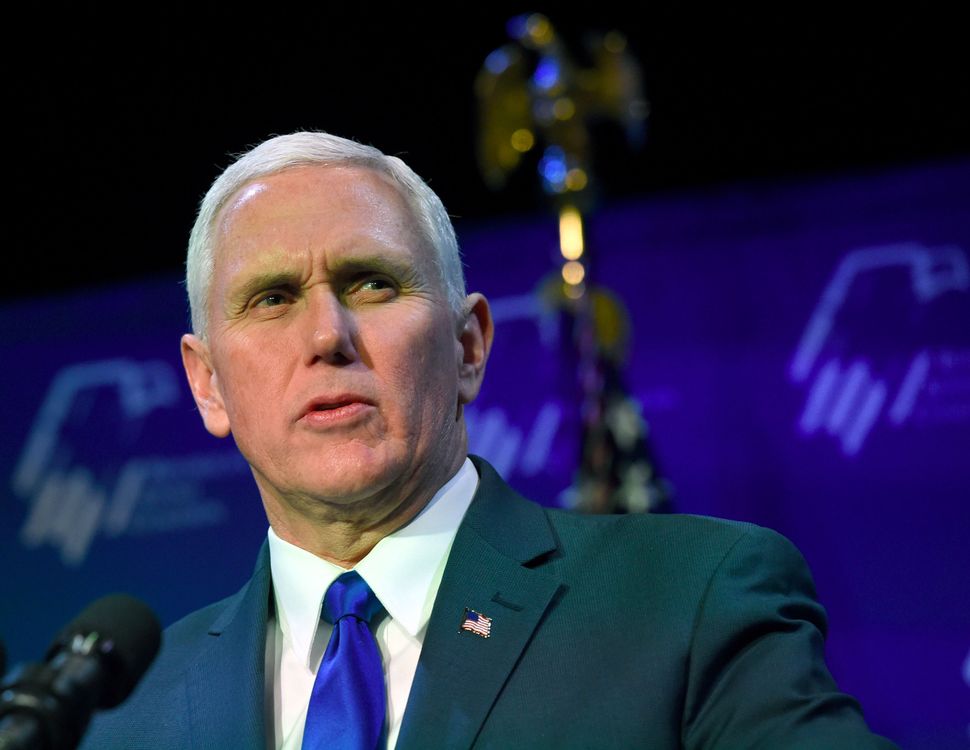 LAS VEGAS (JTA) – Republican Jews have President Donald Trump to thank for their party’s renewed dominance of Washington politics. So what do they think of him?

Marlyn Appelbaum paused to contemplate the question at the opening of the Republican Jewish Coalition’s confab at the Venetian resort hotel in Las Vegas Friday evening. Then, she avoided mentioning the president.

“My biggest thing is pro-Israel,” said Appelbaum, the head of a teacher training institute in Sugar Land, Texas. “I was real upset at the last eight years. I think things for Israel are going to turn around.”

Her answer captured the vibe at the RJC’s annual two-day Leadership Meeting. Amid giddy celebration of the end of the Obama years and the advent of a new Republican administration, RJC officials and members seemed to make an effort to get excited about Trump, with whom their group has a fraught history.

By contrast, Vice President Mike Pence, one of the pro-Israel community’s closest friends, was greeted effusively at the event, where he addressed the crowd.

“For the first time in RJC history we have a sitting Republican [vice president] sitting with us for our Shabbat dinner!” RJC director Epstein announced ahead of Pence’s speech. The crowd erupted in applause.

“And a Republican president who is going to make our country great again!” Epstein added. Only a couple tables in the corner clapped.

Still, “Make America Great Again” kippahs dotted the Venetian’s byways, and Elliot Lauer, a board member perhaps best known as Jonathan Pollard’s lawyer, delivered a dvar Torah Friday evening in which he likened Trump’s victory to the triumph of the Jews in ancient Persia celebrated on Purim.

“He did say things that were offensive,” said Robert Lewit, a retired psychiatrist from Florida who in the Republican primaries supported Marco Rubio, his state’s U.S. senator. But “he’s innately a brilliant politician, making immigration an issue, advocating for a U.S. economic revival.

Though unimpressed by Trump’s star turn on “The Apprentice” reality show, Lewit’s wife, Jane, said, “No one saw what he saw: the forgotten man,” — a reference to Trump’s appeal to working and middle class Americans. “In any case, it’s better than what was. I happen to have had a total antipathy for our last president, and everything he stood for.”

It has been a rocky road for the RJC and Trump. At the group’s presidential candidates’ forum in December 2015, Trump mocked the wealthy Jewish donors by saying he too was rich and so immune to their purchasing power. He also said he would be “neutral” on brokering Israeli-Palestinian peace and refused to recognize Jerusalem as Israel’s capital.

Then there were Trump’s affronts to minorities, like Muslims and Hispanics, which did not sit well with a Republican constituency that has in recent years spearheaded calls for the party to be more inclusive. And when Trump appeared last spring hesitant to disavow his burgeoning support from the “alt-right,” a loose grouping of anti-establishment conservatives that includes within its ranks unabashed anti-Semites, the RJC went dark.

The group hardly issued statements mentioning Trump. None of its events at the Republican National Convention in July were open to the press — in contrast with the group’s high profile in past years. Its get-out-the-vote drive largely barely mentioned Trump and focused on vulnerable GOP senators in states with large Jewish communities. And even its inauguration party last month was closed to the media.

Now, the RJC is trying hard to get behind the president. Trump’s pivot from his “neutrality” on Israel in 2015 to an eager embrace earlier this month of Israeli Prime Minister Benjamin Netanyahu – and his policies on the Palestinians and Iran — have helped the RJC belatedly come around.

“There was not a consensus [on the RJC board],” said Elliott Broidy, a venture capitalist who was among about a dozen of the 50 or so board members who backed Trump prior to his nomination. “Even when he was our presumptive nominee. Over time, people became more supportive. Now that he’s president, there’s deeper support on the board.”

Fred Zeidman, another board member who is close to George W. Bush and could never quite bring himself to endorse Trump during presidential campaign, said it was incumbent on all Republicans to make sure government works now that the GOP is in control of all its levers.

“I have a vested interest in making this White House a success,” said the Houston-area businessman.

Asked by journalists Friday about Trump’s most recent Jewish controversies — including the White House’s omission of reference to the Jews in a statement on International Holocaust Remembrance Day, which was widely criticized by Jewish groups, including the RJC — the group’s director Matt Brooks talked about Israel.

“There’s a professional complaining class in the Jewish community that will criticize and attack Donald Trump no matter what he says,” Brooks said. “People who genuinely have an open mind, individuals and organizations, see he is following through on commitments he made on campaign, he is repositioning in a positive way the U.S.-Israel relationship.”

Brooks also pointed to the vice president. “He’s a terrific partner to President Trump, you have a terrific team with the both of them.”

In his speech, Pence too vouched for Trump’s pro-Israel bone fides. “If the world knows nothing else, it will know this: America stands with Israel,” he said.

“We told the ayatollahs of Iran they should check the calendar, there’s a new president in the Oval Office. President Trump will never allow Iran to develop a nuclear weapon, this is my solemn promise to you.”

He also described his recent visit to the Dachau concentration camp in Germany, where a Holocaust survivor gave him a tour. The crowd was clearly moved.

In one ballroom of the Venetian, Rep. Devin Nunes, R-Calif., the chairman of the House Intelligence Committee who has defended the Trump White House from allegations it is covering up Russian interference in the elections, pleaded with RJC members to have the president’s back, according to people who were present. Boris Epshteyn, a top White House aide who is emblematic of an emerging vocal minority among Republican Jews who have adopted the alt-right’s confrontational style, made a similar pitch in another ballroom.

Sheldon Adelson, the casino magnate who owns the Venetian and who contributed tens of millions to the effort to elect Trump, had a private meeting with Pence prior to his speech. At Trump’s inauguration, Adelson and his wife, Miriam, were accorded a rare honor to political donors, appearing on the capitol’s dais for the swearing-in.

Despite his access, Adelson’s hoped-for administration officials have been waylaid: Former U.S. House of Representatives Speaker Newt Gingrich, former ambassador to the United Nations John Bolton, former New York Mayor Rudy Giuliani and Elliott Abrams, a mandarin in the Reagan and the George W. Bush administrations, are all on the outside looking in.

Seen as responsible for freezing them out is Chief White House Strategist Steve Bannon, a hero of the alt-right and the bane of neoconservatism, an interventionist outlook that many Republican Jews still support.

But RJC members were able to hold up their Jewish representatives in government, however few. Rep. David Kustoff, the freshman from Tennessee, joked, in an easy drawl, that “Jewish Republicans in the House grew by 100 percent,” with him joining Rep. Lee Zeldin, R-N.Y.

Eric Greitens, the steel-jawed Missouri governor, described how he rallied a diverse community this week to help clean up a vandalized St. Louis area Jewish graveyard, an effort joined at the last minute, by none other than the vice president. Pence called out inspiration over a bullhorn. Pence stood on the back of a pick-up truck. Pence wielded a rake.

Greitens, having depicted a sweaty, intense Pence, getting down and dirty for the Jews, finally got around to Trump.

“The president had called me earlier that day,” Greitens said. “He said, ‘Tell the people of Missouri that we stand with them in the fight against anti-Semitism.’”