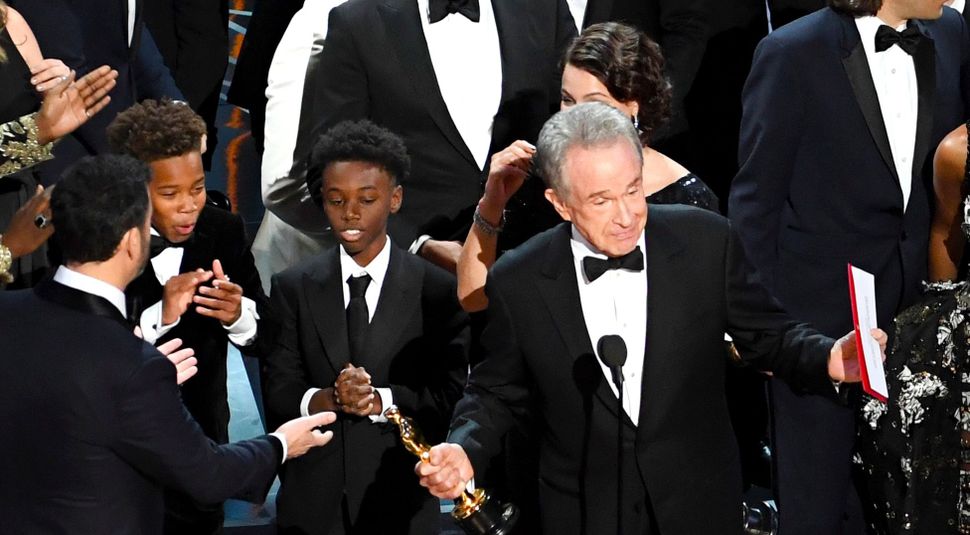 (JTA) — “Moonlight” was named Best Picture at the 2017 Academy Awards two minutes as the cast of the film “La La Land” arrived on stage after being announced for the award.

“LA La Land” producer Jordan Horowitz realized the mistake after being approached onstage by Academy security at the end of the Sunday night broadcast from the Dolby Theater in Los Angeles.

“There’s a mistake,” Horowitz said into the microphone onstage. “This is not a joke, ‘Moonlight’ has won best picture.”  He then flashed for the cameras the card from which the winner was to be announced by presenters Warren Beatty and Faye Dunaway.

“I’m going to be really proud to hand this to my friends from ‘Moonlight,’” Horowitz said, raising the golden Oscar statuette that he had been handed.

The cast of “La La Land” still took home six Oscars, after being nominated for 14, tying the record set by “All About Eve” and “Titanic.”

Emma Stone won Best Actress for her performance in “La La Land,” beating Jewish actresses Natalie Portman and Isabelle Huppert, and Casey Affleck won Best Actor for his role in “Manchester By the Sea”; in the category of Best Supporting Actress, Viola Davis won for her role in “Fences,” and Mahershala Ali won for his performance in “Moonlight.”

During his acceptance speech, Ali thanked his teacher Zelda Fichandler, a Jewish stage producer, director and educator who was chair of the graduate acting program and Master Teacher of Acting and Directing at the Tisch School of the Arts at New York University.

Damien Chazelle, who won for Best Director, grew up in a Catholic household in Princeton, New Jersey, but attended Hebrew school for four years after his parents became dissatisfied with his religious education at a church Sunday school.

Composter Justin Hurwitz, Chazelle’s Jewish roommate at Harvard University, won for Best Original Score and for Best Original song for “City of Stars,” from “La La Land.” Benj Pasek, who is Jewish, and Justin Paul wrote the song’s lyrics. During the acceptance speeches Pasek thanked his mother, who he said “let me quit the JCC soccer league to be in a school musical.”

Kenneth Lonergan, whose mother and stepfather are Jewish, took home an Oscar for Best Original Screenplay for “Manchester By the Sea.” He had also been nominated for best director.

Ezra Edelman, who with Caroline Waterlow won in the category Best Documentary Feature for “O.J.: Made in America” is the son of Marian Wright Edelman and Peter Edelman, among the founders of the New Israel Fund. Ezra Edelman also serves on the board of Americans for Peace Now.

“Fantastic Beasts and Where to Find Them,” based on the 2001 book by Harry Potter series author J.K. Rowling, which features two Jewish characters, took an Oscar in the Best Costume Design category.

Among the actors who died since the last Academy Awards ceremony were Jewish thespians Gene Wilder, Anton Yelchin, and Carrie Fisher.