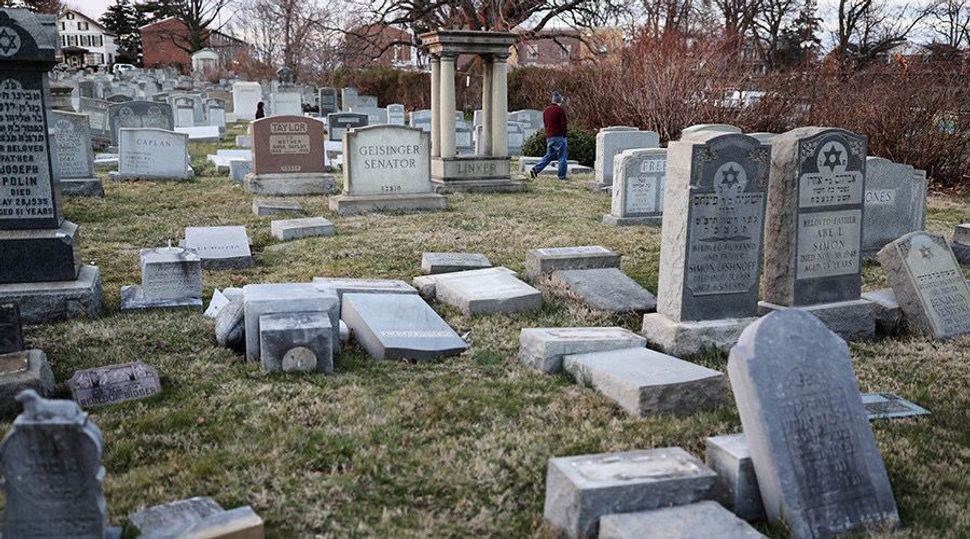 (JTA) — Hundreds of protesters attended a demonstration against hate crimes in Philadelphia following the recent vandalism at a Jewish cemetery and hate crimes around the country.

The Jewish Federation of Greater Philadelphia, organized the rally, held Thursday under the banner “Stand Against Hate,”  following the toppling of over 100 headstones that were recently discovered damaged at Philadelphia’s Mount Carmel Cemetery. Additionally, five headstones were found toppled Thursday morning at the Waad Hakolel Cemetery, also known as the Stone Road Cemetery, in Rochester, New York, the third such incident in the United States in less than two weeks.

Also last month, more than 100 headstones were damaged in vandalism at a St. Louis-area Jewish cemetery. Separately, last month saw two more stings of bomb threats called into Jewish community centers, schools and institutions across the country, representing the fourth and fifth waves of such harassment this year.

Tom Wolf, the Democratic governor of the stane of Pennsylvania, said the cemetery vandalism was “the desecration of the values we all hold dear” and called the bomb scares “threats against each and every one of us and our common humanity,” AP reported.

Naomi Adler, CEO of the Jewish Federation of Greater Philadelphia, said she was “incredibly heartened by the outpouring of so many generations of people who are taking their time to come out in the cold to stand against hate.”

No suspects have been arrested for the vandalism or bomb threats. New York Governor Andrew Cuomo on Thursday ordered state police to launch a full investigation after a Jewish cemetery in Rochester was vandalized.

The Anti-Defamation League on Thursday offered a $5,000 reward for information leading to the arrest and conviction of those responsible for the Rochester desecration.

“Although it remains unclear if the attack was motivated by anti-Semitism,” the ADL wrote in a statement, “We are deeply disturbed by the vandalism.”

On Thursday, the New York Police Department reported that anti-Semitic incidents during the first three months of 2017 were up 94 percent in New York City over the corresponding period last year.

The figure is part of a 55% increase overall in the number of hate crimes in the city as compared to the same time last year.

Through the first two months of this year, 35 anti-Semitic incidents have been reported, compared to 18 through February 2016.

Overall, the total number of hate crime incidents in the city for the first two months of 2017 is 68, up from 44 last year, according to the NYPD. Among the incidents, six people were targeted for being black, three for being Muslim and eight for their sexual orientation.