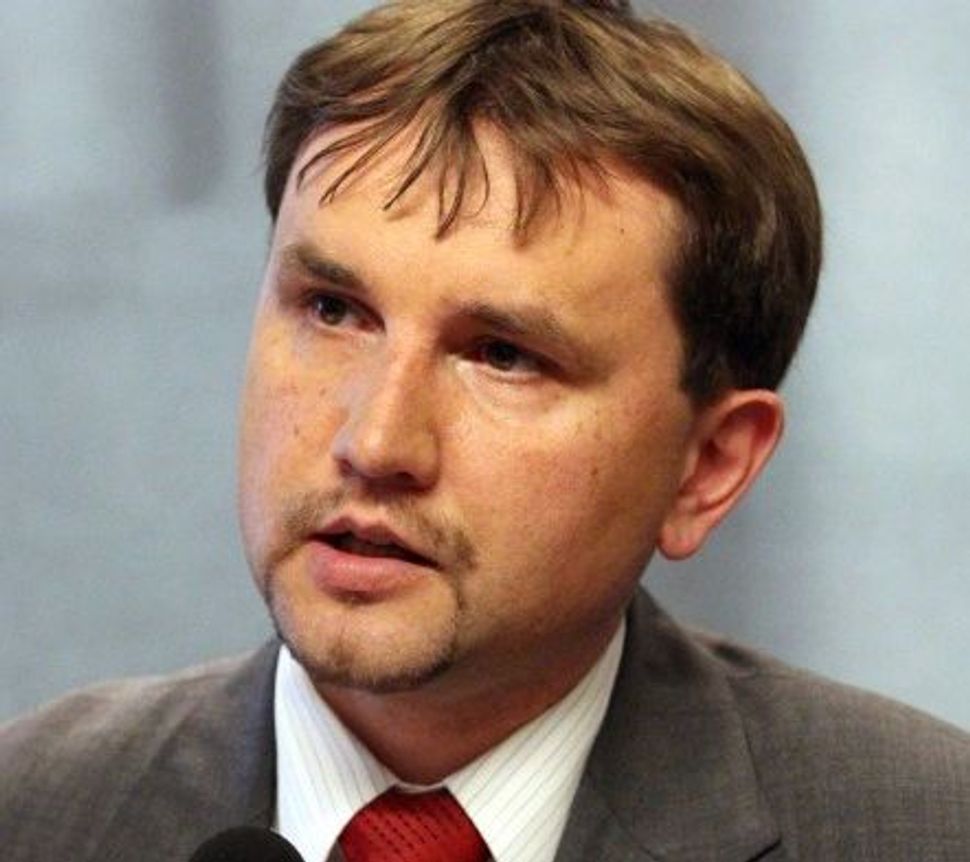 (JTA) — Ukrainian Jews protested the attendance at an international symposium on the Holocaust by a state historian who praised a Nazi collaborator whose troops killed Jews.

Eduard Dolinsky, director of the Ukrainian Jewish Committee, last week condemned the planned attendance of Volodymyr Vyatrovych, director of Ukrainian National Memory Institute, at a conference planned for Paris this week under the title: “Holocaust in Ukraine – New Perspectives on the Evils of the 20th Century.”

Vyatrovych, who has been running his state-controlled institution since 2014, “is a falsifier and manipulator of historical facts who has not only blamed Jews for the Great Famine, but denies the anti-Semitic ideology and practices” of the Organization of Ukrainian Nationalists and the Ukrainian Insurgent Army, Dolinsky said in a statement.

Known as OUN and UPA respectively, the two groups fought during the first half of the 20th century against Soviet domination and briefly collaborated with Nazi occupation forces before turning against them. Encouraged by the anti-Semitic vituperations of many of their leaders, UPA troops killed thousands of Jews during the 1940s, according to the Simon Wiesenthal Center.

In an interview published in January in the magazine Novoy Vremya, Vyatrovych named Roman Shukhevych, a former leader of the UPA, as one of five “eminent personalities who have changed the course of history,” along with Winston Churchill, Johannes Gutenberg, Vaclav Havel and Elon Musk. According to some historians, Shukhevych’s wife rescued a Jewish woman during the Holocaust.

According to the Yale University history professor Timothy Snyder, UPA militiamen under Shukhevych were responsible for murdering thousands of ethnic Poles and Jews.

Today, Shukhevych and other Holocaust-era nationalists are revered in Ukraine as heroes for their opposition to the Soviets. This sentiment became more pronounced following the overthrow in 2014 of former President Viktor Yanukovych in a revolution lead by nationalists who opposed his corruption and perceived subservience to Russia.

The veneration of Nazi collaborators and attempts to equate Nazism with communism have proliferated in Eastern Bloc countries in recent years. In some of these countries, attempt to promote such equivalence serves also to obfuscate popular support and even enthusiasm for the murder of Jews during the Holocaust, according to Efraim Zuroff, the Israel and Eastern Europe director of the Simon Wiesenthal Center.

Last week, the government of Croatia, a country which used to have a collaborationist government under the Nazis, set up a body responsible for issuing “recommendations for the legal regulation of the use … of the insignia and symbols of non-democratic regimes,” language that elsewhere in the region was used in legislation that banned both Nazi and communist symbols.

In Slovakia, a state-run scientific and cultural institution last month pulled from the internet a 5-minute video it produced arguing that the country’s Jews would have been murdered even without the formation of the Slovak protectorate state of the Nazi collaborator Jozef Tiso. The video, entitled “Without March 14” – a reference to the date in which that state was established in 1939 — prompted vocal objections by anti-fascist groups and several Jewish organizations.