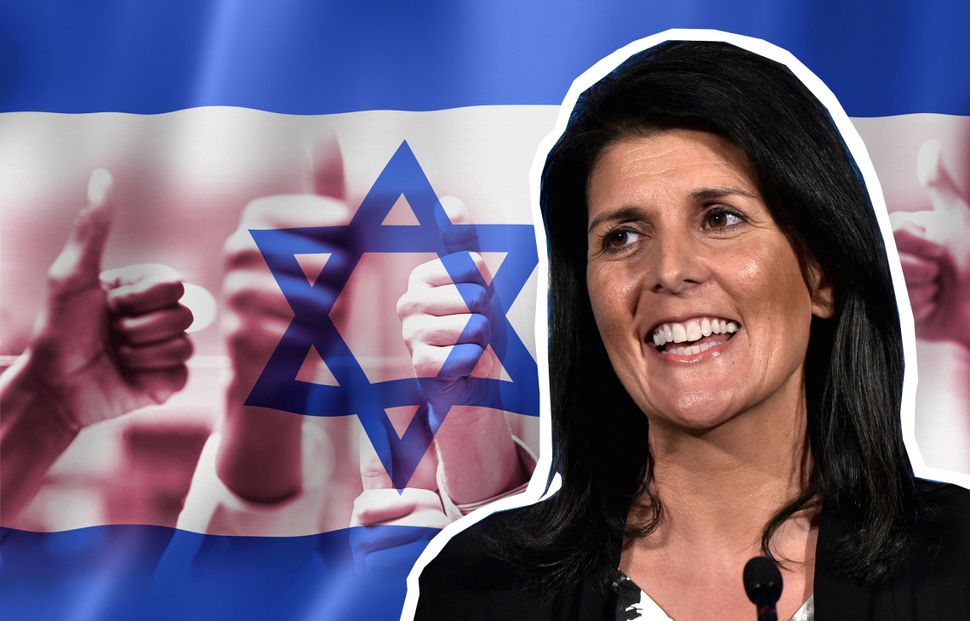 WASHINGTON (JTA) – The Trump administration will not allow a repeat of last year’s United Nations Security Council Resolution condemning Israel for its settlements, the ambassador to the body, Nikki Haley, told AIPAC.

“Never again do what we saw with resolution 2334 and make anyone question our support” for Israel, Haley said Monday at the annual American Israel Public Affairs Committee conference, where she earned the warmest reception of all of this year’s speakers, with an extended standing ovation.

The Obama administration allowed through the anti-settlements resolutions in December as one of its last acts, triggering bitter recriminations from Israel’s government.

Haley described her determination to help steer the course of the United Nations and its agencies from anti-Israel bias, noting her intervention keeping Salam Fayyad, the former Palestinian prime minister, from becoming the body’s envoy to Libya, and in getting U.N. Secretary General Antonio Guterres to withdraw a U.N. affiliate’s report likening Israel to an apartheid state.

Haley was one of a number of speakers at AIPAC who drew a sharp contrast at the conference between President Donald Trump’s administration and his predecessor, President Barack Obama.

“We had just done something that showed the United States at its weakest ever,” she said of the resolution.

AIPAC has striven to promote bipartisanship as a theme this conference, seeking to heal wounds with Democrats opened over divisions with Obama over settlements and the Iran nuclear deal.

Republican speakers have not been able to resist digs at Obama.

“What I wanted to make sure of was that the United States was leading again,” said Haley. “I wear high heels, it’s not for a fashion statement, it’s because if I see something wrong I will kick it every single time.”

Ryan described the Iran nuclear deal, which swapped sanctions relief for Iran’s rollback of its nuclear program, as an “unmitigated disaster” but – like Vice President Mike Pence, who spoke Sunday – stopped short of proposing dismantling the deal, as Republicans consistently had during last year’s campaign. Instead, he endorsed AIPAC-backed bipartisan legislation that would increase non-nuclear-related sanctions on Iran for testing nuclear missiles and backing terrorism and other disruptive activity.

The top two foreign operations officials in the House struck a bipartisan note, appearing together Monday to back AIPAC’s bid to stop President Donald Trump’s proposed cuts to foreign assistance.

Reps. Kay Granger, R-Texas, a moderate Republican who is the chairwoman of the foreign operations subcommittee of the Appropriations Committee, and Rep. Nita Lowey, the ranking Democrat on the subcommittee and on the committee, have worked together on foreign assistance for years.

Without naming Trump, they said his proposal to slash foreign assistance funding by almost a third – even while preserving present levels of assistance for Israel – would harm U.S. interests.

“Foreign assistance supports a crucial role in national security,” Granger said, “and makes up just a small portion of the national budget, less than one percent.”

Added Lowey: “The United States gets a major payoff.”

AIPAC says the broader foreign assistance package advances U.S. leadership, better enabling Israel’s ally to defend it in international forums and to open doors for Israel in countries that might otherwise be wary of ties.

Foreign aid came up again later in the evening when Rep. Steny Hoyer, D-Md., the minority whip, joined Rep. Kevin McCarthy, R-Calif., the majority leader, to deliver what has become the standard declaration at AIPAC conferences of bipartisan support for Israel by House leadership.

The leaders spoke of working closely on Israel, including their leading tours of Israel for House freshmen, sponsored by the American Israel Education Foundation, an Aipac affiliate.

Arne Christenson, who manages public policy for AIPAC, asked both leaders to comment on overall foreign aid. McCarthy, a conservative who was among the first congressional leaders to back Trump last year, avoided an answer, focusing only on the need for assistance to Israel.

“To the extent that Israel (aid) is a larger and larger focus, it will raise controversy,” he said.