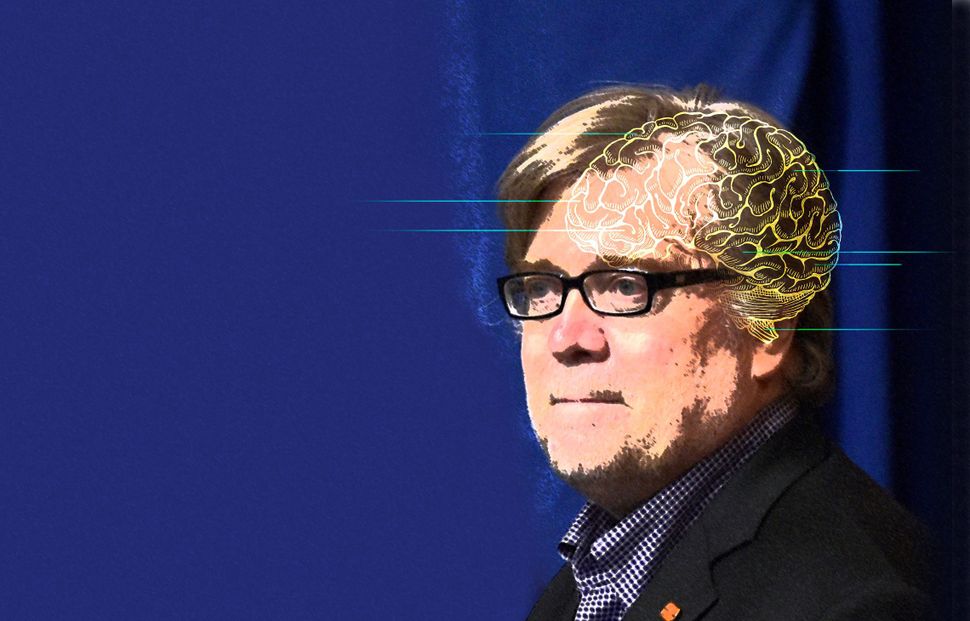 Reactions from liberal U.S. Jewish and civil-rights organizations came swift and strong to the news that President Donald Trump had removed Stephen Bannon, his polarizing chief strategist, from the National Security Council on Wednesday.

The move was part of a wider reorganization of the NSC, ordered by Trump on Tuesday. The NSC is a key body in any administration, advising the president on matters of national security and foreign policy. Intentionally apolitical, its members include cabinet officials, senior national security advisors and the director of national intelligence. Bannon is the former head of Breitbart News, and he has boasted that he made the news and commentary website into a platform for the anti-Semitic so-called alt-right, a movement that has been described as a mix of racism, white nationalism and populism. He brought Sebastian Gorka, a member of a far-right Hungarian group and a former editor at Breitbart, into the White House as a top advisor on terrorism.

With Bannon in the NSC, “it was the first time there was a political strategist in that role and it diminished the administration,” said Ron Halber, executive director of the Jewish Community Relations Council of Greater Washington. The NSC “needs to not be colored by political motivations, and removing Bannon will be viewed positively by most Americans, whether they are Jewish or not,” Halber told Haaretz.

Other groups echoed Halber’s views, with many saying said they wanted Trump to go even further and boot Bannon from the White House entirely.

“Removing Steve Bannon from the NSC is a small step in the right direction, but we won’t be satisfied until he’s removed from the White House,” said J Street spokeswoman Jessica Rosenblum.

“We hope that Stephen Bannon’s removal from the National Security Council will soon be followed by his ouster from the White House entirely,” said Richard Cohen, president of the Southern Poverty Law Center.  “By his own admission, Bannon provided a platform, through Breitbart News, for a new breed of white supremacists.  He’s also been responsible for the bizarre appointment of former Breitbart writer Sebastian Gorka, someone with ties to anti-Semitic, far-right groups in Hungary, to a position in the White House. The sooner that Bannon and people like Gorka leave Washington, the better.”

Rabbi Jill Jacobs of T’ruah: The Rabbinic Call for Human Rights, struck a similar note, telling Haaretz, “This is a positive first step, but we cannot rest until Stephen Bannon is removed from his post as chief strategist.

“A person who once ran the most important website promoting white supremacy, and who has declared his intention of sowing chaos in the world has no business in the White House,” Jacobs said.

Stosh Cotler, CEO of Bend the Arc Jewish Action, a progressive Jewish group, and Salam al-Marayati, president of the Muslim Public Affairs Council, issued an unusual joint statement declaring Bannon’s removal from the NSC a victory for the resistance to Trump and his appointees and policies.

“The removal of Steve Bannon from involvement in the critical responsibilities and decisions of the National Security Council is a major victory, not only for those outraged by his white supremacist, anti-Muslim and antisemitic ideology, but for the safety of all Americans,” they wrote, adding, “It also demonstrates that the resistance forming across the country to oppose Trump’s radical, hateful agenda is having a tangible and growing impact on his floundering administration.” Predictably, the head of the Zionist Organization of America lamented the change in Bannon’s status, if somewhat half-heartedly.

“Steve Bannon’s strong understanding of the international scourge of radical Islamic terrorism and his great support of Israel is somewhat of a loss,” ZOA President Mort Klein told Haaretz. “Yet Bannon continues to be one of the president’s closest advisors on such issues.  And [National Intelligence Director Dan] Coats’ elevation at the NSC, who is also a great friend of Israel, will in part make up for Bannon’s direct absence,” Klein said.

The Reform movement, which in November said it was “deeply disturbed” by Bannon’s appointment as Trump’s senior strategist, declined to comment on his ouster. So did the Anti-Defamation League, which has been vocal about the dangers posed by Bannon. But Washington insider Ron Klein, a former Democratic member of the House of Representatives from south Florida, said he doesn’t view Bannon’s removal from the NSC as a big shift in his status.

Bannon “is still in the White House and still has the president’s ear on foreign affairs, and still hasn’t changed his stripes on nationalist views and isolationism, which are all things which don’t square with the U.S.’s best interests in the minds of most Americans,” Ron Klein said. He added that Bannon’s ouster “isn’t necessarily a big change of position,” saying that if Bannon “continues to be one of the last people to speak in Donald Trump’s ear before the president makes a decision, then nothing has changed,” he said.