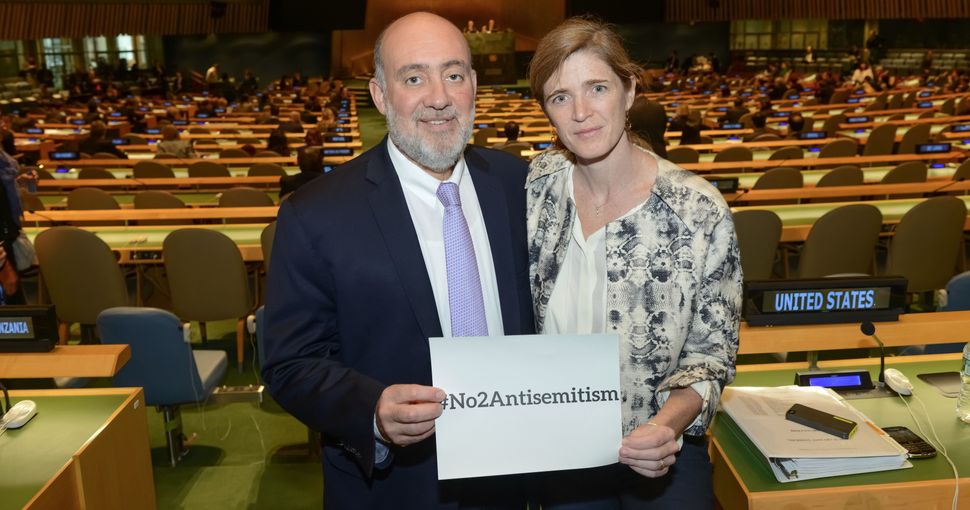 On Thursday, JTA reported that the office of the U.S. Special Envoy to Monitor and Combat Anti-Semitism could be left empty indefinitely. Trump has yet to fill the envoy post, and the office’s staff is set to be eliminated later this month due to a wider State Department directive. The envoy is traditionally responsible for keeping tabs on global anti-Semitism and advising other countries in fighting it.

In response to the report, Democratic Reps. Nita Lowey of New York and Ted Deutch of Florida have called on Trump to fill the post immediately.

“If this office is gutted, terrible,” Power tweeted on Thursday. “Anti-semitism is surging in world. Entire Trump admin needs to focus on it & envoy position must be kept.”

Lowey linked the news to White House Press Secretary Sean Spicer’s gaffe this week in which he falsely claimed that Adolf Hitler didn’t use chemical weapons against civilians. She said Trump has sent “mixed messages” regarding anti-Semitism.

“From his reluctance to disavow David Duke during the early days of his presidential campaign through his chief spokesman’s recent attempt to minimize the horrors of the Holocaust, President Trump has sent mixed messages regarding his commitment to combatting anti-Semitism,” Lowey’s statement said.

The last person to fill the post was Ira Forman, who was appointed by President Barack Obama in 2013 and served until Trump’s inauguration. Forman and his predecessors contributed to State Department reports on human rights and religious discrimination. They also worked through other government bodies to ensure that Jewish communities globally were protected from violence and helped Jewish refugees escape danger.