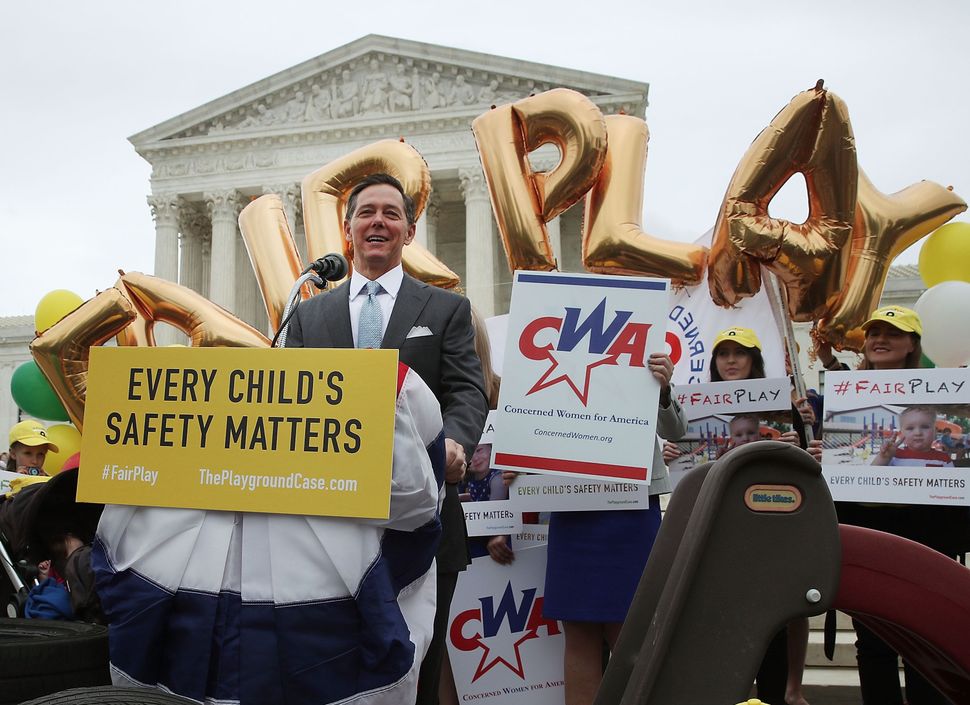 Protestors rallying April 19, 2017 in support of government funding for religious institutions outside the Supreme Court during a hearing on the Missouri playground case Image by Getty Images

A case before the Supreme Court could mark a major milestone in defining the boundaries of church and state separation, but it also might end with a whimper — and the actions of Eric Greitens, Missouri’s new Jewish Republican governor, could make the difference.

The debate started with a 2012 request by the Trinity Lutheran Church of Columbia for a state grant to pay for paving of its playground with a surface made of used tires. The Missouri Department of Natural Resources, which manages the scrap tire program, rejected the request due to the state’s policy of not funding religious institutions. Thirty-nine states have similar rules. The church sued and the case reached the Supreme Court, which heard oral arguments Wednesday in Trinity Lutheran Church of Columbia v. Comer.

But a week before the hearing, Greitens stepped in and announced that he was revoking the rule. “Before we came into office, government bureaucrats were under orders to deny grants to people of faith who wanted to do things like make community playgrounds for kids. That’s just wrong,” the governor said in a statement. “So today we are changing that prejudiced policy.” 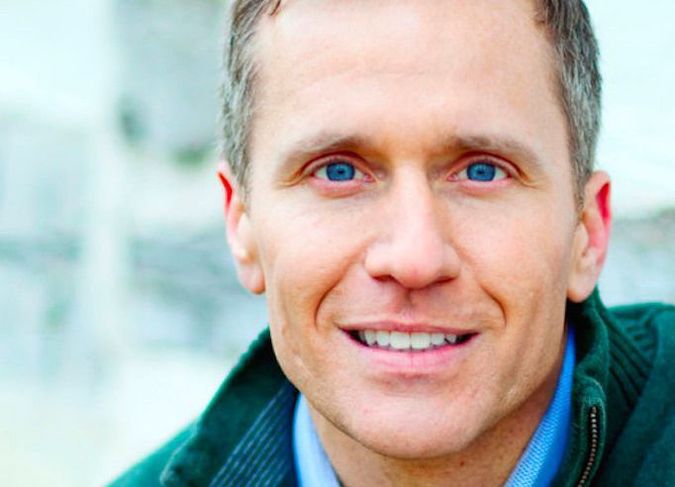 By doing so, the newly elected governor, who grew up going to a Reform synagogue, broke rank with a position strongly held by that denomination and by many major American organizations, and sided with a stance being advocated by both evangelical Christians and Orthodox streams of American Jewry.

The Union for Reform Judaism, alongside Hadassah, the Anti-Defamation League and the Jewish Social Policy Action Network, joined an amicus brief filed to the court in support of the rule banning taxpayer dollars from going to religious entities. “The decision of the people of Missouri to leave the support of churches to church members is a valid and important means of protecting the religious freedom of all individuals and all religious denominations,” the brief stated.

But the Orthodox Union, in a brief that was quoted during the hearing by Justice Samuel Alito, argued in favor of granting the state funds to the church. The group made the point that government programs open to all should also be accessible to religious institutions. “We don’t believe the government needs to fund religious activity,” Nathan Diament, the O.U.’s executive director of public policy and the co-author of the amicus brief, said in an interview. “But if the government allocates funds for secular activity, it would be wrong to say that because you’re religious you won’t get it.” The O.U. pointed to the Homeland Security grants provided for over a decade to religious institutions, mainly Jewish, for bolstering security as an example of government funding that does not exclude religious institutions.

For both sides debating the matter, the case goes beyond the Missouri playground. A ruling in favor of state funding could set a precedent for all other states that bar funding for religious institutions under similar rules, an outcome for which many conservatives are hoping. A ruling that upholds the ban would, on the other hand, deliver a setback for those wishing to chip away at the wall separating church and state.

But Greitens’s decision to overturn the rules and allow the funding has changed the entire dynamics of this court case and has thrown the parties into disarray. The State of Missouri found itself sending a former attorney general to the Supreme Court to argue in favor of a position it no longer holds. And justices on the bench wondered aloud why is there a need to hear the case if the circumstances leading to it have been reversed.

“Why isn’t the case moot?” inquired Justice Stephen Breyer, who noted that Greitens “said he’s going to give the grants.” But both sides of this debate made clear they want the case to proceed despite Greitens’s decision to allow the funding, in the hope that a Supreme Court ruling will ground the issue beyond Greitens’s term and beyond the State of Missouri.

“What the governor did is very nice, but it’s more important that we get a Supreme Court ruling,” Diamond said.

Greitens had considered himself a Democrat until recently. In 2015 he explained that he no longer believes in the liberal values he had grown up with, and in a Fox News article he claimed that many liberals are no more than “world-class hypocrites.” During his gubernatorial campaign, Greitens stood out among Republican candidates in his opposition to legislation that would provide a legal shield to businesses refusing to service same-sex couples on the grounds of “religious liberty.”

Greitens’s action, initially seen as a gesture toward those seeking more government funding for religious institutions, could, in fact, end up with the Supreme Court limiting the scope of its decision, thus denying conservative groups the chance to see a broad definitive ruling on the issue.

The nine justices will deliver their decision toward the end of this year’s judicial term.