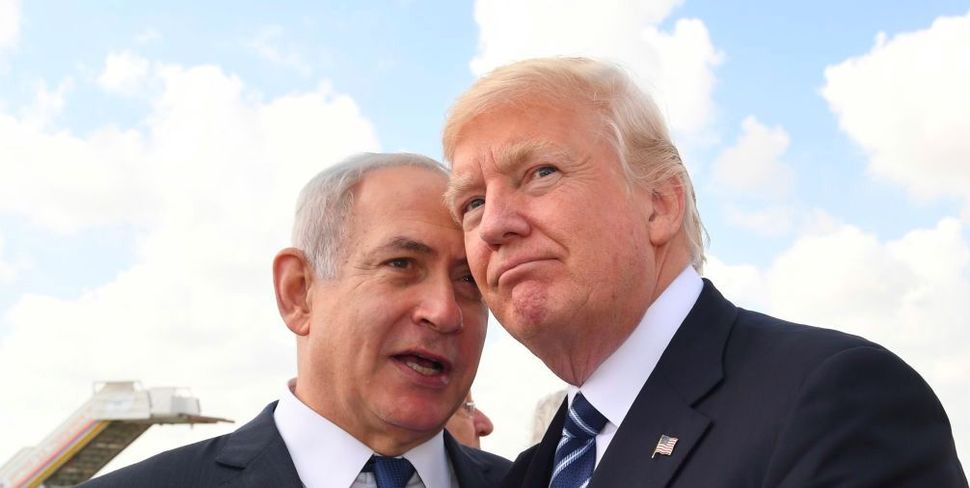 President Donald Trump used his centerpiece Holy Land speech on Tuesday to reaffirm his commitment to peace between Israelis and Palestinians, but he offered no new details on how to achieve a goal that has eluded U.S. leaders for decades.

Rounding out a 28-hour stay in Jerusalem, Trump praised Israeli Prime Minister Benjamin Netanyahu and Palestinian President Mahmoud Abbas alike, saying both were ready for peace. But he avoided any mention of a Palestinian state and did not address a campaign promise to move the U.S. Embassy from Tel Aviv to Jerusalem, something Netanyahu yearns for.

“I had a meeting this morning with President Abbas and can tell you that the Palestinians are ready to reach for peace,” Trump said in a speech at the Israel Museum in Jerusalem.

“In my meeting with my very good friend Benjamin, I can tell you also that he is reaching for peace. He wants peace,” he said. “Making peace, however, will not be easy. We all know that. Both sides will face tough decisions. But with determination, compromise, and the belief that peace is possible, Israelis and Palestinians can make a deal.”

While Trump has spoken frequently in the months since taking office of his desire to achieve what he has dubbed the “ultimate deal,” he has not fleshed out any strategy that he or his administration might have towards achieving it.

He also faces mounting difficulties at home, where he is struggling to contain a scandal after firing James Comey as FBI director two weeks ago, and a widening investigation into his administration’s connections to Russia.

Trump has appointed his son-in-law, Jared Kushner, as a senior adviser on brokering an Israel-Palestinian deal, while Jason Greenblatt, formerly a lawyer in his real estate group, has taken the day-to-day role of liaising with leaders and officials in the region on the nitty-gritty of a solution.

The last talks between the Israelis and Palestinians, led by former U.S. secretary of state John Kerry, broke down in April 2014 after around a year of largely fruitless discussion.

While both Netanyahu and Abbas reiterated during Trump’s visit a commitment to peace, both also face domestic constraints on their ability to maneuver or compromise.

Netanyahu must deal with opposition from right-wing nationalist elements within his coalition who oppose any Palestinian state being created in occupied territory where hundreds of thousands of Jewish settlers now live.

For its part, Abbas’s Fatah party is at sharp odds with the Islamist group Hamas, which is in power in Gaza, leaving no unified Palestinian position on peace.

During his time in the region, part of a nine-day foreign trip that has taken in Saudi Arabia and will be followed by the Vatican, Italy and Belgium, Trump spent barely an hour with the Palestinians. He traveled eight km (five miles) south from Jerusalem to Bethlehem, in the occupied West Bank, to see Abbas.

His speech at the Israel Museum touched on the Jewish connection to the Holy Land, earning applause from the audience, which included Sheldon Adelson, a U.S. billionaire and active political supporter of both Netanyahu and Trump.

The address followed a visit to Yad Vashem, the Israeli Holocaust Memorial, where Trump and his wife Melania laid a wreath and the president spoke about the horrors of Nazi Germany’s annihilation of six million Jews.

“The ties of the Jewish people to this Holy Land are ancient and eternal,” Trump said at the Israel Museum. “They date back thousands of years, including the reign of King David, whose star now flies proudly on Israel’s white and blue flag.”

He also underlined Christian and Muslim connections, faiths that took root in the land between 1,400 and 2,000 years ago. To this day, the Old City of Jerusalem is divided into four quarters: Christian, Muslim, Armenian and Jewish.

“This city, like no other place in the world, reveals the longing of the human heart – to know and worship God,” said Trump.

While Israel regards all of Jerusalem as its “eternal and indivisible” capital, the Palestinians want the east of the city, which Israel captured in the 1967 Middle East war, as the capital of their future state.

Given the pressure his young presidency is under in Washington, analysts have praised famously off-the-cuff Trump’s careful sticking to script so far on his maiden overseas tour.

At the same time, his verbal commitment to tackling arguably the world’s most intractable conflict has not been matched by bold ideas or new initiatives.

Instead, he appears keen to build confidence and assure Netanyahu and Abbas of wider Arab support in the region for peace moves, in the hope they might see fit to take steps and negotiate themselves.

“I intend to do everything I can to help them achieve that goal,” Trump said after meeting Abbas, speaking with the 50th anniversary of Israel’s capture of territories that Palestinians seek for their own state approaching early next month.

During meetings with Netanyahu on Monday, Trump focused his comments on the threat from Iran, but also talked about the opportunities for peace in the region and how Saudi Arabia and other Arab nations were shifting their stance, potentially opening a window towards a regional agreement.

One of the long-standing regional proposals is a Saudi peace initiative that was first put forward in 2002 and has been re-endorsed several times since.

In effect, it would offer Israel recognition by the Arab world and the “normalization” of relations in exchange for a full withdrawal from the territory Israel has occupied since the June 1967 Middle East war, including East Jerusalem. It also urges a “just settlement” of the Palestinian refugee problem.

Netanyahu has expressed tentative support for parts of the initiative, but there are many caveats on the Israeli side, including how to resolve the ever more complex refugee issue and whether Israel would withdraw from the Golan Heights, strategic territory that Israel took from Syria in the 1967 war.