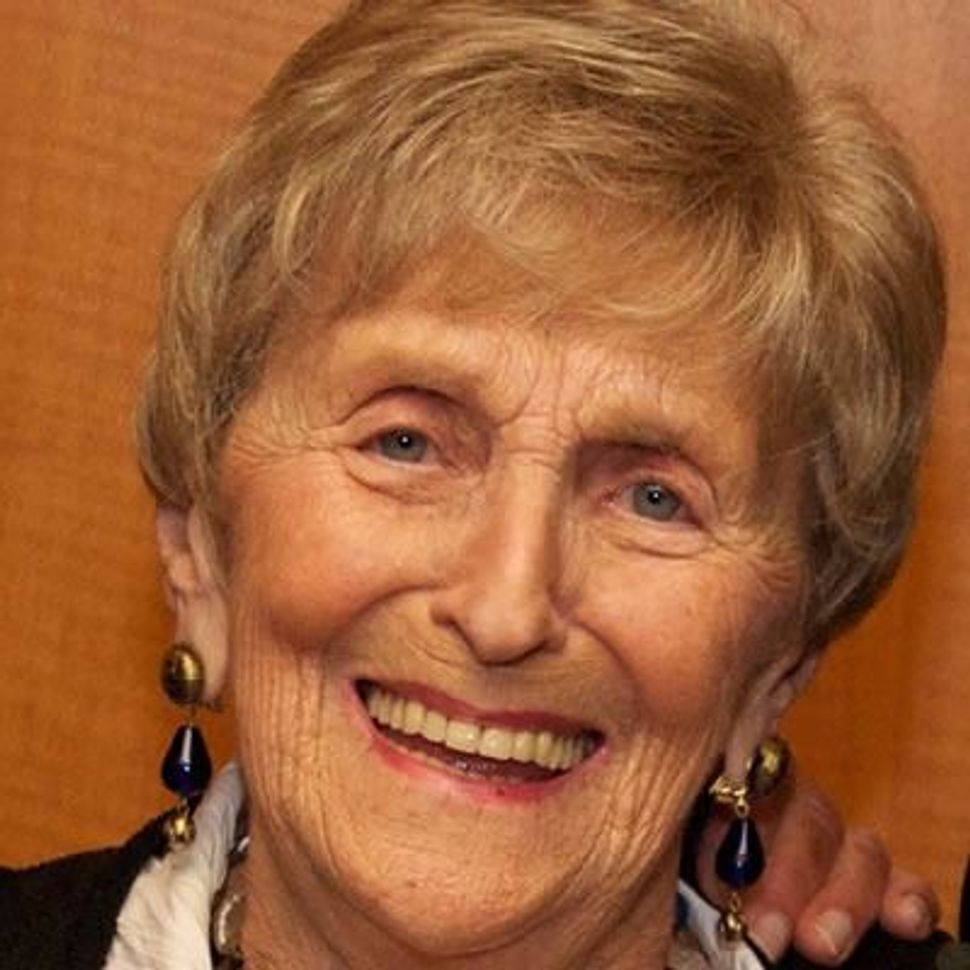 Sara Ehrman, a political trailblazer who served for decades as a leader of Jewish and pro-Israel groups and also played a crucial role in the life of a young Hillary Rodham Clinton, died on Saturday in Washington, D.C. at the age of 98.

Born April 24, 1919 — the year before American women were given the right to vote — Ehrman was one of few women working in important roles in Washington in the 1960s and 70s, working as a staffer and lobbyist on Capitol Hill and on George McGovern’s 1972 presidential campaign. She went on to take a high-level position at AIPAC in the 1980s, building a network of pro-Israel advocates in every congressional district and rising to become the lobbying group’s National Political Director.

However, she became disillusioned with the organization unquestioning support of Israel and went on to co-found Americans for Peace Now. She continued to work in the U.S.-Israel field as a senior adviser to the S. Daniel Abraham Center for Middle East Peace into her nineties, meeting in 2011 with then-Palestinian Authority Prime Minister Salam Fayyad in the West Bank when she was 92.

Born Sara Teitelbaum in Staten Island, her mother died when she was 8, and she was sent for a few years to live with her aunt and ten cousins in Manhattan. She was greatly influenced by their passion for left-wing politics. “At a very young age, they sent me out on the street with a can to collect money for the Abraham Lincoln Brigade, which was the American brigade that went to volunteer in the Spanish Civil War,” she recalled in a 2015 Washington Post interview.

She was also active in the left-wing Zionist group Poale Zion, which upset her father, who called her a “goddamned communist.”

“I’m not a communist. I’m a Zionist,” Sara would respond.

Her father would retort, “it’s the same goddamned thing, and I want you to cut it out and do your homework.”

While Sara did well in most classes, she flunked chemistry, and refused to retake the class in summer school, even though it cost her a spot at Barnard.

She soon married her husband Libert and moved to Winston-Salem, N.C., where he was stationed during World War II. Her first job was as a “stripper” – tearing perforated edges off computer paper. She and Libert had two sons, David and Daniel, before divorcing.

In the early 1960s, Ehrman worked in Washington, D.C. at the Religious Action Center, the social justice group affiliated with the Reform movement. The RAC was instrumental in lobbying for the passage of the 1964 Civil Rights Act, and Ehrman recalled seeing Dr. Martin Luther King come into the office to talk strategy with the group’s leaders.

Ehrman worked in the offices of Senators Joseph Clark and George McGovern from 1965 to 1972 before leaving D.C. to work on McGovern’s presidential campaign in Texas. It was there that she first met a young law student named Hillary Rodham, who volunteered in voter registration. Ehrman, McGovern’s state co-director of research, took a liking to Rodham, one of only a few women in the office. As two women working in a heavily-male field, “We immediately bonded as outsiders,” she recalled in a 2015 interview with JTA.

The following year, Ehrman was working as a lobbyist for the governor of Puerto Rico when she reconnected with Rodham, who was working on the Watergate hearings. Ehrman offered Rodham her son’s old room to rent, and the two lived together until 1974, when Rodham announced that she was moving to Arkansas to be with her boyfriend, Bill Clinton. Ehrman offered to drive her down to Little Rock, hoping to talk her out of marrying Clinton.

Ehrman and Clinton stayed close, and Ehrman served as the 1992 Clinton-Gore campaign’s head of Jewish outreach before taking a position in 1993 as the Democratic National Committee’s deputy political director. Ehrman worked on Clinton’s 2006 Senate reelection campaign and knocked on doors for her in Iowa in 2008. Ehrman was in Bill Clinton’s suite during the 2016 Democratic National Convention, and Hillary visited Ehrman in her assisted living facility a few weeks before her death.

Ehrman also served that year on the first advisory board of the dovish advocacy group J Street, where a JTA article described her as the “doyenne of Jewish Democrats.”