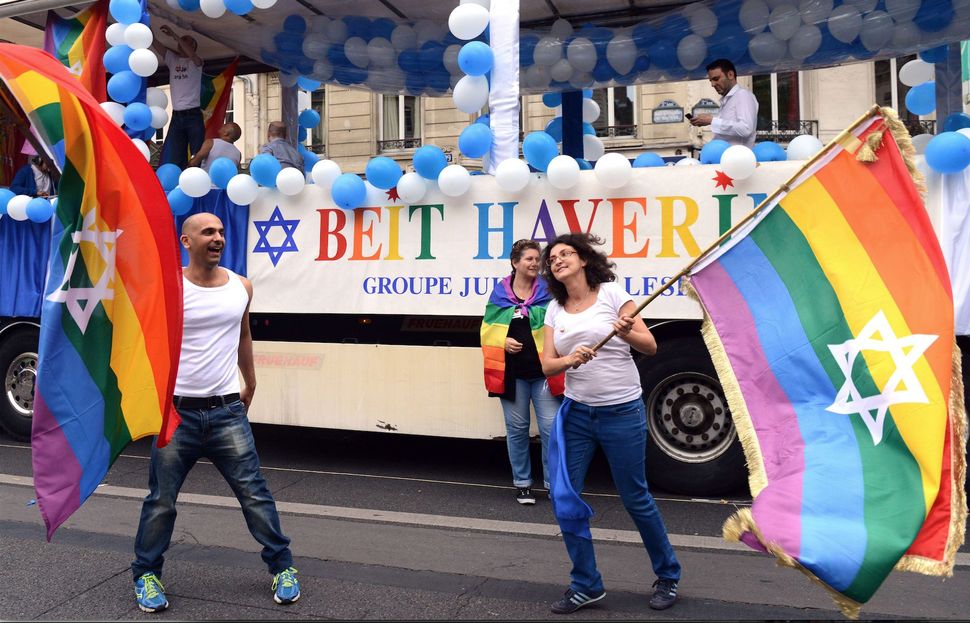 Jewish gay pride flags have been waved all over the world. Image by Getty Images

Organizers of the 21st annual Chicago Dyke March told the women that the rainbow flags with a white Star of David in the center would be a trigger to people they found offensive.

A Dyke March collective member told the Windy City Times that the women were told to leave because the flags “made people feel unsafe,” and that the march was “anti-Zionist” and “pro-Palestinian.”

More than 1,500 LGBTQ individuals and their supporters participated in Saturday’s march. The march was protested at one point by Christian extremists, according to the Windy City Times.

One of the Jewish marchers, Laurel Grauer, Midwest manager of A Wider Bridge, a group that forges ties between LGBT Jews in Israel and North America, told the publication that she has carried her Jewish Pride flag in the same parade for more than a decade, and said that it “celebrates my queer, Jewish identity.” She also said she lost count of the number of people who harassed her over the flag on Saturday.

“People asked me if I was a Zionist and I said ‘yes, I do care about the state of Israel but I also believe in a two-state solution and an independent Palestine,’” Grauer said. “It’s hard to swallow the idea of inclusion when you are excluding people from that. People are saying ‘You can be gay but not in this way.’ We do not feel welcomed. We do not feel included.”

“The flags that ‘triggered’ people were NOT a flag of the modern state of Israel, they are PRIDE flags adorned with the star of David. The star of David is, first and foremost, a Jewish symbol, long before the modern state of Israel was even a thought. It’s been a symbol of the Jewish people for centuries, and those marching put it on their flags to represent their intersectionality as LGTBQ+ JEWS. They were not using the dyke march to show support of Israel. They were not making a political statement regarding it. They were simply displaying who they are and that their religious faith is part of their identity. Removing those flags, and the people who marched with it, shows a deep level of ignorance, and yes, it also shows antisemitism masquerading as liberal values,” the post said.