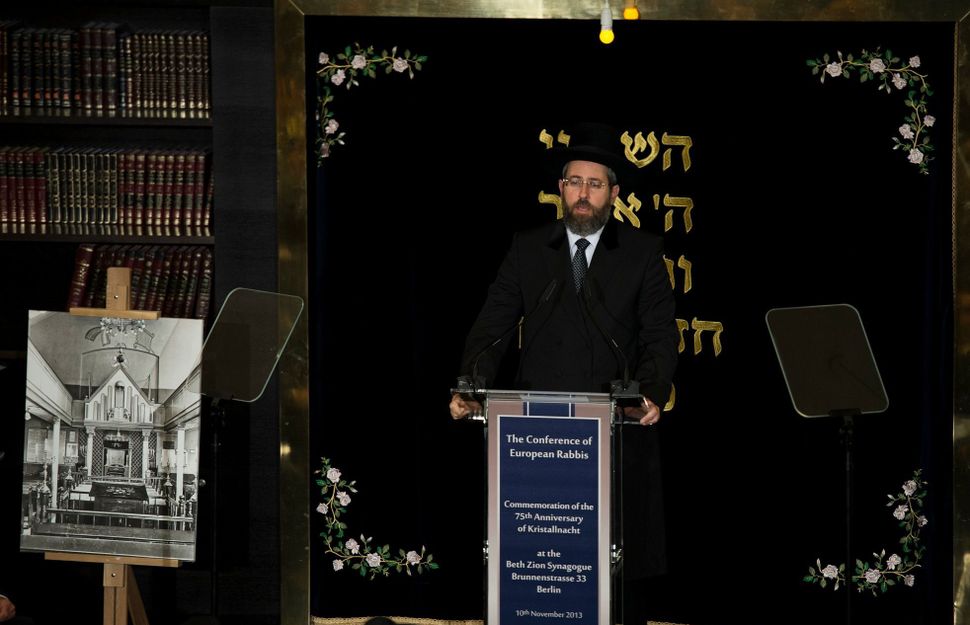 The Ashkenazi Chief Rabbi of Israel, David Lau, speaks at a Holocaust commemoration ceremony in Berlin. Image by Getty Images

(JTA) — Some 160 rabbis, including several prominent American Orthodox leaders, appear on a list of rabbis whom Israel’s haredi Orthodox-dominated Chief Rabbinate does not trust to confirm the Jewish identities of immigrants.

Rabbis from 24 countries, including the United States and Canada, are on the list. In addition to Reform and Conservative rabbis, the list includes Orthodox leaders like Avi Weiss, the liberal Orthodox rabbi from the Riverdale section of New York, and Yehoshua Fass, the executive director of Nefesh B’Nefesh, a group that encourages and facilitates American immigration to Israel.

The Chief Rabbinate controls all Jewish marriage in Israel, and immigrants who wish to wed there must first prove they are Jewish according to Orthodox law. This proof often comes via a letter from a community rabbi attesting to the immigrant’s Jewish identity. One midlevel bureaucrat at the rabbinate, Rabbi Itamar Tubul, handles every claim.

The publication of the list comes on the heels of a clash between American Jewish leaders and the Chief Rabbinate over how to determine Jewish identity. In June, Israel’s Cabinet advanced a bill that would give the Chief Rabbinate authority over all official Jewish conversions within Israel. Following an outcry from Jewish leaders in America, the bill was shelved for six months.

The Chief Rabbinate’s antipathy to Reform and Conservative rabbis is well documented. Its distrust of some Orthodox rabbis abroad was seen last year when the rabbinate omitted several prominent Orthodox figures from a list of rabbis it trusts to confirm the authenticity of Jewish conversions.

The rabbinate’s latest list comprises rabbis whose letters it rejected during 2016. In addition to Weiss and Fass, the list includes Joshua Blass, a New York congregational rabbi and student adviser at the modern Orthodox Yeshiva University’s rabbinical seminary; Joseph Potasnik, executive director of the New York Board of Rabbis; Adam Scheier, a past president of the Montreal Board of Rabbis, and Daniel Kraus, director of education at Kehilath Jeshurun, a tony modern Orthodox synagogue on Manhattan’s Upper East Side.

The rabbinate sent the list to Itim, a nonprofit that guides Israelis through the country’s religious bureaucracy, and was obtained Thursday by JTA. In 2015, Itim filed a freedom-of-information request in a Jerusalem municipal court demanding a list of approved foreign rabbis, and received this list as part of that case.

Rabbi Seth Farber, Itim’s executive director, called it a “blacklist” because it shows which rabbis the rabbinate has not trusted in the past. He has  called repeatedly for greater transparency in the rabbinate’s evaluation of rabbis, and said the way it is being handled is a “stain on the state of Israel.”

“They’re effectively creating a blacklist,” Farber told JTA. “The dimensions are greater than we could have ever imagined, and the disregard with which they treat rabbis from around the world is astounding.”

The Chief Rabbinate’s spokesman, Kobi Alter, said in a phone interview Thursday that “there is no list of unrecognized rabbis” and did not respond to a follow-up inquiry via email. Last year, the rabbinate promised to release criteria regarding which rabbis can be approved. Alter told JTA that the criteria are still being composed.

In an email to Itim obtained by JTA, Tubul, the rabbinate official, wrote that letters are approved “based on a collection of data, not based on the name of the rabbi,” and added that “unequivocally, the attached names do not imply recognition or rejection of other rabbis not mentioned here.”

Weiss’ inclusion is the latest blow he has absorbed from the right wing of Orthodox Judaism, whose leaders have objected to his efforts to expand women’s participation in Orthodoxy.

“The way they’re conducting themselves is so painful, so unfortunate,” Weiss told JTA on Friday. “The pain that I feel is not personal. It’s that this rabbinate is an arm of the State of Israel, and that we have reached this point is nothing less than a tragedy.”

In 2013, the rabbinate rejected a proof-of-Judaism letter from Weiss, then reversed course and accepted it following complaints from American Jewish leaders. Last year, the rabbinate rejected a similar letter from Rabbi Haskel Lookstein, Kehilath Jeshurun’s former rabbi and the rabbi who oversaw the conversion of Ivanka Trump. It also rejected conversions overseen by Rabbi Gedalia Dov Schwartz, the chief presiding judge of the National Beth Din of the Rabbinical Council of America, the main modern Orthodox rabbinical court in the United States.

In some cases, Tubul made the rejection. But in Lookstein’s case, a district rabbinical court in the central Israeli city of Petach Tikvah rejected his imprimatur when a woman who converted under his auspices applied for a marriage license there and was denied.

These rejections have caused consternation among American Orthodox leaders who are invested in maintaining a good relationship with the Chief Rabbinate. But following Weiss’ initial rejection in 2013, former rabbinate spokesman Ziv Maor told JTA that examining the credentials of Orthodox rabbis is crucial to the integrity of the evaluation process.

“The testimony needs to be according to Jewish law and the witness needs to have the fear of heaven,” Maor told JTA. Regarding Weiss, he added, “We’re talking about someone on the fringes of Orthodoxy.”

Rabbi Baruch Goodman, who runs the Chabad-Lubavitch center at Rutgers University in New Jersey, said he was surprised to find out he was on the list. Goodman, who declined to be quoted, told JTA he has been writing proof-of-Judaism letters for nearly two decades without incident.

Scheier, the Montreal rabbi, said he was unfazed by his inclusion. He said he is working with Itim to encourage transparency and consistency in the evaluation of rabbis.

“I know I’m in good company on the list,” he told JTA on Friday. “There are wonderful, honest, unparalleled rabbis that have been blacklisted by the State of Israel. No one who knows me or knows my community or knows my rabbinate could question my capacity to attest to the Jewish identity of the members of my congregation.”