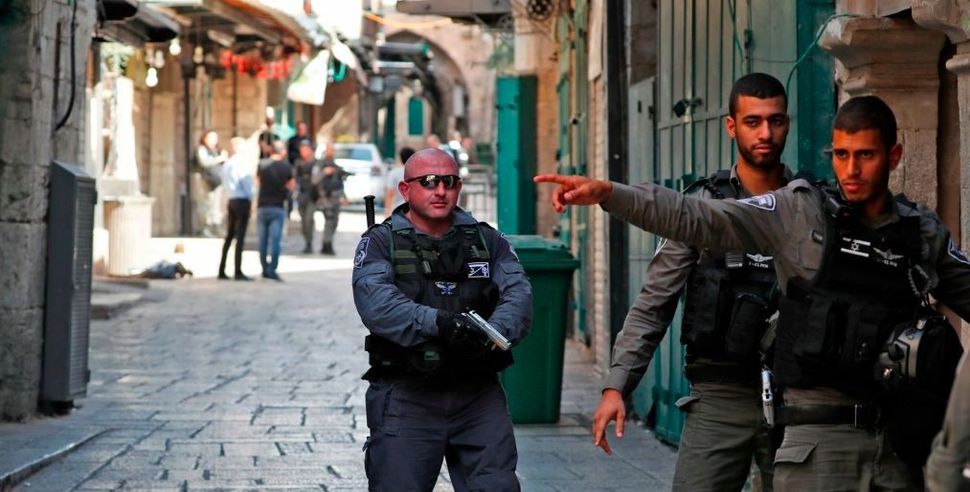 (JTA) — Two police officers were killed an another one was injured by Arab gunmen who opened fire on security forces in Jerusalem’s Old City.

At least three armed terrorists were killed in a gunfight with security forces during the incident Friday at the Lions’ Gate, which is situated directly northeast of the Temple Mount compound, the Israeli Broadcasting Corporation, or IBC, reported.

The police officers killed were Kamil Shanan, 22, and Hail Satawi, 30, Army Radio reported. The third officer hurt in the attack is in stable condition.

The attack occurred at around 7 a.m., police told the IBC, when the Temple Mount compound was largely empty. The gunmen fired on the police officers and proceeded to flee into an area housing several mosques before they were shot dead by security forces in pursuit. They were carrying a handgun and two “Carlo” assault rifles — makeshift weapons favored by Palestinian terrorists that are produced in metal workshops in the West Bank and Gaza.

The attack Friday was unusual because it was considerably bloodier and better organized than the dozens of terrorist attacks that Israel’s security services record each month in Jerusalem. Featuring semi-automatic weapons and multiple assailants, it constitutes a substantial escalation compared to most of the attacks, which feature the use of knives and homemade firebombs.

Mahmoud Abbas, the president of the Palestinian Authority, condemned the attack during a telephone conversation with Israeli Prime Minister Benjamin Netanyahu, the Israeli leader’s office said in a statement.

Attacks rarely occur so close to the Temple Mount compound, which also houses the Haram a Sharif mosque.

The suspected assailants were Arab Israelis, who are Palestinian, from Umm al Fahm, the Israel Security Agency said in a statement. The agency idetified them as Mohammed Hammed Abed al-Latif and Mohammed Ahmed Mafdl Jadarin, both 19, and Mohammed Ahmed Mohammed Jabarin, 29. They had no previous record of terrorist activity.

Gilad Erdan, Israel’s interior security minister, told Army Radio the “unusual and severe incident may require Israel to review its security arrangements around the Temple Mount.” And Ze’ev Elkin, the cabinet minister responsible for issues connected with Jerusalem, told the radio station the attack was possible because of Israel’s desire to allow freedom of worship to Muslims and others at the site.

“Though we want to allow freedom of worship to Muslims at the Temple Mount, we need to balance that with the desire to prevent the cynical use of precisely this holy site for staging terrorist attacks,” Elkin said.

Separately, an 18-year-old Palestinian was killed Friday morning during clashes with Israeli troops near Bethlehem, IBC reported. The Ma’an news agency identified him as Baraa Hamamda. An Israeli army spokesperson told Ma’an that during a detention raid in Bethlehem’s al-Duheisha neighborhood, Palestinians threw “explosive devices and blocks” at Israeli forces, who fired towards the youth.

The Israel Security Service recorded a total of 94 terrorist attacks against Israelis in June – a 35-percent drop over the previous month. Of those, 21 occurred in Jerusalem, compared to 29 were in May. One victim was killed in terrorist attacks in June, an Israel Border Police agent, and three other security personnel were wounded.