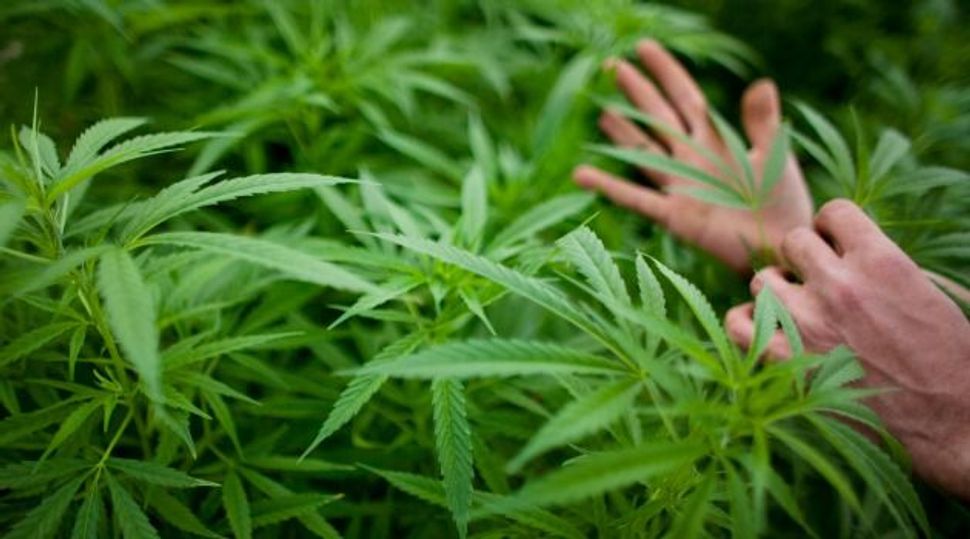 (JTA) — KIBBUTZ ELIFAZ, Israel (JTA) – By all accounts, Eilon Bdil has no personal interest in marijuana.

But as the business manager of Kibbutz Elifaz, he’s a big believer in the herb. Bdil sees medical marijuana as a unique opportunity to revive his remote Negev community.

“This cannabis gold rush has to pan out for us,” he said. “There’s simply no other choice. We need young people with good minds to come here, and medical cannabis is what can draw them.”

Elifaz is one of dozens of kibbutzim – and hundreds of local companies — seeking to join Israel’s new medical marijuana industry. After decades of stagnation, the collectives are betting that the move can revitalize their finances and even their way of life.

Israel’s gold rush – or “green rush,” as some are calling it – took off after the government in February threw its support behind legislation that would allow the export of medical marijuana. The Knesset is expected to pass the measure into law this summer — some industry insiders say as soon as this month. If that happens, Israeli companies would suddenly have access to a rapidly growing multibillion-dollar global industry.

Export is part of a larger government plan to make Israel a world leader in medical cannabis. Yuval Landschaft, the director of the Israeli Medical Cannabis Agency, said well over 700 companies have applied for official permission to grow, produce, distribute and dispense medical cannabis. By the end of the year, he said, the agency would give the OK to the first new medical marijuana farms and factories.

After playing a powerful role in founding and building Israel, the kibbutzim slid into social and economic crisis during the national financial crisis of the 1980s. Many young members decamped for the cities. By shifting away from their socialist roots — embracing differential salaries, members working off the kibbutz and non-members working on it — the kibbutzim, which number about 250, have largely stabilized.

Elifaz, located in the Arava Desert valley in southern Israel, is the only kibbutz that is already growing medical marijuana. It is one of just eight farms the government licensed to do so in 2010 as part of a limited system that will be replaced by the new one. (Recreational marijuana use is illegal in Israel, though it was recently largely decriminalized.)

So far, the medical marijuana business has not been particularly lucrative for Elifaz’s more than 100 members and children. The vast majority of its income still comes from date and pomelo farming and tourism. Just last year, the kibbutz began paying differential salaries to its members, a reform most of the once rigidly collective communities have made.

But Bdil, 42, who was born on Elifaz and returned to raise a family here, expects the years of experience to pay off when the exporting of medical marijuana starts. He said Elifaz also would benefit from its close ties with other kibbutzim. In the same way the kibbutz produces date honey and date liquor as part of a kibbutz conglomerate, Bdil said, it would one day manufacture cannabis products like extracts, creams and oils.

According to Nir Lobel, 37, Elifaz’s secretary, the kibbutz voted to get into the medical cannabis business in part because it seemed like a natural way to update the traditional kibbutz ethos — and hopefully attract a new generation of members.

However, Hagai Hillman — one of Israel’s eight licensed cannabis growers, who co-owns a marijuana-centered pharmaceutical company called BOL Pharma — says most of the kibbutzim and companies rushing into the industry are being overly optimistic.

“For those kibbutzim that don’t have money, medical cannabis is not going to be the answer. To survive in this market you need very deep pockets, and without vertical integration you’re lost,” he said, suggesting that profitable companies will control the medical marijuana supply chain from farm to pharmacy.

“A lot of farmers think it’s like growing melons. But the future of this industry is medicalization.”

Kibbutz Gezer, a largely American immigrant community located south of Tel Aviv, is exploring joining Elifaz in a medical cannabis business partnership with an Israeli pharmaceutical company. Laura Spector, a 62-year-old New Jersey native who immigrated to the kibbutz in 1977, is a leader of the project.

Spector said Gezer had only recently paid off the debt that it, like most kibbutzim, wracked up during the Israeli financial crisis in the 1980s, and was ready to invest. She shares Bdir’s interest in making a principled profit.

“I believe in medical marijuana because I believe in the plant, which can help in so many different ways,” she said. “At the same time, I think there will be a huge financial advantage to Kibbutz Gezer.”

According to Spector, Gezer’s main asset is its land, which is located in the center of the country and is licensed for mixed use. As such, it would be relatively easy to build processing facilities near the crops — a major advantage many kibbutzim have over other farms.

In contrast with Elifaz, Gezer is not motivated by a need for more members. The kibbutz is about 240 strong and expanding. It is building 16 houses for the founders’ children and new members, with plans to add 22 more in the coming years.

Rather, Spector said, she wants Gezer to enter the medical marijuana industry to create communal employment opportunities. For young people, the business could mean a career close to home, and for pensioners, it could provide the purpose and extra income of part-time work, she said.

“I was one of the people who pushed privatization on the kibbutz, but I think there’s a certain social and economic spirit that we should keep in some ways,” Spector said. “I mean, we came here for a reason.”

Few kibbutzim embody the spirit of the movement better than Kibbutz Ruhama, which was established near the border of the Gaza Strip in 1943, several years before the State of Israel’s founding. Today, the kibbutz’s main business is the struggling KR Hamivreshet brush factory, and most of its some 200 members are of retirement age.

According to kibbutz secretary Ran Ferdman, a 40-year-old third generation member, Ruhama voted overwhelmingly to partner with researchers to enter the medical marijuana industry, mostly in hopes of filling up their pensions funds, which were emptied during the kibbutz debt crisis.

“They believed the kibbutz would exist forever, and the younger generation would take care of the older one,” he said. “But everyone has to take care of himself these days.”