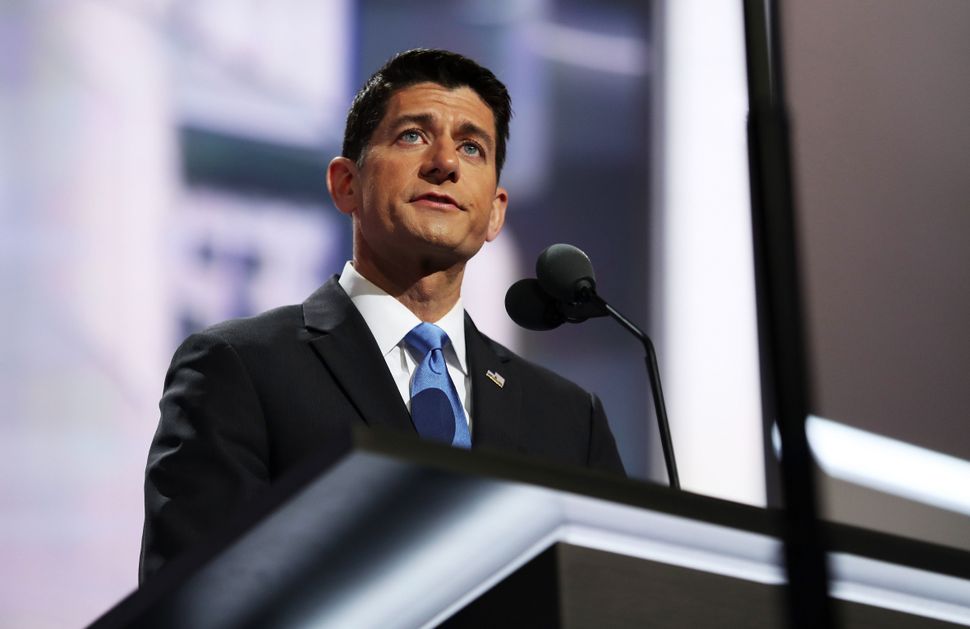 Speaker Paul Ryan on Day 2 of the RNC. Image by Getty Images

WASHINGTON (JTA) — Paul Ryan, the Republican speaker of the U.S. House of Representatives, dismissed a bid by Democrats to censure President Donald Trump as a “partisan hack-fest” after a rabbi in his Wisconsin district asked him to join because of what she said was Trump’s condoning of racism.

Rabbi Dena Feingold, who leads Beth Hillel Temple in Kenosha, began by noting that her family and Ryan’s had been friendly for decades. (Feingold’s brother, Russ, is a former Democratic senator from the state.)

“Given our shared upbringing, I’m sure that you are as shocked as I am at the brazen expressions, public expressions of white supremacy and anti-Semitism that our country has seen since the November election,” Feingold said at a town hall Monday televised by CNN.

“And our synagogue in Kenosha has had to have extra security hired and we’ve asked the Kenosha Police Department to help us out so that people can feel comfortable coming to our synagogue to gather,” she said. “And so following up on what’s been asked already, Speaker Ryan, as the leader of the congressional Republicans, I’d like to ask you what concrete steps that you will take to hold the president accountable when his words and executive actions either implicitly or explicitly condone, if not champion, racism and xenophobia. For example, will you support the resolution for censure?”

She was referring to a motion introduced last week by 75 House Democrats — led by Rep. Jerrold Nadler, D-N.Y., who is Jewish — that censures Trump for his “inadequate” response to the deadly violence in Charlottesville, Virginia, at a far-right rally earlier this month. Neo-Nazi, Ku Klux Klan and white supremacist protesters clashed there with counterprotesters, and a counterprotester was killed when an alleged white supremacist rammed a crowd with his car.

Trump said afterward that “many sides” were to blame for the violence, and that there were some “very fine people” on both sides.

Ryan said at the town hall that Trump had “messed up” in his responses, but the congressman also praised the president for a separate address delivered just before the town hall started in which he called for unity. His reply to Feingold was acerbic.

“I just disagree with you,” Ryan said. “I will not support that. I think that would be — that would be so counterproductive. If we descend this issue into some partisan hack-fest, into some bickering against each other, and demean it down to some political food fight, what good does that do to unify this country?”

The moderator, Jake Tapper, pursued the issue, noting the fears in the district among Jews and Sikhs, who were the targets of a lethal 2010 racist attack. The CNN newsman argued that the concerns about heightened racial tensions were not necessarily partisan.

“Forget his party for a second,” Tapper said. Trump is “giving aid and comfort to people who are fans of losing, discredited, hateful ideologies. ”

Ryan hesitated in his reply, but ultimately stood his ground.

Of Trump, Ryan said, “He needs to do better.”

The authors of the censure motion pushed back on Tuesday, saying in a statement that Ryan was shying away from moral accountability.

“In the wake of Charlottesville, Democrats and Republicans alike have been moved to reject the president’s ambivalent and wholly inadequate response to acts of domestic terrorism.” said a statement from Nadler’s office. “Many have gone so far as to condemn any attempt to project a moral equivalency between white supremacists, the KKK and neo-Nazis, and those who gathered to protest against the ‘Unite the Right’ rally and the racist ideals it represents. Yet Speaker Ryan remains silent, and continues to omit calling out the President directly for his morally repugnant statements.”