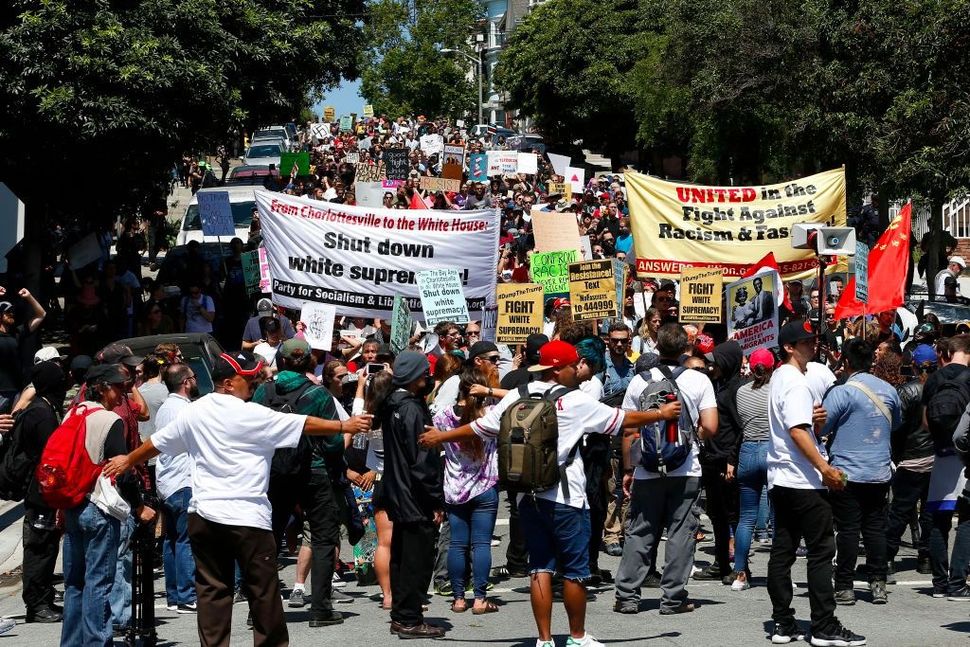 (JTA) — Rabbis from the San Francisco Bay area joined other faith leaders in gatherings against bigotry and racism a day after a two planned far-right rallies were canceled.

A planned Patriot Prayer gathering at San Francisco’s Crissy Field and a “No to Marxism” rally in Berkeley were canceled by their organizers late Friday afternoon, but the Jewish community’s determination to come together in the face of divisive and hate-based ideologies also swelled attendance at many Shabbat services in the evening, J. The Jewish News of Northern California reported.

More than 1,000 people filled nearly every seat at Congregation Emanu-El, with people from other synagogues and faith communities joining the Interfaith Gathering Against Hate. About 200 attended a similar event at Sherith Israel a half-mile away. Across the Golden Gate Bridge, 350 people gathered at Congregation Kol Shofar in Tiburon for an interfaith prayer service, co-sponsored by the Marin Interfaith Council. Many other congregations around the Bay, from Sonoma to Oakland to San Mateo, also met to raise their voices against the planned rallies and everything they represented, according to the report.

In the afternoon, the shofar was sounded on the steps of San Francisco City Hall when Sherith Israel Senior Rabbi Jessica Zimmerman Graf gave an invocation at the United Against Hate rally, attended by civic and faith leaders.

The Oregon-based pro-Trump group Patriot Prayer canceled its “Freedom Rally” for Saturday at Chrissy Field,  a recreational area near the Golden Gate Bridge, announcing instead a news conference which was later cancelled because the group lacked a permit for the venue, the Alamo Square Park, which the city also blocked.

Hundreds of counter protesters began marching on Saturday morning in Alamo Square Park, continuing until the afternoon, according to reports.

While Patriot Prayer has been described by the ADL as Alt-lite and not Alt-right, its rallies have attracted white supremacists and neo-Nazis.

An anti-Marxism rally scheduled for Sunday at Martin Luther King Jr. Civic Center Park in Berkeley, Calif., was also canceled after the event was never granted a permit.