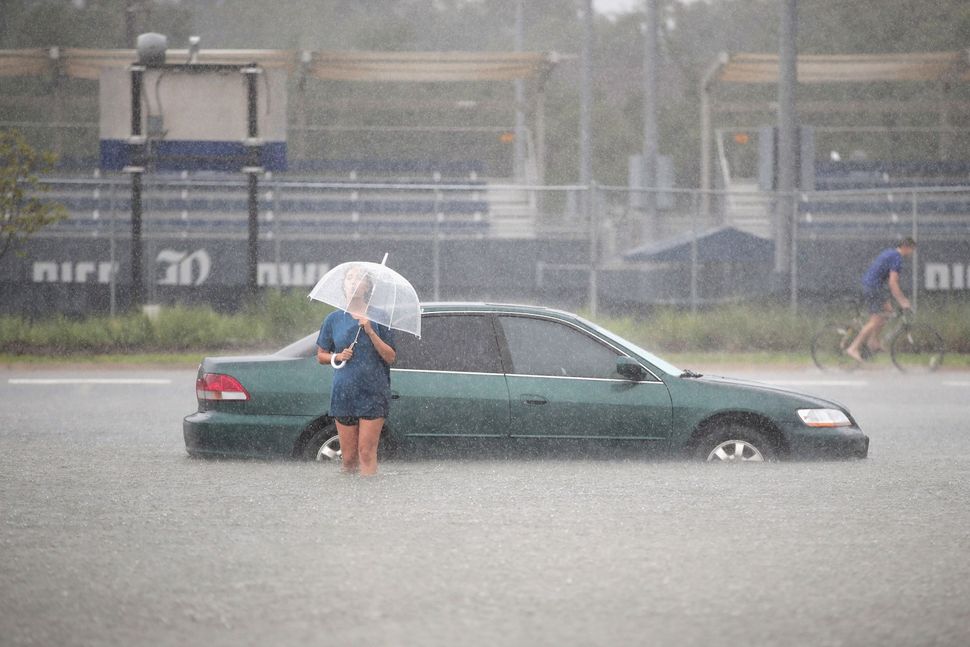 Mari Zertuche walks through a flooded parking lot on the campus of Rice University after it was inundated with water from Hurricane Harvey on August 27, 2017 in Houston, Texas. Image by Getty Images

College freshmen – many away from home for the first time in their lives – moved into Houston-area universities within the past couple of weeks. Now, Hurricane Harvey and the ensuing flooding have devastated their new home city.

Jewish students at Rice University and the University of Houston have been resilient in the face of the storm and have not been seriously affected by the disaster so far, campus professionals told the Forward.

“Students who live on campus are typically taken care of very well by those universities,” the executive director of Houston Hillel, Rabbi Kenny Weiss, told the Forward.

He was calling from the George R. Brown Convention Center in Houston, where he along with Jewish students and young professionals were volunteering to help those displaced by the hurricane.

“There are a myriad of ways to help out at a shelter at a time like this – helping to prepare food, providing pastoral care, being someone to listen…people who are here lost everything.”

Weiss praised the local universities’ preparations for the storm, as did the director of Rice’s Chabad Jewish Student Center, Rabbi Shmuli Slonim.

“I had a meeting with some of the staff at Rice last week unrelated to the storm, and we discussed their plan [for the storm, and] they had it down to a T,” he said. “All students that I know of are safe, they have enough provisions there, to the extent that the dean last night posted on Facebook that since Rice U is under order, they sent some of their team members to help within the city of Houston to help coordinate the relief efforts.”

Rice and UH, the two Houston-area universities with the biggest Jewish populations, are in areas that have been relatively undamaged from the storm, though floodwaters are continuing to rise.

But that doesn’t mean that life is unaffected: Weiss said that his home, which he evacuated on Friday because it was in an area prone to flooding, “is essentially unlivable and unrepairable” due to storm damage. And Slonim is hosting a local student who had been displaced.

The hurricane may also affect kosher food accessibility for students. Slonim said that Rice had asked him to provide hot kosher meals to students who are holed up at the university. “The local kosher establishment is now flooded,” Slonim explained.

They both said that Jewish campus life would continue as normally as possible (while exercising safety precautions). Chabad will host its “pizza and parsha” program on Tuesday night, and both will host Shabbat dinners. They are also both coordinating volunteer efforts for Jewish students to help begin fixing the damage in the city.

Students are “very interested in being able to help,” Weiss said. “That’s one of the things that people are looking to respond to. There are people who know how fortunate they are, and want to spend time” giving back.

Hillel is working with its national parent organization to coordinate service trips over winter and spring breaks for Jewish students across the country to come to Houston and continue repairs (which, Weiss noted, “takes money.”). And both Rice Chabad and Chabad of Houston are also coordinating ongoing volunteer efforts from both locals and others around the country, including food banking, cleanup and hosting displaced people.

The most important thing to remember, both said, is that recovery will take a long time.

“It’s probably going to take us a year to get back to where they were before,” Slonim said. Even if Houston recedes from news coverage, “Don’t think that it’s over. We’re still going to need resources and help.”