Houston Jewish Community ‘Could Take Years’ To Recover From Harvey 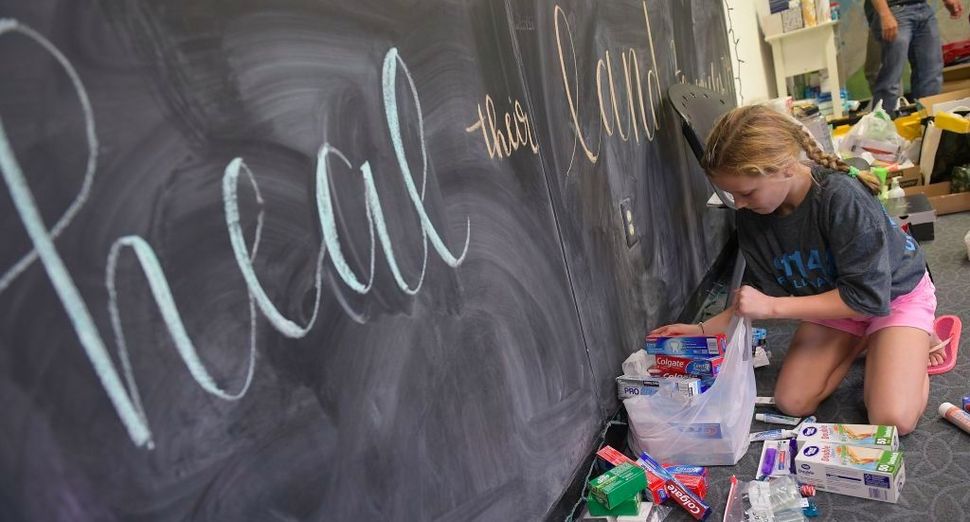 (JTA) — The Jewish community in Houston has seen “devastating” damage from Hurricane Harvey and could take years to recover, a federation official said.

“Recovery like this — it is a disaster larger than Katrina in terms of the amount of water that fell — we’re going to have short- and long-term recovery plans, but this is probably going to take us years to get back to where we were,” said Taryn Baranowski, the chief marketing officer for the Jewish Federation of Greater Houston.

Seventy-one percent of the city’s Jewish population of 63,700 lives in areas that have experienced high flooding, Baranowski told JTA on Wednesday. That includes 12,000 Jewish seniors.

Hurricane Harvey first made landfall on Friday evening near Corpus Christi, about 200 miles southwest of Houston. Local officials said at least 31 people are believed or suspected to have died due to Harvey, The New York Times reported Wednesday. Over 30,000 people are in shelters across the state, and rain was expected to continue in Texas until Friday, according to the Times.

Three of the city’s five major synagogues have experienced major flooding, Baranowski said. The federation is communicating with the rest of Houston’s synagogues – the area is home to 42 congregations and communities — but is focusing on helping people impacted by Harvey.

On Wednesday, the local Jewish Family Service said that dozens of Jewish families were either evacuated or moved to the second floors of their homes due to the flooding caused by Harvey.

Community members have seen up to eight feet of water in their houses, with some houses remaining flooded, Baranowski said.

“The majority of people have had to go to the second floor, and then be rescued from their second floor,” she said.

The Evelyn Rubinstein Jewish Community Center of Houston, the city’s only JCC, was flooded with 10 feet of water, and Jewish schools remain closed, with some experiencing major flooding.

“I’ll be completely transparent, it’s devastating,” Baranowski said. “This is a flood that no one could have anticipated it getting as bad as it did; it was a worst-case scenario. We live in a community that is densely populated in an area that got severely impacted by the weather.”

Kosher food is another issue.

Chabad in Houston has been providing kosher food to some community members, although supplies were running short as of Tuesday, according to Chabad.org. The Hasidic movement is organizing food shipments, including through Amazon, for the community. The Orthodox Union has also started a Help for Houston [website](https://www.ou.org/houston-crisis/?utm_source=SilverpopMailing&utm_medium=email&utm_campaign=Houston%20Flooding%2017%202%20(1 “website”)&utm_content=&spMailingID=16599815&spUserID=MjM1ODQwODAxNTUS1&spJobID=1044086900&spReportId=MTA0NDA4NjkwMAS2 “”).

The federation is collecting donations and will start distributing them on Thursday. It is working in conjunction with the Jewish Family Service and the JCC in the relief efforts. Baranowski said the priority in donations is cleaning supplies for those returning to houses that were flooded.

Local Jewish camps are housing refugees forced to evacuate their homes, and the Israeli humanitarian group IsrAID is coordinating an aid campaign, including sending volunteers to Houston.

In the face of disaster, the Jewish community remains unified, Baranowski said.

“We are a resilient community,” she said. “People are already beginning a process, they’re banding together, they’re working with each other to help recovery.

Houston Jewish Community ‘Could Take Years’ To Recover From Harvey