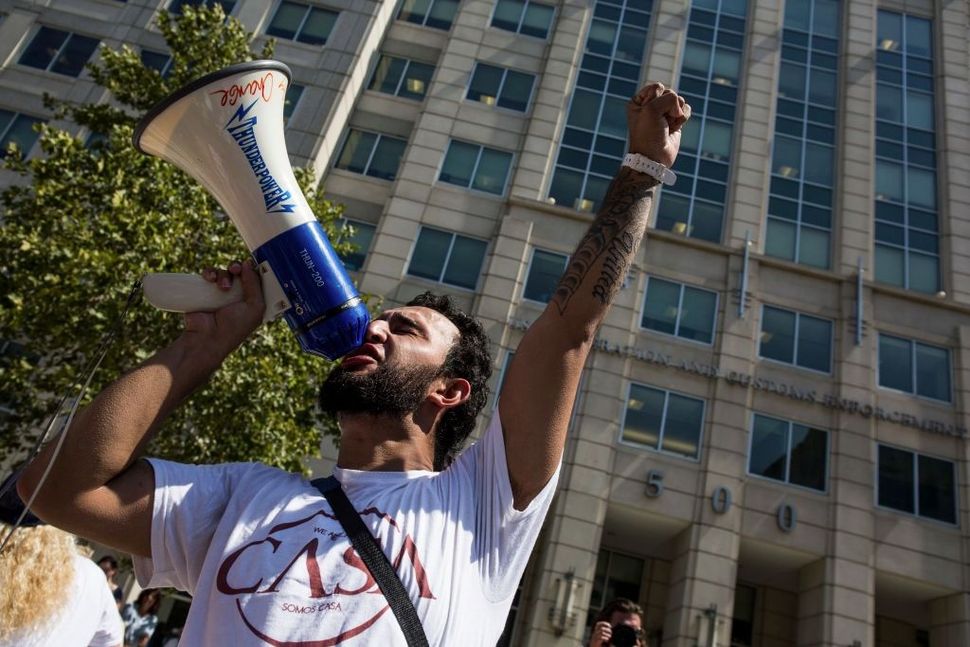 A demonstrator leads a chant outside of the U.S. Immigration and Customs Enforcement building during a demonstration in response to the Trump Administration’s announcement that it would end the Deferred Action for Childhood Arrivals (DACA) program. Image by Getty Images

Jewish organizations and individuals vowed to fight President Trump’s decision to end a program that protects immigrants who came to the United States as children — as did the immigrants that they care and fight for.

“I was crying earlier, it was very scary,” one participant in the Deferred Action for Childhood Arrivals program, who asked not to be named, told the Forward. “I didn’t think this would happen, but I guess I shouldn’t be surprised, because of what’s going on lately. I’m very angry because I think that we got this chance and it’s being taken away from us, for what reason I do not know.”

The DACA recipient came to the United States from the Dominican Republic when she was 4. “We were brought here as children, brought up to feel like Americans. I feel like an American. This is my home,” she said. “I don’t think it’s fair for them to think that way about us when we’re just trying to pay our taxes, find jobs, go to school, make a living and be successful.”

The Jewish Council for Public Affairs, an umbrella organization that represents public advocacy organizations from across the Jewish religious spectrum, had urged the White House to keep the DACA program, which gives around 800,000 young people — so-called Dreamers — limited legal status provided that they fulfill certain requirements, such as not breaking the law. “Ending this protection is inhumane, separating families and would costing our national economy $460 billion over the next decade,” the JCPA wrote in a statement.

HIAS, the Jewish immigration and refugee group, added that Trump “has likely put the American dream out of reach for countless people today, as he continues to reverse course on the American tradition of welcoming immigrants and refugees.”

Other organizations were even more explicit in their condemnations: The left-wing group Bend the Arc claimed that Trump’s “rhetoric about immigrants has been consistently cruel from the beginning. Now, emboldened by the ascendancy of white supremacy in the public sphere, he is escalating into ever more explicit racism.”

The dovish Israel advocacy group J Street made a surprising venture into domestic politics by calling the decision “just the latest in a series of punitive acts designed to cater to the fears and hatreds of an extreme minority of Americans.”

And the organization T’ruah: The Rabbinic Call for Human Rights said that the government was “promoting a white supremacist vision of America.”

The outrage was felt on an individual level, especially for people who are in regular contact with Dreamers. A Jewish professional who employed the DACA recipient as a baby sitter told the Forward that the White House’s decision “reminds me of the persecution of the Jews leading up to World War II.”

This woman found out her employee’s immigration status during the Obama administration. At the time, she said, “I felt joy for her that this [program] existed.” She said that her children “really love her,” and that friends who saw her play with the children in the park would report back “on how engaged and wonderful she was.”

Now, the professional said, the situation is “absolutely unconscionable and I would step in if that’s something that would help.

“If they decided that they were going to deport all DACA recipients, I would open up my house to her and say, ‘Come stay with us until this [blows] over.’”

The Dreamer told the Forward that she hoped it wouldn’t come to that: She is considering marrying her boyfriend, which would solidify her legal status.

In the end, she said, she wanted people to know “that this was a huge chance for us, and I think most of us have used it wisely. And I just hope that in six months, when they say they’re supposed to have an answer for us, it’ll benefit us, because it also benefits them…. I really hope it gets better from here.”