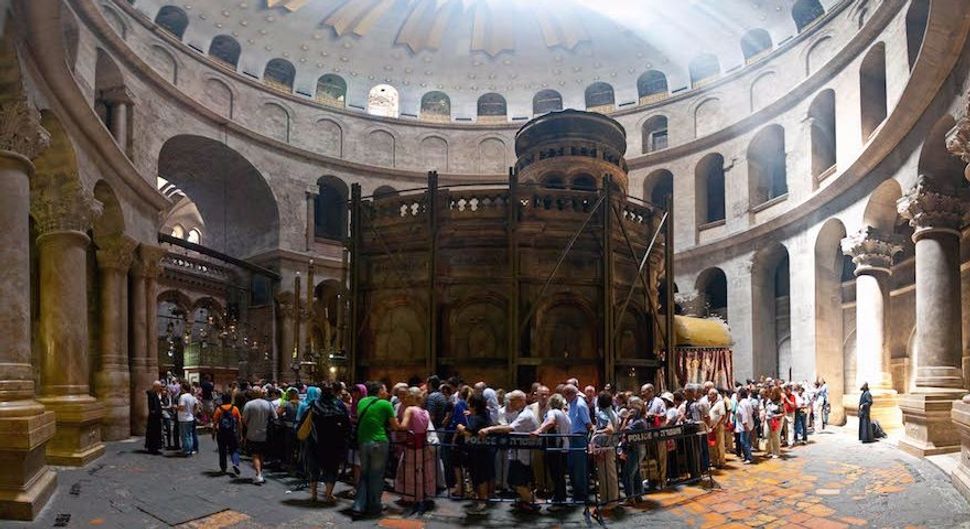 This has been a year of big Israel-related anniversaries. To the Jewish state’s most diehard Christian supporters, the barrage of milestones is not mere coincidence but rather a harbinger of prophecies being fulfilled.

Every half century, many Christian Zionists believe, history makes a concerted push toward its endpoint: the return of the Messiah to Jerusalem. According to this pattern, something momentous should happen to Israel before the end of 2017.

“Reading Israel’s modern history, there seems to be something unusual in 50-year cycles,” said David Parsons, the vice president of the International Christian Embassy in Jerusalem. “It means we should expect something incredible to happen this year to further propel Jerusalem and Israel into its prophetic destiny.”

Christian Zionists, most of whom are part of the world’s 700 million-strong evangelical community, view themselves as the Jews’ partners in God’s plan. Like many Orthodox Jews, they believe that after a world war, the Messiah will take the throne of a Jewish kingdom in Jerusalem and lead the world to peace and prosperity.

As Christians, they of course expect the Messiah to be Jesus, whereas Jews are still looking for their redeemer. But Christian Zionists like to joke, “Let’s bring the Messiah, and then maybe somebody can ask him whether this is his first or second visit.”

When Israel captured eastern Jerusalem and its holy sites from Jordan in the 1967 Six-Day War, some Christians saw proof that the messianic era was nigh. They began scouring history for signs they may have missed.

Many such signs were identified, from “blood moons” to stock market crashes. What most inspired Christian Zionists were the half-century cycles that seemed to lead up to the Six-Day War. The proponents of this theory — including Jonathan Cahn, who discussed it in “The Harbinger,” his best-selling Christian novel from 2012 — tied it to the biblical “jubilee year,” which involves the reversion of land to its original owners.

In 1917, the British defeated the Ottoman Empire and took control of Palestine. On Nov. 2, they issued the Balfour Declaration pledging to support the establishment of a Jewish “national home” in the territory. Zionists eventually drove the British out of Palestine and, in 1948, founded the State of Israel.

A half century earlier, in 1867, two visitors to Ottoman Palestine separately contributed to the narrative that Palestine had gone to pot since the Jews left. British archaeologist Charles Warren conducted the first major excavations of the Temple Mount in the Old City of Jerusalem and found what he thought were relics of the biblical city of King David. And the American writer Twain visited the Holy Land and recorded his observations in a hugely popular travel memoir titled “The Innocents Abroad, or The New Pilgrims’ Progress.”

Twain capped many pages of unflattering observations with this line: “Of all the lands there are for dismal scenery, I think Palestine must be the prince.”

Looking back even further, Christian Zionists singled out 1517, the year the Ottomans conquered Jerusalem. It is also when Martin Luther is said to have posted his protest manifesto against the Catholic Church, launching the Protestant Reformation.

Although Christian Zionists are apologetic about Luther’s anti-Semitism, they believe that by popularizing individual Bible study as the means of relating to God, he made it possible for Christians to see the falsehood of replacement theology. According to this doctrine, which was long a core tenant of the Catholic Church and remains influential, God took the title of the chosen people from the Jews and gave it to the Christians.

Christian Zionists have had decades to speculate about what historic change would happen in 2017, a half century after the Six-Day War. At a conference for Christian Zionists in Jerusalem on Thursday titled “Balfour to Nikki Haley: A Century of Christian Zionist Diplomacy,” a popular guess among the 100 or so evangelical and Jewish participants was that President Donald Trump would fulfill his campaign promise to move the U.S. Embassy to Jerusalem from Tel Aviv. But with a only two months left in the year, time is running out.

Bob O’Dell, an American speaker at the conference and the co-founder of Root Source, a platform that allows Israeli Jews to teach Bible online to Christians, argued that the big event of 2017 may already be happening in the hearts of his fellow evangelicals. He said he has seen a surge interest in the community’s interest in Israel.

“Everyone has a theory, but my view is that what’s happening at this jubilee is a growing realization that Christians are leading the nations in their support of Israel,” he said. “I think this is going to be the most important change of them all.”

Donna Jollay, the director of Christian relations for Israel 365, a fast-growing Jewish-run media company that targets evangelicals with biblically themed news and content, listed dozens of signs that Christians were shepherding Israel toward the messianic era, along with relevant Bible passages.

She pointed to Trump’s Jewish grandchildren, America’s withdrawal from UNESCO over alleged anti-Israel bias (U.S. Ambassador to the U.N. Nikki Haley is a convert to Christianity) and growing Christian investment in the Jewish state. Evangelicals from the United States alone bring about $500 million a year into Israeli tourism and charity, and support its current right-wing government.

“It’s pretty much everything,” she said.

American Jews, especially the majority who are non-Orthodox and politically liberal, have traditionally been wary of evangelical support for Israel. But Josh Reinstein, the founder of the 19-member Christian Allies Caucus, which seeks to promote Christian advocacy on behalf of Israel, said he has also seen a growing willingness among Jews to accept Christian help.

“We’ve seen the results,” he said, citing the anti-BDS laws in the United States and increased cooperation between Israel and African and Asian countries. “We know these are people who stand with Israel based on faith, and they’ll stick around in the long run, regardless of political or economic considerations.”