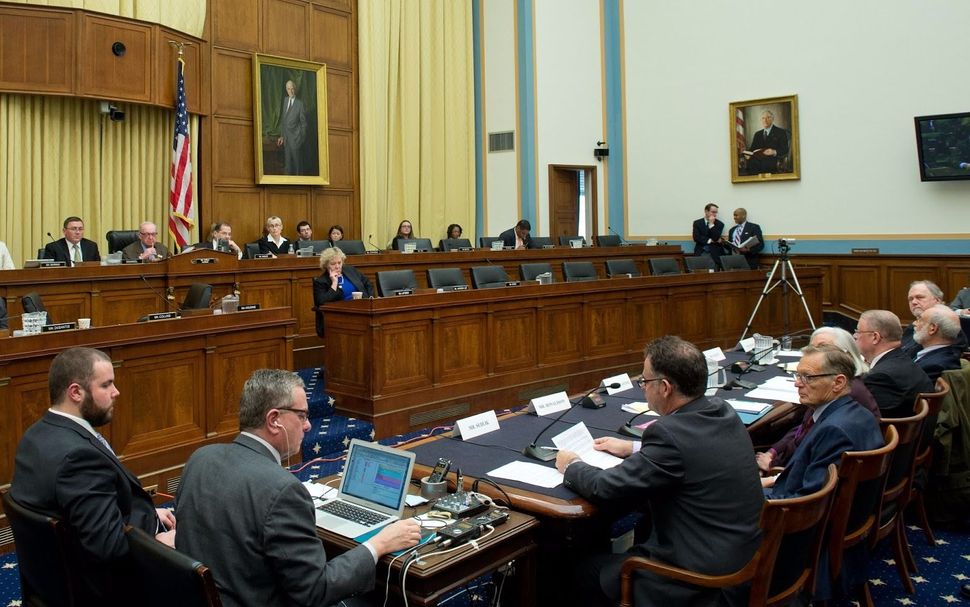 “In fact,” he told House Judiciary Committee members, “comparisons of foreign leaders and countries to Nazism are made regularly.”

The topic at hand during a Tuesday meeting of the congressional committee was legislation that would formally identify such speech as a factor in defining anti-Semitism. And the definition could be used for, among other things, investigating alleged civil rights violations on college campuses.

But Trachtenberg, who has supported an academic boycott of Israel due to its policies toward the Palestinians, reminded the lawmakers that presidents George H.W. Bush and George W. Bush had each compared Iraqi leader Saddam Hussein to Hitler before invading his country. And other countries have also had this comparison thrown at them.

“Creating a ‘special status’ for speech concerning Jews and Israel” when it comes to Nazi comparisons, Trachtenberg said, “would only reaffirm otherwise anti-Semitic claims that Jews are exceptional and therefore need to have a special category of laws that apply only to them.”

That view got a lot of pushback from leaders of three Jewish organizations (and one evangelical Christian organization) who also testified at the Judiciary Committee’s hearing on college campus anti-Semitism. All of them strongly supported the proposed legislation, known as the Anti-Semitism Awareness Act, that would incorporate some types of anti-Israel speech in its definition of anti-Semitism.

But on the same panel sat three Jewish scholars and academics, including Trachtenberg, who staunchly opposed the legislation as a potential threat to free speech and free inquiry, citing their own experiences on college campuses.

The chasm separating the two groups, as reflected in their prepared remarks, marked one of the most striking features of the hearing.

“Enactment of the ASAA will help ensure that [federal] investigations of future complaints… will be informed by a definition of anti-Semitism that includes all current manifestations,” Jonathan Greenblatt, CEO and national director of the Anti-Defamation League, told the lawmakers.

But Susan Nossel, executive director of PEN America, an association of writers, editors and translators devoted to defending free expression, sharply criticized the ASAA. “It is a mistake,” she said, “to adopt a blanket rule that would treat broad categories of criticism of Israel’s government or its policies as anti-Semitism,” as outlined in the act.

The legislation, which died in the last Congress, may now be resurrected — one of the considerations the committee had in holding its hearing. If raised and passed, its language would offer guidance to the U.S. Department of Education when assessing whether a school is harboring anti-Semitism in violation of federal civil rights laws. Under its provisions, the department would “take into consideration” a definition of anti-Semitism developed with the assistance of Jewish communal officials that was later adapted by the U.S. Department of State. Under its terms, criticisms of Israel that may be considered anti-Semitic when “taking into account the overall context” include:

• Using symbols and images associated with classic anti-Semitism to characterize Israel or Israelis.

• Comparing Israel’s contemporary policies to those of the Nazis.

• Denying the Jewish people their right to self-determination, and denying Israel the right to exist.

Criticism of Israel “similar to that leveled against any other country cannot be regarded as anti-Semitic,” the definition adds.

In addition, under the civil rights law itself, mere incidents or episodes of this sort are insufficient for finding a school in violation of the federal statute; the school must harbor a “hostile environment so severe, pervasive, or persistent” that it interferes with some students’ ability to learn and take part in campus activities.

Whether U.S. campuses commonly harbor such environments was itself in sharp dispute among the Jewish panelists. Kenneth Stern, a former official of the American Jewish Committee who helped write an early version of the definition of anti-Semitism for monitoring purposes — but opposes its use as a tool for civil rights enforcement — said, “One campus with anti-Semitism is too many.” Stern, who today is the executive director of the Justus & Karin Rosenberg Foundation, an organization that combats hate and anti-Semitism, described one campus he’d visited, where he found an atmosphere of anti-Semitism so pervasive that some students were afraid to meet with him.

“But that is not the norm,” he stressed, “despite the fact that some outside groups allege that anti-Semitism on campus is an epidemic. “

“Far from it,” Stern said. “There are thousands of campuses in the United States, and in very few is anti-Semitism — or anti-Israel animus — an issue.”

Greenblatt, in contrast, described campuses as increasingly becoming a target for both anti-Semitic right-wing white nationalists and left-wing pro-Palestinian activists who attack Israel in ways that target Jewish students, not just Israeli policies.

Some of the pro-Palestinian groups, he said, “resort to stereotypes against Israel and Jews, irrespective of their views on the state or their perceptive on the Israeli-Palestinian conflict,” creating “an environment… extremely hostile to Jewish students.”

Greenblatt and Abraham Cooper, associate dean of the Simon Wiesenthal Center, recited a litany of examples of such campus anti-Semitic episodes across the country. In some, administration officials had responded strongly, Greenblatt said; in others, they had not.

But Pamela Nadell, president of the Association for Jewish Studies and a professor at American University, stressed the distinction between incidents of anti-Semitism and pervasiveness.

“Are anti-Semites targeting the college campus?” she asked. “Unfortunately, yes. Do Jewish students encounter anti-Semitism on their college campuses? Sadly, yes. Have I on rare occasions in academe heard an anti-Semitic remark? The answer is also yes.”

But she said: “Is anti-Semitism at ‘the epicenter of campus intolerance,’ as one report claims? Has it created a climate of fear that impinges upon Jewish students’ ability to learn and experience college life to the fullest? My impression: an unequivocal no.”

Campuses, Stern stressed, are also “increasingly hostile to the notion that for an education to be valuable, students must have their thinking shaken.

“The move to ‘trigger warnings,’ ‘safe spaces’ and focus on ‘micro-aggressions’ is, in my view, undermining what a campus should be.”

For Cooper, the consequences of having no established definition of anti-Semitism were clear from the Department of Education’s record to date. In the 12 years since the department included Jews as an ethnic group eligible for protection under Title VI of the Civil Rights Act, he noted, its Office of Civil Rights “has not found a single civil rights violation in any claim filed on behalf of Jewish students on college or university campuses.”

“Even when allegations of Jewish student harassment have reached the Title VI threshold,” he said, “officials have failed to understand that the incidents were motivated by anti-Semitism.” Instead, he said, they contend that the perpetrators “were simply motivated by their ‘opposition to the policies of Israel.’”

Cooper intimated that anti-Zionism, by itself, was evidence of anti-Semitism, though many who hold that position, including Jews, claim to be motivated by their objections to privileging Jews in various ways as a group in a state that is more than 21% non-Jewish; many also cite the additional 2.5 million Palestinians under military occupation in the West Bank, which Israel’s current government claims as part of its Zionist vision. Some opponents of this vision instead advocate a binational state as a means of resolving the conflict.

The proposed legislation side-steps the free-speech implications of the government labeling such individuals anti-Semites; it cites denial of Israel’s “right to exist” as just one possible example of anti-Semitic criticism when “taking into account the overall context.” But Cooper praised the legislation because it would, he claimed flatly, identify as anti-Semitic “any expression… that denies Israel’s right to exist as a Jewish state.”

For Stern, the addition of that phrase, and its potential for violating free speech, seemed all but inevitable if such legislation passed. Both Satmar Hasidim and some left-wing Jews have objections to Zionism, he told the lawmakers, for varied theological, ethical or political reasons.

“Satmar Jews… are generally considered part of the Jewish family,” he noted, while many mainstream Jews regard secular anti-Zionist Jews, including those on campus, as “traitors, anti-Semites, self-hating, even ‘kapos.’”

“I am a Zionist, and I don’t know how this internal Jewish debate about who is in and who is out of the ‘family’ should be decided,” Stern said. “I just know that Congress should not be deciding this issue, and effectively declaring that anti-Zionism is anti-Semitism decides the question for the campus. “