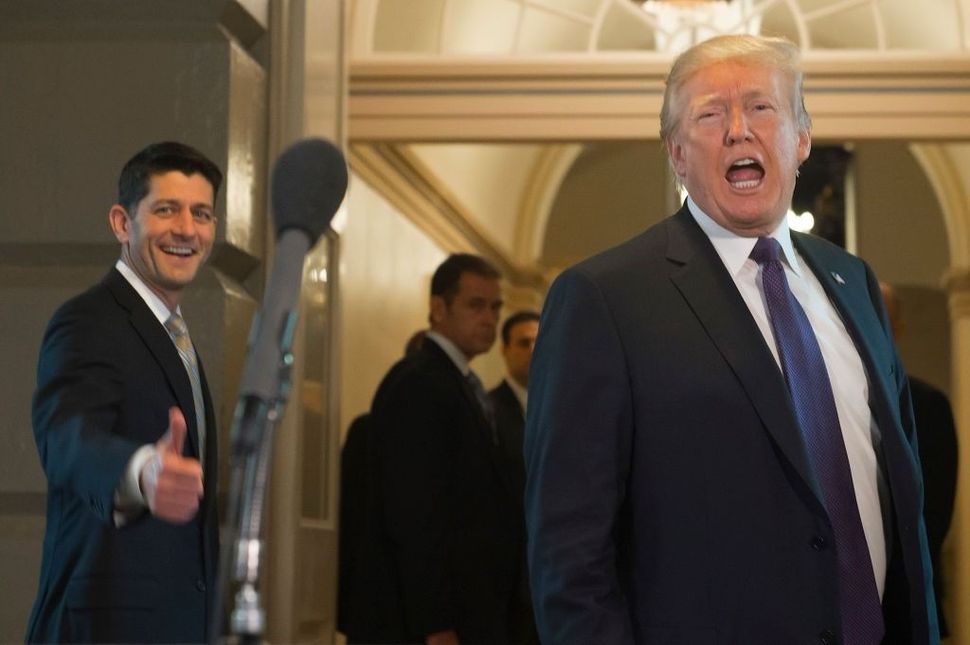 President Donald Trump leaves alongside Speaker of the House Paul Ryan after meeting with the House Republican Conference about tax reform at the US Capitol in Washington, DC, November 16, 2017. Image by SAUL LOEB/AFP/Getty Images

WASHINGTON (JTA) — Most Jewish groups decried a massive tax reform package for what they said were cuts in taxes that would savage entitlements, although some groups celebrated discrete victories in portions of the massive bill.

The Republican-led Senate and U.S. House of Representatives passed the bill this week, and President Donald Trump, who hungered for a legislative victory in his first year in office, has promised to sign it before the weekend is out.

The bill, which goes into effect for 2018 tax filings, institutes some moderate cuts for individual filers and slashes the corporate tax rate from 35 percent to 21 percent, which Republicans say will spur business. It purports to simplify tax filing by replacing deductions with tax cuts. One nonpartisan analysis predicts it will increase deficits by $1.4 trillion over the next decade.

The Reform movement, in a statement before the Senate vote on Tuesday, said the law “will impose a massive addition to the debt and threaten effective anti-poverty programs, including Medicaid and SNAP.” Medicaid subsidizes health care for the poor, and SNAP, formerly known as food stamps, provides nutritional assistance to the poor.

B’nai B’rith International, which runs a network of homes for the elderly, decried the risks it said the tax bill posed to Medicaid as well as to Medicare, which subsidizes health care for Americans 65 and older.

“B’nai B’rith International is deeply disappointed that Congress has passed a tax reform plan that does not consider the negative long-term consequences to Medicare and Medicaid — the social safety net programs that are a hallmark of this nation’s commitment to those in need,” it said.

The National Council of Jewish Women also reserved its most pointed attack for the reform package’s potential to slice funding for Medicare, Medicaid and Social Security.

“Perhaps most egregious, the cuts to revenues endanger programs such as Medicare, Medicaid, and Social Security by triggering rules that would force Congress to make up for shortfalls in those programs by slashing benefits, since revenue increases would be off the table when the tax bill becomes law,” the group’s CEO, Nancy Kaufman, said in a statement.

The Reform movement and B’nai B’rith also decried the removal of a tax penalty for those who fail to buy health insurance, which had been a feature of the Affordable Care Act, the signature law passed by Trump’s predecessor, President Barack Obama.

“Last year 3.3 million people between the ages of 55 and 64 received insurance through the Affordable Care Act marketplace,” B’nai B’rith said. “Repealing the individual mandate, according to the Congressional Budget Office, will cause premiums to increase by 10 percent.”

Charities also fear that the new tax code will discourage charitable giving by doubling the “standard deduction,” which does not require itemization from $6,350 to $12,000 for individuals and $12,700 to $24,000 for married couples.

“These provisions will greatly decrease the number of taxpayers that itemize (and thus benefit from a tax deduction for charitable giving) as well as ‘increase the cost of giving’ for those who continue to itemize,” the Jewish Federations of North America said in an analysis.

Groups pointed to some wins wrapped into the reforms — although in many cases, the victories involved the preservation of long-existing provisions that Republicans had at various points sought to remove.

The bill preserves deductions for medical expenses for at least two years. There had been talk of removing them, and JFNA and B’nai B’rith said the elderly especially would be adversely affected. Also preserved was the Low Income Housing Tax Credit, which B’nai B’rith says is an incentive to build affordable housing for the elderly.

Orthodox groups, usually to the right of other Jewish groups on domestic issues, found reasons to praise and criticize the legislation.

The Orthodox Union and Agudath Israel of America praised the preservation of “qualified tuition reductions.” Intended primarily for graduate students whose university employment is paid in part by tuition write-offs, the measure exempts taxes on the tuition. Religious schools use the reduction to subsidize tuition for the children of staff and are thus able to attract quality teachers. There had been proposals to end the exemption.

“Many nonpublic schools – including the Jewish community’s day schools – utilize QTRs as an essential element to recruit and retain teachers to work in their schools by offering tuition discounts for the teachers’ children to attend the school,” Nathan Diament, the O.U.’s Washington director, said in a statement.

Orthodox groups also welcomed one new measure allowing parents to use a portion of tax-exempt savings for tuition, or 529 plans, to subsidize education in K-12 private schools.

Agudath Israel of America decried the removal of personal exemptions — $4,050 per tax filer and each of her dependents — and reductions in deductions for state and local taxes.

“As a high percentage of Orthodox Jews have large families, and reside in areas that are highly taxed, these changes will likely have a dramatically negative effect on large numbers of our community,” said Agudah, an umbrella body for haredi Orthodox Jewish groups.

Groups across the Jewish spectrum also breathed a sigh of relief at the preservation of the so-called Johnson amendment, a decades-old ban on tax exemptions for houses of worship that are directly involved in electioneering. Trump has campaigned to kill it, but the provision that would do so was removed at the last minute on a technicality.

Although some synagogues may have welcomed the opportunity to endorse candidates, most organizations believe the amendment draws an appropriate line between church and state and relieves local clergy of the pressure to take divisive political stands.