This Jewish Woman Is Creating The World’s First Vagina Museum 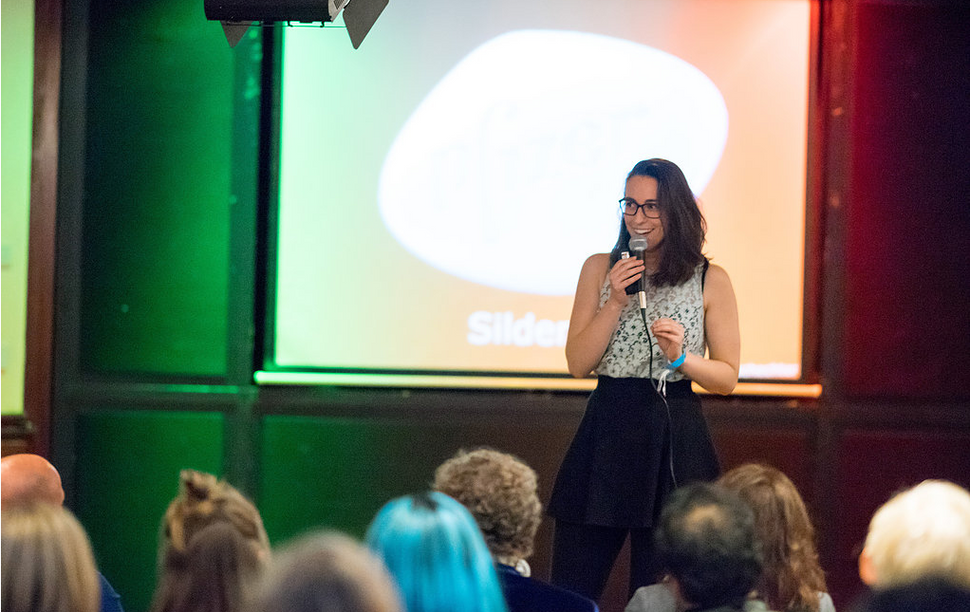 BIRMINGHAM, England (JTA) — Nine months after announcing that she is creating the world’s first vagina museum, Florence Schechter is confident that she has heard every joke on the subject.

Schechter, a Jewish comedian and communications professional in her 20s, is preparing to open the museum in Brighton, 50 miles south of London. When the news broke in the spring, it caught the attention of Conan O’Brien, who quipped: It will be “the first museum where you enter through the gift shop.”

The idea also blew up on social media. Twitter users advised Schechter to put up a sign saying “caution, slippery when wet” or install a knocker on the door because “no man will find the buzzer.”

Even her father, the Russia-born klezmer musician Gregori Schechter, got in on the act: He complimented her on “hitting the G-spot” after The Independent profiled her efforts in March, she proudly told JTA.

But Schechter, who is currently recruiting trustees and scouting a location for the museum, is dead serious about her plan, she told the 30 or so people who came to see her talk about it on Wednesday at the Limmud Festival of Jewish learning in Birmingham. Schechter said she started working on the museum after learning, in March, that Iceland has the world’s only penis museum. She calls this a case of “inequality.”

The denigrating jokes she’s heard since announcing her plan in March have only strengthened her resolve. “They’re funny until you realize the point is that vaginas are bad, which is pretty horrible,” she said.

“The world absolutely needs a vagina museum,” she added.

For now, though, the museum is little more than idea that is being promoted, albeit with considerable success. There is a web site through which UK residents can purchase buttons sporting the museum’s logo, and Schechter has been busy hosting events and giving talks. But she admits she is nowhere near collecting the necessary funds for opening a physical space, and doesn’t imagine opening one before 2020.

When asked where she would find the funding, Schechter replied: “Oh, man, I wish I knew.”

She quickly corrected herself — “Oh, woman, I wish I knew” — before settling on “person.”

For now, though, she’s thinking big. In the museum, Schechter plans to explore various perceived inequalities that are connected to vaginas. First among those themes is female genital mutilation, or FGM — a custom prevalent in some Muslim communities, which has affected 200 million women, according to the United Nations.

“I want the museum to be part of fighting that,” said Schechter.

She also noted that sex trafficking, sexual assault, gay rights and shaming campaigns online could be part of the museum.

“I want people to come in, see these issues and say, ‘I have to do something, I’ve got to change this,’” she said.

Instead of looking to open the museum in the U.K.’s capital, Schechter has her sights on Brighton, a seaside town about 50 miles south of London. It’s a “very progressive place,” she noted. (In the June general elections, the local parliamentary candidate for the Green Party won slightly more than half the 57,687 votes cast at Brighton. Nationwide, the party won 1.6 percent of the vote.)

“People think that London is quite progressive, but because it’s so multicultural, that means that there are certain communities that can really take offense at a Vagina Museum, and I don’t want to, like, offend anyone when we’re in the really early stages,” she said.

“These girls put themselves at risk without realizing it,” she aid. “Those are just the facts and we will make them known for them to make a decision.”

The museum will also promote gay rights, said Schechter, who added that if she were living in one of the world’s 12 countries with death penalties for gay people, “I too would have been sentenced to death.”

Other exhibits at the museum are less controversial. Anatomical charts will be on display, to help fight widespread ignorance about the female reproductive organ. (In a 2014 survey in the United Kingdom, half of 1,000 women aged 26-35 couldn’t point out the vagina on a medical drawing of the reproductive system. Half of 2,000 men couldn’t find it either in a 2017 follow-up survey.) Other sections will be devoted to childbirth and contraception.

There will be touches of whimsy as well. For example, the café will feature vulva cupcakes — or cleft pastries with pink cream in the groove. An art section will feature a sculpture made from plaster casts of 400 women’s vulvas (it’s a 2008 installation titled “The Great Wall of Vagina” and its aim is to start a debate on labial beauty standards dominated by the pornographic industry) and Georgia O’Keeffe’s 1926 “Black Iris” painting.

O’Keeffe had consistently denied that her series of flower paintings, with deep and dark crevices, were in fact subversive vaginal artworks.

“I would love to have been there in the room when she denied this,” Schechter said during her Limmud talk. “Do you think she was winking?”

This Jewish Woman Is Creating The World’s First Vagina Museum