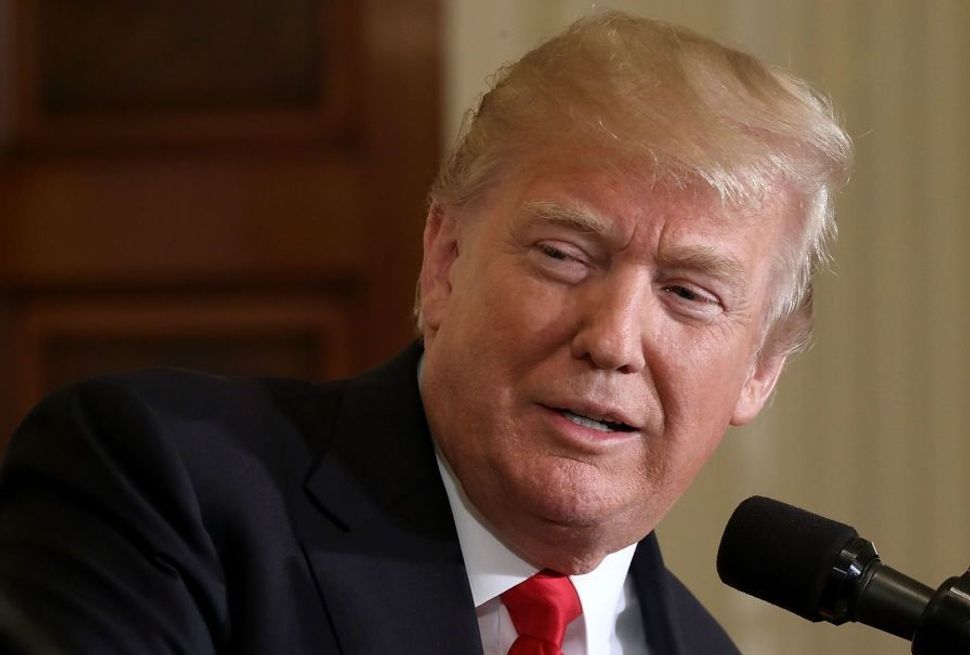 So read a report submitted to the House Committee on Immigration in 1924, written by the director of the United Stated Consular Service and approved by the secretary of state. That year, Congress passed a bill that drastically slashed immigration from Eastern and Southern Europe, responding to xenophobic feelings across the country.

The bill didn’t mention Jews, but they were affected. In 1921, according to JTA at the time, 120,000 Jews came to America. After the law was passed, that number fell to around 10,000. The headline on that article was blunt: “America shuts her doors to immigration.”

The nativist rhetoric of a century ago found new expression in the reported words of President Donald Trump at a recent meeting of lawmakers, where attendees said he questioned why the United States should allow people from “shithole countries,” including those in Africa, to immigrate. He suggested the U.S. should admit more people from places like Norway.

Trump tweeted a vague denial of the statement, but it’s been asserted by multiple people at the meeting, including Illinois Sen. Dick Durbin.

While congressmen in the 1920s may not have used Trump’s language, they were also opposed to letting in people from so-called undesirable countries — like Italians, Slavs and Jews from Eastern Europe. Chinese immigrants were banned altogether. Senator David Reed, for whom the 1924 law was named, also wanted to let in more immigrants from “Nordic” countries.

An amendment to the 1924 law that aimed to restrict immigration even further was “aimed chiefly at the Jews who, [a senator] asserted, have been emigrating to American in disproportionately large numbers.” Disproportionate Jewish immigration from Russia, the senator told JTA, was “unfair to the predominating population of those countries.”

The senator denied being anti-Semitic. His amendment failed. Reforms in the 1950s and 1960s did away with the quotas.

This prejudice had been around for decades before the 1924 law. A report from 1891 prepared by Sen. Henry Cabot Lodge lumped Jews, Italians, Poles and others into “races most alien to the body of the American people.”

Jews at the time, Sarna said, would be quick to admit they came from difficult conditions that they were happy to escape. Emma Lazarus’ poem on the Statue of Liberty, “The New Colossus,” called some immigrants “wretched refuse.” The difference, Sarna said, is that the poem, and Jews, saw those difficult conditions as a reason to let immigrants into the country, not to refuse them.

“For many Jews and for a great many Americans, when they think about their own roots, they came from places people would not describe particularly kindly,” he said. “They looked at America as a refuge from those places — the land of the free and the brave where they had great opportunities and achieved wonderful things.”

But it bears noting that Jews were just a small portion of the immigrants who faced this bigotry after World War I, said Hasia Diner, director of the Goldstein-Goren Center for American Jewish History at New York University. Southern Italians, who were considered boors impossible to educate, had it far worse, she said.

“The view was they could not fit into the American orientation toward progress and doing better, and would be forever manual laborers stuck at the very bottom,” Diner said of attitudes toward Southern Italians. She said Jews, by contrast, were viewed as “a little too successful, a little too pushy, getting on that American track too fast. They were viewed as competitors.”

Sarna and Diner both said that similar fears animated the nativisms of the 1920s and today. In both cases, they said, these derogatory comments were based in a fear of the other from a foreign culture, who will disrupt white American society.

“There was a fear that these immigrants would change the country, which in fact they did, making it less Protestant, less Central European and Nordic and so on,” Sarna said. “Today it’s the same. Lo and behold, the president wants more immigration from Norway, so in that sense, from a historical perspective, nothing’s changed.”

Salty language aside, some have suggested that the president’s comments can be understood as a blunt way of talking about a recurrent debate in American society: Does the United States accept immigrants as part of its duty to extend freedom and opportunity to those struggling around the world, or should its first consideration be what’s best for the United States? Other countries — including Australia, Canada, Great Britain and New Zealand — use a points system to favor immigrants with more education and experience, for example.

Sarna rejected the idea that Trump was simply expressing a preference for highly skilled immigrants, saying that if that’s what he meant, he would have said that.