Billy Graham, Who Championed Israel But Derided Jews In Private, Dies At 99 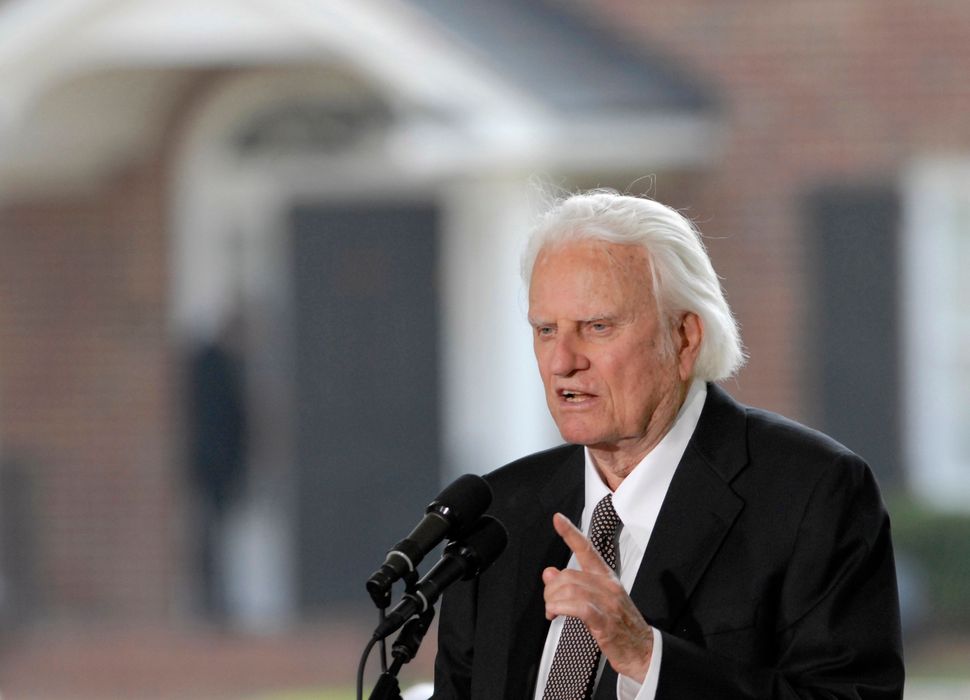 WASHINGTON (JTA) — Billy Graham, the giant of American evangelism who was exalted by Jews for his championing of Israel at its hour of need and then condemned when a nasty anti-Semitic streak was revealed, has died.

Graham, 99, died at his home in Montreat, North Carolina, media reported. He was a counselor to presidents Democratic and Republican and, with his massive arena appearances, was a precursor of the Protestant televangelism that helped reshape the American religious and political landscapes. His son, Franklin, is one of President Donald Trump’s highest-profile religious supporters.

The elder Graham was an early and avid backer of Israel. A tour of the country in 1960 raised the country’s profile among American evangelicals, establishing the seeds of strong pro-Israel support that persist in that community until now . In 1967, he urged Israeli leaders not to yield to diplomatic pressures that could endanger the country’s security; such entreaties, commonplace now on the American right, were unusual then. He made a film, “His Land,” about Israel that continues to be screened among pro-Israel evangelicals.

Graham also was a champion for the Jews persecuted in the former Soviet Union and counseled his evangelical brethren not to proselytize Jews.

“Just as Judaism frowns on proselytizing that is coercive, or that seeks to commit men against their will, so do I,” Graham told an American Jewish Committee delegation that met with him in 1973.

He received awards from the organized Jewish community and was so beloved in its precincts that in 1994, when H. R. Haldeman, a former top aide to President Richard Nixon, revealed Graham’s lacerating anti-Semitism expressed in private talks with Nixon, the Jewish community dismissed Haldeman’s account out of hand.

Tapes from the Nixon library released in 2002 validated Haldeman’s account. “A lot of Jews are great friends of mine,” Graham told Nixon in 1972. “They swarm around me and are friendly to me. Because they know that I am friendly to Israel and so forth. But they don’t know how I really feel about what they’re doing to this country, and I have no power and no way to handle them.”

Graham also said that the Jewish “stranglehold” on the media “has got to be broken or this country’s going down the drain.”

Graham in 2002 apologized for the remarks, and Jewish community leaders accepted his apology — but the relationship would never again be the same.

“We knew that Nixon was an anti-Semite,” Abraham Foxman, then the Anti-Defamation League’s national director, told JTA at the time, whereas Graham is “a guy we all felt comfortable with … And he was so infected with this virulent anti-Semitism.”

“Billy Graham later regretted his highly negative remarks about Jews and Judaism,” Rabbi A. James Rudin, AJC’s senior interreligious adviser, said in a statement Wednesday. “He publicly apologized for them and asked for forgiveness during his 2002 ‘Crusade’ in New York City. I had a private conversation with him at that time, where he expressed deep personal remorse and asked me to convey his sincere apologies to the entire Jewish community.”

Billy Graham, Who Championed Israel But Derided Jews In Private, Dies At 99