He Survived The Parkland Shooting. Now He Advocates For Gun Reform. 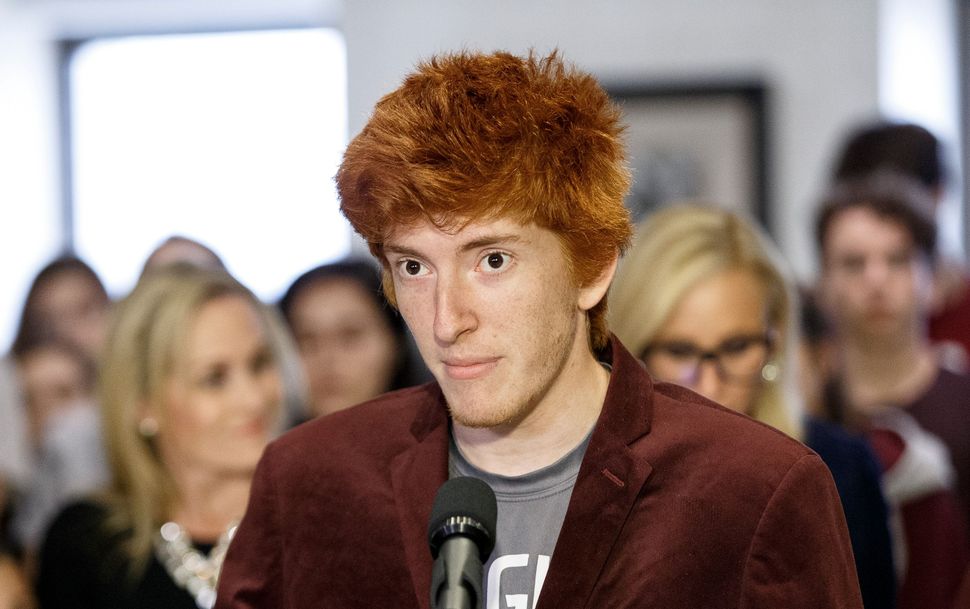 (JTA) — Throughout his senior year in high school, Ryan Deitsch has stayed busy. A month ago, the 18-year-old filled his time outside of classes performing in an doing improvisational theater group he started at his school, producing TV content for the school’s newsroom and working as a busboy at a local restaurant.

Now he fills his schedule talking to lawmakers and organizations, doing interviews with media outlets and visiting other high schools to organize people who want to get politically involved.

Deitsch is a student at Marjory Stoneman Douglas High School in Parkland, Florida, and was inside when a former student stalked its halls with an AR-15-style rifle, killing 17 students and staff members. Deitsch hid with other students in a closet during the massacre.

As police came to evacuate the school, Deitsch’s journalistic instincts kicked in and he filmed what was happening on his phone, sharing it on Twitter. The footage showed students being marched through the halls, their hands raised over their heads at the request of the police, and then running as they neared the exit.

Being at school during the shooting “was awful,” he told JTA in a phone interview on Tuesday.

“It was definitely a trapped situation. I did not feel so much in the moment, but definitely in reflecting you can feel a lot of things.”

Now Deitsch is among a handful of students leading the Never Again movement, which seeks to prevent future school shootings, advocates for gun reform and is organizing the March for Our Lives in Washington, D.C., later this month. As part of Never Again, Deitsch does community outreach. He calls himself “part of the B-team,” and says he’s the go-to person when organizers Emma Gonzalez, David Hogg or Cameron Kasky are out of town.

Deitsch says knowing that his classmates and teachers were killed is what keeps him going. Among the victims was Carmen Schentrup, 16, whom he knew through the school’s a cappella group.

“The clearest motivation is that 17 individuals lost their lives and they shouldn’t have,” he said. “It was a very preventable death, and we are here to make sure none of this has to happen again.”

Deitsch wakes up each day at 5 or 6 a.m. and doesn’t go to bed until around 3 the next morning. In addition to attending school, he organizes trips and speaking engagements for the Never Again team and answers social media messages. Sometimes he misses classes to speak about his experience at events across the country. He also tries to squeeze in things he did before the shooting, like spending time with his girlfriend, friends and family.

“That’s still important, I can’t just not have my own life,” he said.

Last month, his comments to Sen. Marco Rubio, R-Fla., at a CNN town hall received wide media coverage. Deitsch asked Rubio, “Why do we have to march on Washington, just to save innocent lives?”

His siblings are also involved in the movement. Matt, 20, met with Sen. Bernie Sanders, I-Vt., to discuss policy change, and Samantha, 15, penned a poem about her experience at the school that went viral on social media.

Deitsch tries to balance his newfound passion with attending school and mourning the lives of those who died in the shooting.

“I try to attend school as much as I can,” he said.

About a week ago, he and other Never Again organizers spent five hours at the makeshift memorial for the shooting to grieve.

Prior to the tragedy, Deitsch dreamed of becoming a filmmaker or journalist. But the way the media covered the event, including filming him and his classmates crying at funerals, has left him “sick to my stomach.”

Though the shooting propelled him to become politically involved, Deitsch isn’t sure if he wants to pursue political activism in the long term. He plans to attend college in the fall; he’s still waiting to hear from schools before making his decision.

Judaism has taught Deitsch, whose family belongs to Congregation Kol Tikvah in Parkland, to ask questions — a quality he said that helps him in his activism.

“I feel that Judaism has really supported my need to just be that one guy in the room to just be like, ‘Hey, this is wrong, why is it this way?,’ and if they don’t have a good enough answer for why, we’ve got to change it,” he said.

But Deitsch has found it difficult to attend services at his synagogue following the shooting. The Guttenberg family, whose daughter Jamie was killed in the shooting, are members of the Reform congregation.

“I cannot stay in any place that has had a funeral for somebody I know for too long, so right now that synagogue seems like a place of death,” he said.

In addition to organizing for Never Again, Deitsch said he will use his vote to make his point.

“I’m gonna vote out anybody who has just been so heartless during this entire debacle,” he said.

Deitsch said he feels obligated to continue his work.

“The point is that we have to do this,” he said.

He Survived The Parkland Shooting. Now He Advocates For Gun Reform.