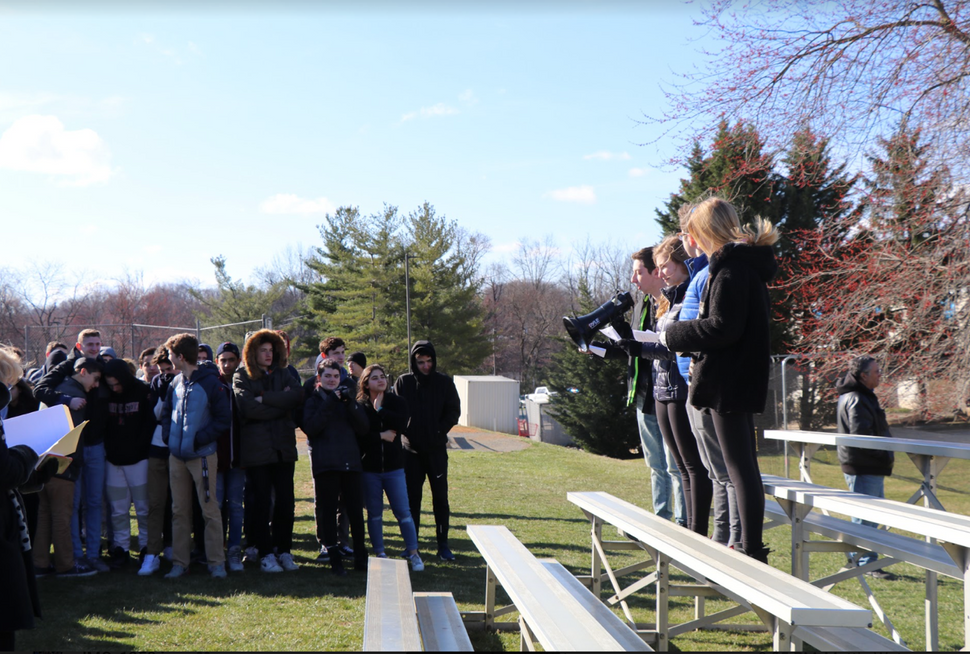 Charles E. Smith Jewish Day School in Rockville, MD students “walkout” of school to protest gun violence on Wednesday. The school administration originally said there would be consequences for doing so. Image by Mattie Watson

Students at Jewish schools across the country participated in Wednesday’s national school walkout against gun violence — but for students at the nation’s largest Jewish school, the effort to join started weeks before, when they realized they had to persuade the administration that it was the right thing to do.

Students at the Charles E. Smith Jewish Day School in suburban Washington, D.C., spent weeks trying to convince the school administration not to penalize students who walked out of class. After continued complaints from students and alumni, the school changed its policy and allowed a 17-minute demonstration on the school field.

“Over the past couple of weeks, I have been adamant about overturning the school’s decision to stay away from anything political,” event organizer Reilly Lowell, a junior, told the Forward. “Today, I finally had the opportunity to speak to my school community about the need to rid guns and that our congressmen have failed to figure out a way to solve the current injustice.”

Many Jewish schools supported and even helped facilitate their students’ decision to walk out. At Golda Och Academy, in New Jersey, students lit yarhzeit candles for each of the victims and talked about their lives, with each student being picked for their shared characteristics with the victim. At Pennsylvania’s Kohelet Yeshiva, students had the option to walk out, call legislators or write letters to students and families in Parkland, Floria.

“I want you to know I’m proud of you today, crazy proud, because you’re doing something my generation rarely did: taking coordinated, purposeful action about a real problem,” Gary Weisserman, head of school of Milken Community Schools in Los Angeles, told students. “It reminds me that some good can come from even the greatest tragedies.”

At Charles E. Smith, students read the names of the victims who died in the shooting at Parkland’s Marjory Stoneman Douglas High School one month prior. Two students gave speeches on a megaphone advocating for new legislation, and attendees received a round of cards outlining how to do political “next steps,” like contacting members of Congress.

But the event nearly didn’t happen. After the Stoneman Douglas shooting, which killed 17, the CESJDS administration planned a schoolwide assembly to commemorate the young lives lost. Gun control was not to be mentioned.

This wasn’t sufficient for some students, like junior Ilan Cohen, who was just elected to a leadership position in his Jewish youth movement — and is a nominal candidate for the governorship of Kansas. He discovered that the state has no geographical or age requirements and decided to run so that he could encourage teens to participate in politics. He and Lowell organized a scheduled walkout to take place February 22, but at the beginning of the school day, according to the student newspaper, The Lion’s Tale, high school principal Marc Linder told students via the loudspeaker that they would receive consequences for an unsanctioned walkout.

Linder did not clarify what these consequences would be. The school handbook says that students can receive as much as a 1% grade reduction for each class missed.

“As a pluralistic school, we did not think it was right to take a political stand,” the head of the school, Rabbi Mitch Malkus, told the Forward. “There was a belief that our school needs to maintain neutrality.”

Lowell, Cohen and other students canceled their plans for that day but kept fighting.

“We understand why it is difficult for the administration to put their name behind the event, and in some ways, we are not even asking them to,” Cohen told The Lion’s Tale in response to the cancellation. “We are asking for them to allow it to happen, and there is a big difference between allowing it to happen and supporting it. In an ideal world, the school would be putting their name behind the event; we don’t expect that.”

Yonah Lieberman, a 2009 graduate who now works as an organizer for the anti-occupation group IfNotNow, sent an email to the school, criticizing its original decision. He says he never heard back.

“I was outraged that the school administration would attempt to make it more difficult for students to have their opinions heard. But I wasn’t surprised… A majority of Jewish institutions — day schools, summer camps, synagogues — talk about how important young people are and say that they really value young people’s opinions. But when it comes down to it, it’s extremely clear that they listen to their donors over their students.”

Lieberman added that the issue of stifling student activism is most prominent when it comes to pro-Palestinian issues, leading Jewish groups to have a “reflexive reaction” to political advocacy.

Ironically, Lieberman said, the school itself encourages students to be activists. “They talk about tikkun olam [repairing the world]; we had volunteering days,” he noted. “When I was at school, they encouraged a Students for Obama club. It’s clear that they encourage student activism only when it’s not going to rock their own boat. Once it starts to hit close to home, that’s when it’s like, ‘We’ve got to clamp down on this.’”

Following continued rallying from students, and attention from the local Jewish media, the administration decided to re-evaluate their decision. On March 8, the CESJDS administration announced in an email to parents that they would allow students to hold a walkout in response to the Florida shooting, in conjunction with a national campaign scheduled to take place March 14, the one-month anniversary of the shooting. The announcement came a day after Malkus signed a letter along with more than 130 Jewish heads of school calling for gun control legislation.

Malkus told the Forward that his change of mind was a personal one, not necessarily representative of the school as a whole. “I have a fundamental educational principal that school empowers students to have discussions around issues of the day,” he said. “I want to empower students, but not tell them what to think. If I hadn’t signed this letter and allowed this walkout to happen, then that would make me complicit if there were ever an attack on our school.”

With permission granted, and security measures put into place by the administration (such as not publicizing the event in advance), Lowell and Cohen continued planning the demonstration, which took place at the same time as other students around the country also walked out. Jewish schools of all denominations participated, ranging from the nondenominational schools in San Francisco and Pittsburgh, and Conservative day schools in Westchester and Long Island, New York, to Modern Orthodox yeshivahs in Chicago and Philadelphia.

“It was really an incredible sense of togetherness that all these people I’ve talked to about other issues where we might not agree, or just people that I don’t know very well, we all came together and stood together for this issue that we all feel so passionately about,” Sophia Shapiro, a 10th-grader who organized the walkout at Jack M. Barrack Hebrew Academy, in Pennsylvania, told JTA.

SAR, a Modern Orthodox school in the Bronx, did not hold an event Wednesday because of the organized walkout’s ties to the Women’s March, whose leaders have been criticized for their ties to the anti-Semitic preacher Louis Farrakhan. The school plans to hold a separate event Monday. Nonetheless, around 30 students walked out at the original time anyway.

“I do not support gun control, but that is not the point,” she said. “School, especially a private school, is not the place for students to take a political stance. They should exercise their First Amendment right on their own time, not when parents are paying for them to be in class.”

Cohen said that he and Lowell celebrated only briefly their victory of changing the administrations’ decision. He feels that much work still needs to be done before significant change can be praised.

“It was through activism that we were able to make this change, and I’m not done pushing for legislation that will make the schools safer. This starts at JDS, but it’s not just about our community. This is a national movement.”

Lowell added that she hoped her peers took away the lesson that “teenagers can be a vehicle of change.”