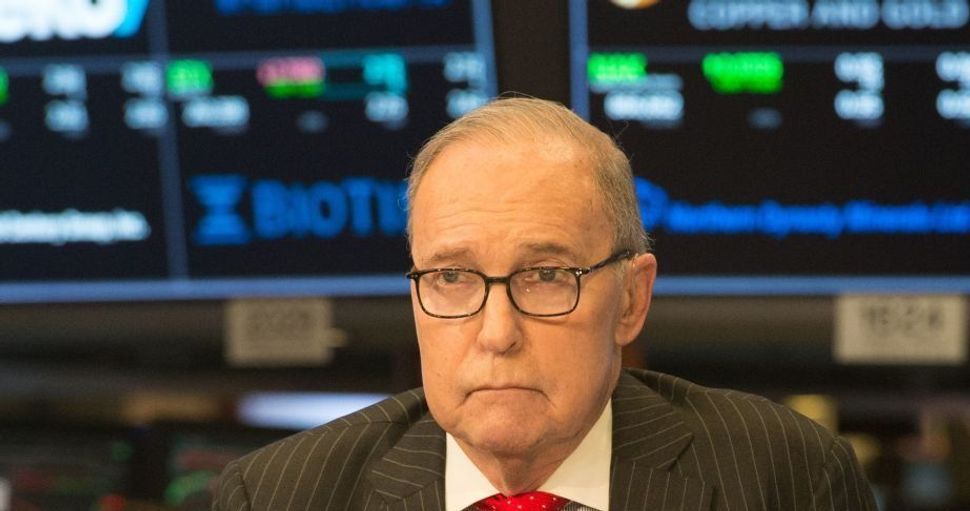 (JTA) — President Donald Trump on Wednesday named Larry Kudlow, the CNBC personality, as his next chief economic adviser. Here are five things to know about Kudlow.

He was born Jewish but converted to Roman Catholicism.

Not just Catholicism, but its deeply conservative stream: The priest who converted Kudlow belongs to the Opus Dei, the secretive traditionalist wing of the church, and Kudlow attended Opus Dei retreats as part of his conversion.

In a 2000 interview with Crisis, a conservative Catholic publication, Kudlow said the traditions are part of what attracted him to the church.

“All the Catholic priests who worked with me are all very traditional people. I welcome that,” he said.

“One of the things that attracted me to it is that I really like the traditions, the formality of it. It seems to me that in the early days, the Church had a lot of rituals, and I like that. That appealed to me enormously,” he said.

Kudlow said a personal addiction crisis in the early to mid-1990s led him to the church.

“In my 12-step meetings, I sometimes hear some of the younger kids who went to Catholic school rebel against Catholicism,” he said. “I say to them, ‘You don’t know how wonderful those rules are.’”

Not a lot stuck from his Jewish upbringing in Englewood, New Jersey.

He talks Jewish when it comes to Israel.

Kudlow, 70, remains committed to Israel, and uses Jewishisms to describe his devotion. In 2006, writing for the conservative National Review, where he was economics editor (he liked the magazine’s Catholic ambiance, he once said), Kudlow praised Israel as a model in combating terrorism.

“God bless Eretz Israel,” he quoted Jewish conservative Ben Stein as saying. And he concluded: “Sensible freedom-loving people everywhere will realize that Israel’s furious response in the face of senseless terrorist attacks will have made the world a better place.

Kudlow was an early believer in the Trump candidacy, something Trump’s Jewish daughter, Ivanka, noted on Twitter the day after her father announced Kudlow’s appointment on the same platform.

“Your advice was instrumental on the campaign & later during tax reform,” she said. “Now, we welcome you to the White House! You will undoubtedly help POTUS grow the economy and create jobs & opportunity for all Americans!” (POTUS is shorthand for president of the United States.)

Congratulations @larry_kudlow on being named Chief Economic Advisor. Your advice was instrumental on the campaign & later during tax reform. Now, we welcome you to the White House! You will undoubtedly help POTUS grow the economy and create jobs & opportunity for all Americans!

Kudlow, however, does not agree with Trump on tariffs.

Oddly, the most pronounced disagreement between Kudlow and Trump — on whether the United States should impose tariffs as a means of extracting better trade deals — is what drove Gary Cohn, Kudlow’s predecessor, away from the White House.

Cohn’s opposition to tariffs is what led Trump to tease (or bully, depending on your perspective) him after Cohn announced his departure. Trump called Cohn a “globalist,” but said he liked him in spite of that.

His predictions are, um, iffy.

Liberal columnists have delighted in Kudlow’s appointment, if only because it gives them the excuse to play a favorite Washington parlor game: Count how many times Kudlow has been wrong.

“Larry Kudlow may have been more wrong about the economy than anyone alive,” The Washington Post’s Dana Milbank wrote Thursday, running through Kudlow’s assurances, in the mid-to-late 2000s, that the housing bubble was not a bubble and that the stock market was solid and that a recession was definitely not on the way.

“Trump’s New Economic Adviser Lawrence Kudlow Has Been Wrong About Everything for Decades,” said Jonathan Chait at New York magazine.

His reverence for Israel colored one prediction that he got wrong. In a pair of National Review columns, he was feeling bullish after Israel handed “a significant defeat” over the “thuggish and cowardly Hezbollah murderers” in Lebanon as well as “their totalitarian backers in Syria and Iran,” thus striking a blow for “economic freedom both inside and outside the U.S.” That thinking led him to conclude that there “will be no recession.”