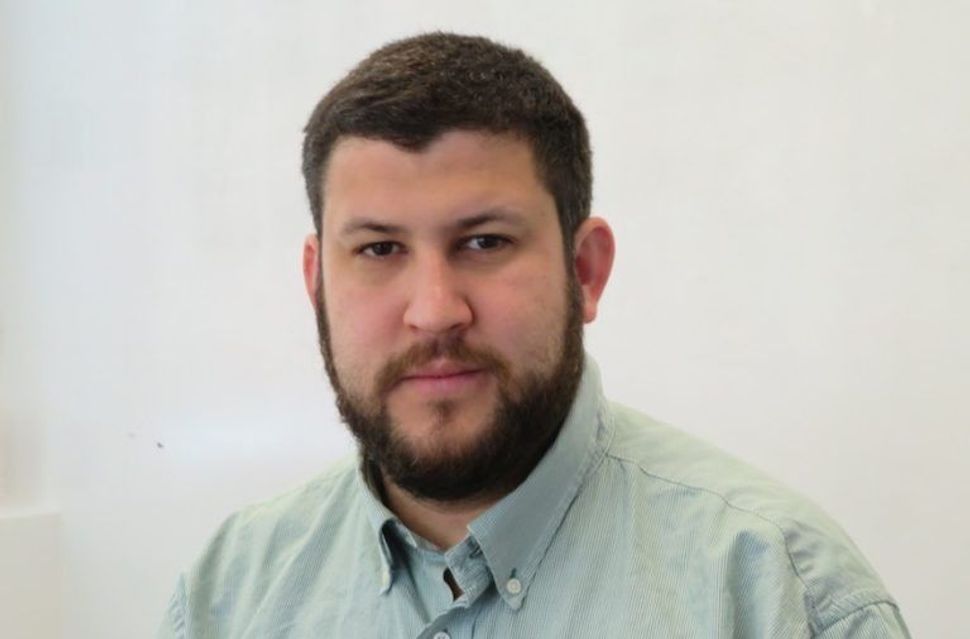 WASHINGTON (JTA) — David Smolansky has become the exiled face of the resistance to the regime of Venezuelan President Nicolas Maduro.

It doesn’t take long to realize why the major media constantly seek him out for commentary on the repressive socialist regime and its collapsing economy: Smolansky, 32, has packed a lot into his young life.

A journalist and former student activist, he is the youngest mayor in his country’s history. When he realized last year that he was targeted for arrest for his politics, he adopted a false identity, shaved his beard, wore a flat hat and cleared 35 checkpoints before making it into the jungles of Brazil.

And this keeps cropping up in his interviews: Political exile runs in his family.

“My grandparents left the Soviet Union in 1927, my father left Cuba in 1970, so I am the third generation of Smolanskys who’ve had to leave a country because of a totalitarian regime,” he told the BBC in December.

“I’m the third generation that has had to emigrate,” he told Reuters last month.

JTA met with Smolansky this week at a think tank off of K Street, the corridor for think tanks and lobbyists in the nation’s capital.

“They have been my inspiration,” he said of his father and grandfather. “They had to flee a country twice and bounce back.”

Both of Smolansky’s grandparents left what is now Ukraine because of anti-Semitism and the privations of living in the Soviet Union. They met in Cuba and married, starting a clothing business. They could not withstand the pressures on business brought by the Castro regime, and in 1970 left for a brief stay in Mexico before moving on to Venezuela.

“They didn’t have any freedom,” he said. “My family’s house [in Cuba] is now a ‘Center for Socialist Policy.’”

His grandparents died in 1989, when he was 3. His memory of his grandfather, Naum, is the pleasure he took in taking his grandson to a nearby bakery; breadlines in the Soviet Union led him to cherish the freedom to get bread whenever he liked.

Now his father lives in Venezuela under the watchful eye of the regime.

“He is a victim of his son being forced to leave,” Smolansky said.

Smolansky’s party, Popular Will, grew out of grassroots efforts in the mid-2000s to resist sweeping changes to constitutional law proposed by Maduro’s late mentor, the authoritarian leftist Hugo Chavez, that seemed to be aimed at stifling opposition. Many of Popular Will’s leaders were mayors. Its leader, Leopoldo López, is currently in prison.

Smolansky was a founding member of the party in 2009, and four years later, at 28, easily won his bid to become mayor of El Hatillo, a municipality in the capital city of Caracas.

He said his Jewish roots have always been fodder for his attackers.

“I have been accused of being the boss of Zionism in Venezuela, I was accused of being trained by the Mossad,” he said of the Israeli intelligence agency. “The walls of my house were covered in graffiti, ‘Zionist shit.’ It’s awful to see people on social media refer to me as a ‘shitty Jew.’”

Smolansky does not identify as fully Jewish — he says he had a Jewish and Catholic upbringing (his mother is a Roman Catholic). But he said it played a role in shaping him; he misses being with his father on Yom Kippur.

“I go with my father to synagogue” on the Jewish Day of Atonement and twice, Smolansky said, he fasted with his father.

“It’s a very special day, you separate from almost everybody, you are with yourself and you think on the last year,” he said.

He frets at the diminishing numbers of the Jewish community in his country, saying it now numbers no more than 10,000, down from what Smolansky and some other observers say was 30,000 before Chavez came to power in 1998.

Smolansky, who is not married, is a visiting scholar at Georgetown University here. He is researching security for citizens, with an emphasis on the status of Caracas as one of the most violent cities in the world and the dangers that Venezuela’s government poses to the region, in part because of its ties to Hezbollah, the Lebanese terrorist militia allied with Iran. Venezuela’s proximity, Smolansky warns, places Hezbollah “three hours by plane from the United States.”

His mission is to advocate for his party, which takes a harder line than others in the coalition of groups confronting Maduro. Smolansky said he buried five residents of El Hatillo — they were among the 130 protesters killed last year during protests against the government. He wants to expand the Lima group, the grouping of 17 countries in the Americas seeking a peaceful resolution to Venezuela’s crisis.

His outspokenness edges him close to some controversial postures: He will not rule out advocacy for a military coup to remove Maduro from power, instead saying the army should fulfill its constitutional role — a loophole wide enough to drive a tank through on its way to the presidential palace. (The opposition is boycotting presidential elections set for April 22, saying the system is rigged.)

Smolansky, meantime, is seeking allies. Jewish Floridians he knows invited him to attend this month’s conference of the American Israel Public Affairs Committee, which he found “interesting.” He wants Israel to speak out: Since its relations with Venezuela are precarious and Israel has vacated its embassy in the Latin American country, Smolansky asks: What has it got to lose?

“It will be important to have a statement,” he said.

Above all, unlike his parents and grandparents, Smolansky insists his exile is not permanent.

“I don’t want to be disconnected from Venezuelans,” he said.