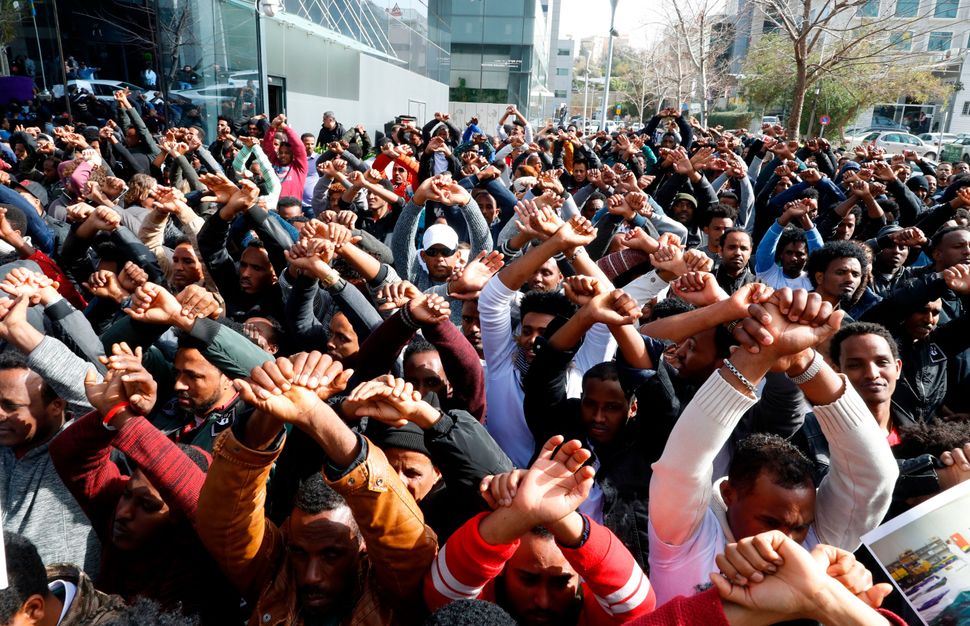 WASHINGTON (JTA) — It’s been a busy, confounding week for Prime Minister Benjamin Netanyahu of Israel and the question of the African migrants.

On Monday afternoon, after months of threats to deport the lot of them, Netanyahu said he reached an agreement with the United Nations that would have resettled half of the 38,000 African asylum seekers in Israel in Western countries. Notably, the refugees were described in the triumphant release from the prime minister’s office as “migrants” — an elevation from the term “infiltrators” that Netanyahu and others in his right-wing government had used for years.

That very evening, however, Netanyahu was on Facebook and back to using ”infiltrators.” Also, following a barrage of social media criticism from right-wingers, he was reconsidering the U.N. deal.

On Tuesday, the prime minister formally broke the deal and, in a second Facebook post, he named the culprit for the mess: the New Israel Fund, a group that bills itself as “committed to advancing the values of human dignity” in Israel.

How did a humanitarian and political crisis about Eritreans and Sudanese migrants in Israel morph into a controversy over a left-leaning funder of Israel’s nonprofit sector?

“The principal actor that led to Europe pressuring Rwanda to back out of the deal was the New Israel Fund,” he wrote. “The New Israel Fund is an organization that receives money from foreign governments and from forces hostile to Israel, like George Soros’ foundations. The overarching goal of the [New Israel] Fund is the erasure of the Jewish character of Israel and turning into it into a state of all its citizens, alongside a country of the Palestinian people cleansed of Jews, along the 1967 lines, with its capital in Jerusalem.”

Netanyahu provided no evidence for his claim that NIF was behind the pressure on Rwanda to back out of an earlier deal that would have sent the African migrants to that East African country. Rwanda, for its part, has consistently denied any such deal was in the offing. The Israeli Embassy here did not reply to a request to provide the evidence, or say if the Rwanda deal was being considered while Israel simultaneously negotiated the deal with the United Nations.

The New Israel Fund adamantly denies that it played any role in pressuring Rwanda or any country into not accepting the migrants.

“We had nothing to do with pressuring the Rwandan government, it’s an absurd claim,” said Daniel Sokatch, the fund’s CEO, told JTA.

“I am extremely surprised by this statement,” Olivier Nduhungirehe, a minister of state in its Foreign Ministry, said Wednesday on Twitter. “My surprise comes less from the fact that #Rwanda doesn’t even know what this @NewIsraelFund is all about, but more from the assumption that a foreign NGO can successfully impose any pressure on a sovereign government named @RwandaGov.”

As far as actual pressure on Rwanda, there was a protest outside its embassy in Tel Aviv organized by the African migrants, and a number of individuals delivered a letter to the Rwandan Embassy in Washington. The NIF opposes the mass deportation of the Africans, but it did not organize either of these initiatives, Sokatch said, although he would not be surprised if individual staffers had attended the demonstration. NIF, he noted, does fund groups like the Association for Civil Rights in Israel and Zazim, which have advocated on behalf of the migrants — but to Israelis and within the Israeli system, not to foreign governments.

So why is Netanyahu blaming the NIF? Absent replies from the embassy or elaborations from Netanyahu, it’s hard to say. But here’s what we do know:

The NIF spoke out against a plan, announced by Netanyahu in the fall, to summarily deport or jail all the migrants, but so did a range of organizations firmly in the U.S. Jewish mainstream.

Among the groups that denounced his plan as inhumane and potentially catastrophic to Israel’s image were the Anti-Defamation League, HIAS (the lead U.S. Jewish immigration advocacy group) and the Jewish Council for Public Affairs, the Jewish public policy umbrella. Additionally, five leading pro-Israel activists who rarely criticize the country sent Netanyahu a letter warning him that the deportations “could cause incalculable damage to the moral standing of Israel and of Jews around the world.” They were Alan Dershowitz, a constitutional lawyer and prominent Israel defender; Abraham Foxman, the former national director of the Anti-Defamation League; Rabbi Marvin Hier, the founder of the Simon Wiesenthal Center; Rabbi Irving “Yitz” Greenberg, a former chair of the U.S. Holocaust Memorial Council; and Rabbi Avi Weiss, a longtime activist who founded the Open Orthodox Chovevei Torah rabbinical school.

The NIF has a history with the right wing in Israel. The fund subsidizes groups that cast a critical eye on Israel’s occupation of the West Bank, its behavior in wartime and its treatment of Israeli Arabs. Even supporters of the group acknowledge that in addition to its support for hundreds of civil society and social welfare groups, NIF funds a few whose politics cross the line for many Israelis. Right-wing lawmakers have repeatedly sought to place restrictions on how some of NIF’s donor groups lobby and raise funds, especially in Europe.

“For decades, the Fund has subsidized anti-Zionist and pro-Palestinian organizations, among them those that slander Israeli Defense Forces soldiers, like Breaking the Silence and B’Tselem, and others that fight for Palestinian terrorists, like Adalah,” he wrote. “I don’t know of any western democracy, especially the United States, that would be prepared to suffer hostile activity funded by foreign governments, as has been happening here with the Fund for decades.”

Therefore, Netanyahu wrote, he had instructed his coalition chairman, Dudi Amselem, to “lead the process toward establishing a parliamentary investigative commission into the activities of the New Israel Fund, that threatens the future and the security of the state of Israel as the nation-state of the Jewish people.”

The NIF counters that its ambit is much broader, noting that the vast majority of the 300 groups it funds have to do with domestic issues like the rights of women and LGBTQ people, the rights of non-Orthodox Jews, and alleviating poverty and preserving the environment. In its funding principles, NIF also hews to a Zionist credo: “The New Israel Fund is dedicated to the vision of the State of Israel as the sovereign expression of the right of self-determination of the Jewish people and as a democracy dedicated to the full equality of all its citizens and communities.”

The NIF conducted a review of some of the groups receiving its donations about a decade ago, Sokatch said, and cut off those that at times had rejected the principle of a Jewish state and that backed a boycott of Israel.

As for Netanyahu’s specific allegations, a review of NIF donors in its 2016 yearbook reveals no foreign governments, and a donation of at least $100,000 from the Open Society Foundation led by George Soros, a Jewish liberal philanthropist that Netanyahu reviles. Sokatch said Open Society no longer funds NIF, although “I wish it did.”

As for foreign funding, an NIF spokeswoman told JTA that project-specific funds have in the past come “from, among others, the U.S. government [for work in the Bedouin sector], the European Union and others. This makes up a very, very small part of our total funding, never more than 1 or 2 percent, and sometimes not even that. The vast majority of our funds come from individual donors and private foundations.”

Groups that NIF funds — and that draw right-wing criticism — do accept funding, separate from their NIF funding, from foreign governments. These groups, including B’tselem, which tracks Israel’s actions in the West Bank and during wartime, and Breaking the Silence, made up of veterans who report what they say are violations of the Israeli army’s own policies, say they would not be able to exist without the assistance provided by foreign governments.

Critics of NIF say the willingness of these groups to accept funds from European governments that at times harshly criticize Israel fuels suspicion of them among Israelis, and of the NIF for associating with them.

“Israelis, and not only those who vote for the right, see the NIF as a powerful, secretive and illegitimate extra-parliamentary alternative government,” said Gerald Steinberg, who directs NGO Monitor, which tracks groups critical of Israel’s government. “There are no checks and balances, and they slam and denounce even the most responsible Israeli critics and analysts instead of conducting constructive dialogues. For all of these reasons, the NIF has created a great deal of suspicion and anger.” (NIF counters that its funding is transparent and available online.)

The tit for tat aside, some observers were suspicious themselves of Netanyahu’s targeting of NIF as an explanation for his about-face on the African migrants deal — a turnaround that came after intense pressure from his right flank. Martin Indyk, the former U.S. special envoy for Israeli-Palestinian negotiations, used the prime minister’s nickname in labeling his attack on NIF a “Bibiesque/Trump-style deflection.

“He was the one to negotiate, sign, announce and then renege on the agreement on asylum-seekers. But it’s not his fault. So it must be NIF’s fault,” Indyk tweeted. “Surely Israelis are smarter than to believe such hogwash.”

A number of U.S. Jewish groups have spoken out against Netanyahu’s broadside. One was the Union for Reform Judaism.

“Shocked & angered by PM @Netanyahu’s attacks on @NewIsraelFund, which for decades has been a trusted champion of an Israel embodying the prophetic ideals of our Jewish tradition, including economic justice, religious freedom, human rights & more,” its president, Rabbi Rick Jacobs, said on Twitter. “If the PM is looking to assign blame for the tragic plight of asylum seekers, he can look no further than the mirror.”