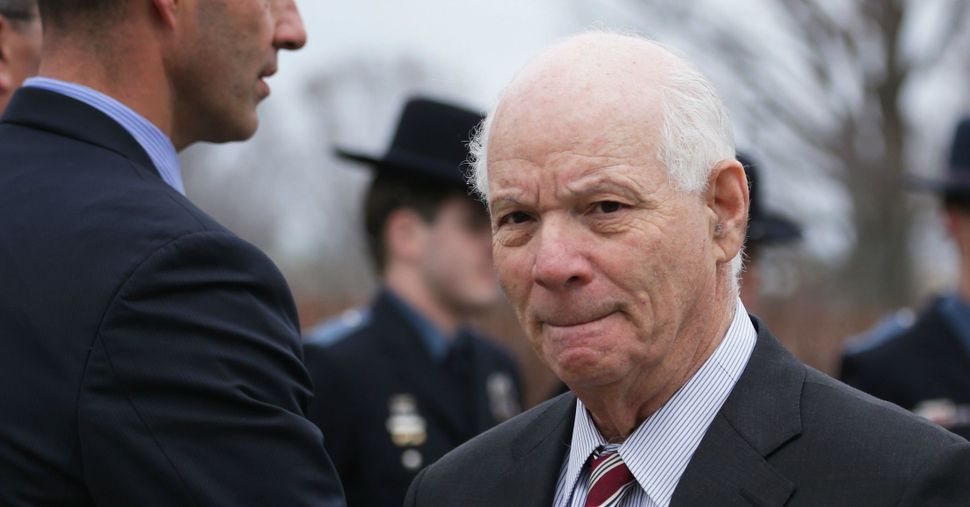 Cardin in his speech Monday stood by his bill that would criminalize some forms of boycotting Israel, which the liberal Jewish Middle East policy group opposes on free speech grounds. He also extolled the closeness of the U.S.-Israel relationship.

The most rapturous cheers on Monday were reserved for Sen. Bernie Sanders, I-Vt., who was — as has been his custom — sharply critical of Netanyahu.

But Cardin’s remarks about the Israeli premier were more unexpected. Cardin noted that he had opposed the 2015 Iran nuclear deal — a key policy win for J Street and its allies — but nonetheless decried Netanyahu for using Congress as a platform to speak out against it.

“When the prime minister accepted an invitation to address the joint session of Congress creating a partisan division in our own country, we speak out against that decision,” said Cardin. Democrats saw Netanyahu’s March 3, 2015 speech, coordinated solely with Republicans, as an unseemly attack on then-President Barack Obama and Democrats.

Cardin also likened Netanyahu’s plan to deport African asylum seekers to President Donald Trump’s policies severely restricting refugees arriving from some Muslim majority countries. He also noted Trump’s failure to unequivocally condemn white supremacists during the demonstrations in Charlottesville, Virginia. In each case, he said his objections arose from “a responsibility to speak out against the policies of Israel or the United States that are not consistent with our Jewish and Democratic values.”

“We speak out!” he said in a call and response that earned applause.

Cardin said he was still open to modifying his bill targeting the movement to boycott, divest from and sanction Israel, but defended it as a necessary means of countering pressure on companies to boycott Israel. He also defended the bill’s inclusion of boycotts targeting Israeli settlements. That policy is very unpopular at J Street, which opposes BDS overall, but does not oppose settlement boycotts.

Sanders in his speech especially decried Israel’s actions recently on the Gaza Strip border, where  30 people Palestinian protesters were killed and hundreds were wounded in clashes with Israeli soldiers.

“Though the overwhelming majority of these protesters were nonviolent, we know that some of them were not, and when Israeli soldiers are in danger we can all agree that they have a right to defend themselves,” Sanders said. “I don’t think that any objective person can disagree that Israel has massively overreacted to these demonstrations.”

Sanders and Cardin are both Jewish, and so is Sen. Brian Schatz, D-Hawaii, who called for more openness among Democrats to different expressions of being pro-Israel. He said his views on Israel, emphasizing a two-state outcome, should be considered, but, “In Congress I am at the left edge and that cannot hold.”

Husam Zomlot, the Palestine Liberation Organization envoy to Washington, received a warm welcome. He noted that of the three parties to efforts to renew Israeli-Palestinian talks, only the Palestinian negotiators still were committed to two states, while the Trump and Netanyahu governments had retreated from endorsing that outcome. He especially decried Trump for his recognition of Jerusalem as Israel’s capital.

“Jerusalem is the key to peace,” Zomlot said. The recognition “did not do justice to the history of Jerusalem.”

Zomlot earned loud applause, which was noticed by Merav Michaeli, the Zionist Union Knesset member who spoke after him and Schatz. She chided the audience for being more enthusiastic in cheering Palestinians than Israelis.

“Frankly it hurt me when I did not hear you applauding the last speaker,” she said, referring to Schatz “when he said he believes in the state of Israel and its right to exist.”

That earned her a round of applause.

Later she tweeted, “@streetdotorg is SO pro Israel that sometimes people take it for granted, it was a pleasure hearing the wonderful audience in #JStreet10 applauding Israel and peace for two states.”