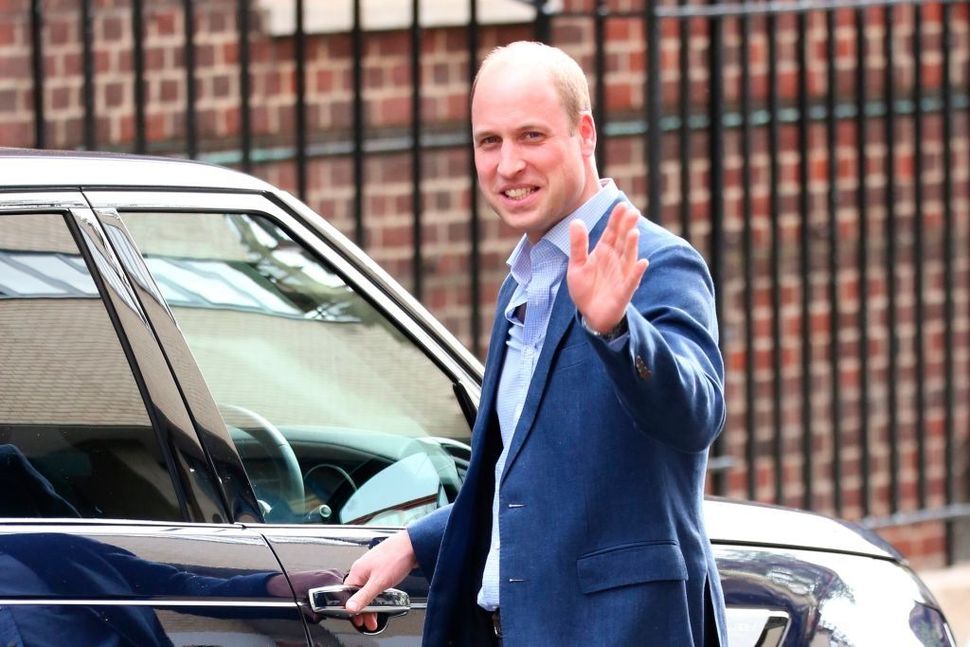 Britain’s Prince William, Duke of Cambridge, gives a wave as he leaves the Lindo Wing at St Mary’s Hospital in central London, on April 23, 2018, after his wife Britain’s Catherine, Duchess of Cambridge, gave birth to a son, their third child. Image by ISABEL INFANTES/AFP/Getty Images

(JTA) — Prince William will soon embark on a historic visit to Israel. During the trip, which also includes stops in Jordan and the West Bank, Britain’s Duke of Cambridge will visit important sites in Jerusalem and Tel Aviv and meet with Israeli Prime Minister Benjamin Netanyahu and President Reuven Rivlin.

William is set to arrive Monday in Israel on a trip that is sure to be closely watched by the British and Israeli media, as well as fans of the royal family around the world, even though he will not be accompanied by his wife, Duchess Catherine of Cambridge.

Ahead of the trip, JTA compiled some interesting facts relevant to the royal visit.

William’s visit to Israel is not the first by the royal family.

In March, some media outlets reported that the visit would be the first by a member of the royal family. That is not the case, though William’s visit is being billed as the first official one. Prince Phillip, William’s grandfather, visited the country in 1994 for a ceremony honoring his mother, Princess Alice, for her sheltering of a Jewish family during World War II (more on that later). Phillip accepted the Righteous Among the Nations award on behalf of his late mother and planted a maple tree in her memory at Yad Vashem. Prince Charles, William’s father, visited Israel to attend the funerals of Prime Minister Yitzhak Rabin in 1995 and President Shimon Peres in 2016.

His schedule is already stirring up conflict.

Though Israeli leaders were quick to praise Prince William after the trip announcement in March, everyone wasn’t as happy upon the release of the official schedule, which listed Jerusalem as being in the “Occupied Palestinian Territories.” Zeev Elkin, the Israeli Cabinet member in charge of Jerusalem and a mayoral hopeful for the city, called on William’s staff to correct the itinerary.

“United Jerusalem has been the capital of Israel for 3,000 years and no distortion in the tour itinerary can change that reality,” Elkin said in a statement that also was posted Monday on Facebook. “I expect the prince’s people to correct the distortion.”

William will visit his great-grandmother’s grave on the Mount of Olives.

Princess Alice of Battenberg has a special connection to the Jewish people. Alice, who was married to Prince Andrew of Greece, helped shelter three members of the family of a late Greek-Jewish politician in her palace in Athens during World War II. The Gestapo was suspicious of Alice, even questioning her, but the princess, who was deaf, pretended not to understand their questions. Alice later became a nun.

Before her death in 1969, she said she wanted to be buried at the Convent of Saint Mary Magdalene on the Mount of Olives in Jerusalem, near where one of her aunts, Grand Duchess Elizabeth Fyodorovna, was laid to rest. Her wish wasn’t immediately realized; Alice was buried initially at Windsor Castle. However, in 1988, her remains were transferred to Jerusalem. In 1993, the Yad Vashem Holocaust museum in Israel named her a Righteous Among the Nations for her war-era bravery.

Prince William will stay at the historic King David Hotel.

Opened in 1931, the King David has played a pivotal role in Israel’s history. The hotel has hosted royalty and heads of state, including King George II of Greece, who set up his government there in 1942 when the Nazis occupied his country. During the British Mandate, the hotel’s southern wing was turned into British administrative and military headquarters. In 1946, the hotel was the target of a bombing by the Irgun Zionist paramilitary group that killed 91, including 15 Jews. Two years later the hotel became a Jewish stronghold, as Israel declared its independence.

There’s a tattoo parlor in Jerusalem’s Old City where several royals are said to have been inked.

If William has any desire to get a tattoo, Razzouk seems like the obvious choice. King Edward VII, King George V and Prince Albert are all said to have been inked there with Jerusalem crosses. The shop, run by the Razzouk family for some 500 years in the Christian Quarter, is popular among visitors to the city. The family uses wooden block stamps, some of them hundreds of years old, to stamp religious symbols onto the skin before the tattooing process begins. Tattoo artist Wassim Razzouk offered to do the tattoo should William be interested, telling Haaretz “it would be a great honor.”