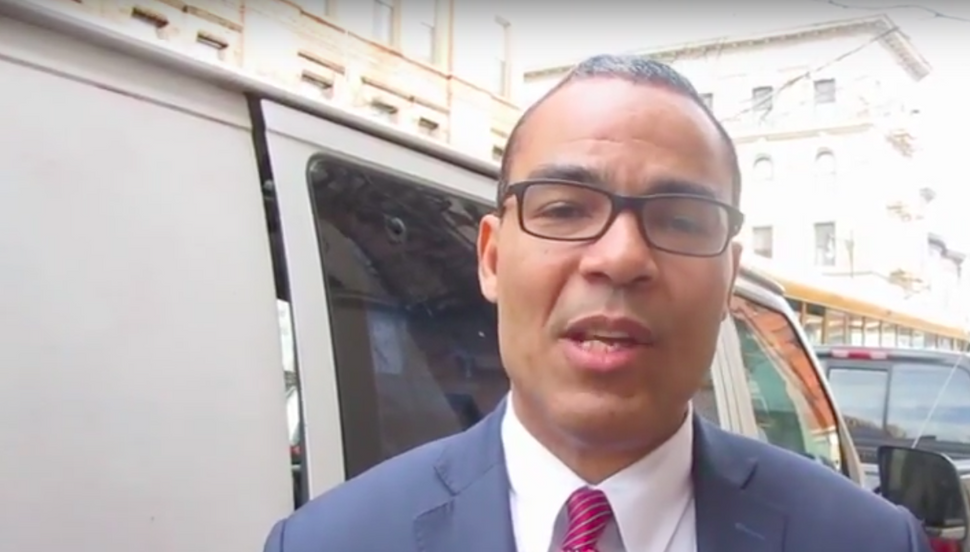 It also included a man who has run for office on the platform of fighting “greedy Jewish landlords.”

Notice the guy behind her, in the purple shirt? It’s Thomas Lopez-Pierre, Mark Levine’s primary challenger from last year who called for the defeat of the “greedy Jewish landlords” as his primary issue. Disgusting. @MarkLevineNYC @Ocasio2018 pic.twitter.com/9lDpyPDKKf

TV cameras picked out Thomas Lopez-Pierre, who ran unsuccessfully for New York City Council last year and is running again in 2021, standing just behind Ocasio-Cortez when she learned she had toppled 10-term incumbent Rep. Joe Crowley.

Ocasio-Cortez quickly took to Twitter to say she has “no idea” who Lopez-Pierre is — and denounce his bigotry.

Thank you for this opportunity and your graciousness here. No idea who this guy is, hundreds of folks walked into the hall open to the public last night. I absolutely denounce any such bigoted and reprehensible statements.

On his Twitter page, Lopez-Pierre shared footage of him wearing a campaign t-shirt and handing out flyers outside a subway station. He later grabbed a prime spot near Ocasio-Cortez during her victory speech.

While Lopez-Pierre’s recent tweets only mention “Greedy landlords” without reference to religion, he explicitly pointed out in an interview with the Forward on Wednesday that it was Jewish landlords he was fighting against.

“It is their business model to push out black and Hispanic tenants,” he said. He argued that he is not anti-Semitic, claiming that he would be fighting “greedy Martian landlords” if that’s who owned the property in gentrifying neighborhoods like Harlem and Washington Heights.

Lopez-Pierre, who doesn’t live in the district where Ocasio-Cortez won, said that he had been a supporter of her campaign for “over a year,” but did not give donations to her or other local candidates he backs.

“I have to do it quietly because of who I am and because the press will go wild,” he said, possibly overstating his influence on the media. “It would hurt the political campaigns I love and support.”

He said that he did direct friends to donate to her campaign, and volunteered for her for eight hours but “purposefully did not tweet until the media couldn’t do anything about it.”

Lopez-Pierre admits he has never spoken to Ocasio-Cortez. But he pointed out that she did make affordable housing and gentrification a key campaign issue.

“She understands the macroeconomic pain and suffering, [and] that real estate developers have corrupted our elected officials,” he said.