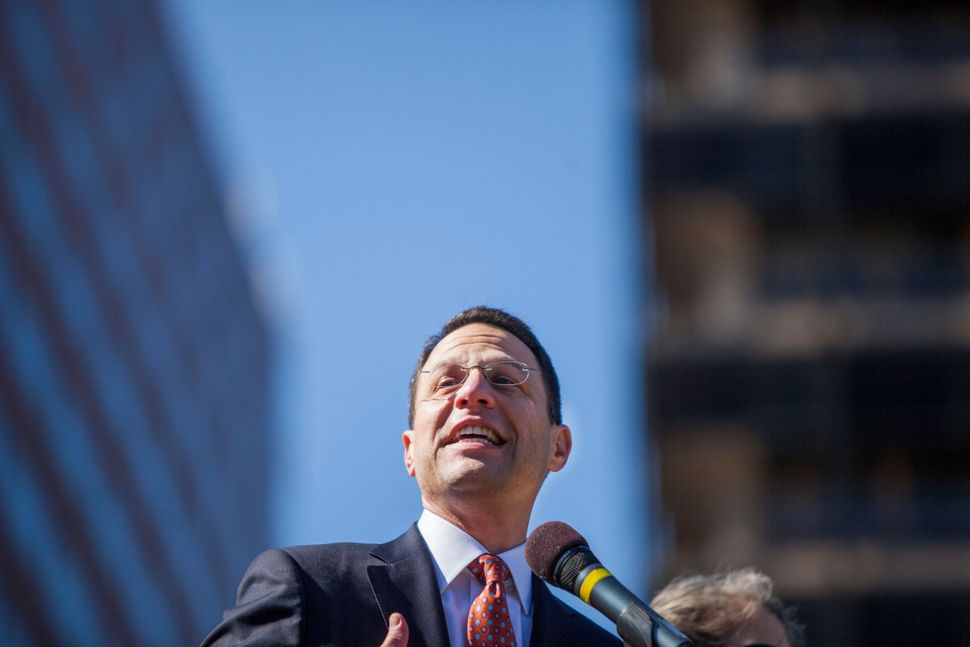 (JTA) — The first days of November 2016 were a tense time for America, for Pennsylvania, and for Josh Shapiro, a Democrat running for attorney general in state that looked like it might go red. Looking to succeed a corrupt member of his own party who had resigned in disgrace, Shapiro might have been expected to spend every second of the campaign’s final days trying to get out the vote.

But no. The Friday before Election Day, he was in a second-grade classroom at the Perelman Jewish Day School in Wynnewood, talking to the students about civics and supervising a mock election that pitted kazoos vs. rockets.

Five days later, he narrowly won the attorney general race, even as the state went for Donald Trump. This month, he made a name for himself nationally, compiling the extensive report on sex abuse in Pennsylvania’s Catholic churches. The 18-month probe names at least 300 priests accused of child sex abuse, includes testimony by more than 1,000 victims, and accuses senior church officials in Pennsylvania and at the Vatican of a “systematic coverup.”

But even as the national and even global spotlight has swung his way, he’s at Jewish day school all the time — giving lectures or coaching his kids’ basketball teams. Friends and acquaintances of Shapiro say his success isn’t surprising, that he’s a straight shooter who has kept his feet on the ground even as his star has risen. And that he remains rooted in a Jewish community that helped shape his values and sense of service.

“For me, when you boil down all the teachings and all the rituals, fundamentally, Judaism is teaching that none of us is required to complete the task, but neither is any of us free to refrain from it,” he told Philadelphia magazine in 2007. “It is really what guides me in my public service, and what that means, then, is that we don’t have a requirement on us to solve every problem, but we are also not permitted to sit on the sidelines and leave someone else do it for us.”

He has also stayed in touch with classmates from his own days at Jewish day school — some of whom have gone on to work under him or remain connected to his political career. He married his high school sweetheart, and two of his four children attend his alma mater in suburban Philadelphia, now named the Jack M. Barrack Hebrew Academy.

“He has a fond sense of his past and his relationships,” said Jennifer Groen, a friend from childhood who is now an administrator at Barrack, and who saw him there this week.

“He cares very much about the people he grew up with,” she said. “Everything he’s doing now is a continuation of what he’s been.”

Shapiro, 45, has caused reverberations globally with the 900-page report on the Church. It has sparked calls for reform in the Pennsylvania church and beyond, and related fallout has even led to demands for Pope Francis’ resignation.

“I put the full force of our office into this investigation,” Shapiro told the New York Times Monday. “The notion this is just something that happened a long time ago, and that we need to move on, is exactly the wrong response. Child rape is child rape, whether it happened in 1970 or it happens in 2018. There is no excuse for allowing it. And there is no excuse for covering it up.”

(Shapiro’s office said he was unable to speak with a JTA reporter before this week’s deadline.)

Shapiro had an early start in politics and activism. His mother was active in the movement to free Soviet Jewry, and he followed her lead, setting up a pen-pal program with Soviet Jewish teens when he was in seventh grade and getting flown out to Cleveland to speak to the Jewish community about the cause.

In high school at what was then Akiba Hebrew Academy, Shapiro also took a leading role in the mock 1988 Democratic Convention, and was active in Students Against Drunk Driving. His one political setback as a teen — the only election he ever lost — was as Akiba’s student president. (The winner, who campaigned on bringing an ice cream machine to school, was Ami Eden, the CEO of 70 Faces Media, JTA’s parent company.)

“He’s honest, he’s genuine, he’s smart, he’s competent, he’s all the things you wanted to see in a student leader — which he was — and even more in this day and age we want to see in the leadership of government.” said Sharon Levin, now Barrack’s head of school, who had Shapiro as a student in three of her history classes.

She added that “Josh was an excellent basketball player — by Akiba standards.”

Shapiro may have understood how low those standards were when he joined the Division III basketball team at the University of Rochester, only to be cut. He ran for student government instead, serving as school president during his sophomore year. From there, he went to various jobs on Capitol Hill, earning his law degree at Georgetown at night.

After moving back to the Philadelphia area, he won a 2004 election to the Pennsylvania House of Representatives, flipping the seat from red to blue. Against the backdrop of Pennsylvania’s reputation for corrupt state government, he campaigned on transparency, a moderate image and promises to pass legislation.

All of those have remained dominant themes throughout his career, down to the clean-cut image he presents. Shapiro’s parted hair, smooth face and rimless glasses looked so formal that Neil Oxman, Shapiro’s former political consultant, would call him a “bar mitzvah photo.”

“His inclination to always be around others and help others is a natural draw to see him move into the world of politics, from his first election for the statehouse back in 2004, when he wore through a number of pairs of shoes” knocking on constituents’ doors,” said Shapiro’s younger brother, Adam.

Two years after his election, he engineered a coup, recruiting a moderate Republican to be the speaker of a statehouse with a slim but fractious Democratic majority. Shapiro took the newly created position of deputy speaker. From there, he was elected Commissioner of Montgomery County, and went from there to the attorney general’s office.

“He was running on a platform of ‘I’m going to put the attorney general’s office back together again,’” said Dan Segal, chair of  Philadelphia’s Jewish Community Relations Council. “What was important to the Democrats is that they won with the cleanest person. He’s just totally clean.”

Shapiro’s focus on fighting corruption may be why criticism of him appears relatively muted. Opponents in the primary and general elections for attorney general pointed to instances of him granting county contracts to companies shortly before or after receiving campaign donations from their executives. “Josh Shapiro does not practice what he preaches. His rhetoric does not match his conduct,” said John Morganelli, a primary opponent in 2016, according to the Morning Call. “He runs around with ethics and integrity on his sleeve, but where is that same standard when it comes to his own conduct?”

Such allegations haven’t dogged him. And a lawyer for the Catholic officials named in the recent report told JTA that he had no comment on Shapiro’s personal conduct in the case, and was focused instead on its content.

Shapiro’s positions have consistently been liberal. In 2005, he publicly supported same-sex marriage. In the 2008 Democratic primary, he was an outspoken supporter of Barack Obama, defending the candidate from criticism over his relationship with the controversial Rev. Jeremiah Wright. He recently successfully obtained an injunction in federal court to stop the 3-D printing of guns.

And as attorney general, he has gone up against the president multiple times. He got an injunction against Trump’s order that birth control not be covered under Obamacare. During the waves of bomb threats against Jewish centers last year, he attended a meeting with Trump and other attorney generals; it was Shapiro who told the media that Trump suggested the bomb threats were a false flag effort to “make others look bad.” “I really don’t know what he means, and I don’t know why he said that,” Shapiro told a reporter at the time.

(Trump may have been right; a Jewish Israeli man was arrested for making the majority of threats.)

“There’s a lot the president does that I disagree with, but I’m not some congressman that just opines all day about stuff,” he told The Times. “My job is to adhere to the rule of law and make sure the law is being followed.”

And in a climate where Democrats are becoming more critical of Israel, Shapiro is vocally supportive. Last year, he spoke at a gala dinner for StandWithUs, a pro-Israel group that regularly defends Israel from criticism from the left. He spent part of his senior year of high school in the country with his class, and his daughter is doing the same thing now.

That history may be one reason why his friends in the Jewish community want to see his career keep advancing. Like nearly any politician, Shapiro has been coy about his ambitions. But if he does run for office — say, governor of Pennsylvania — there’s at least one constitutency he can count on.