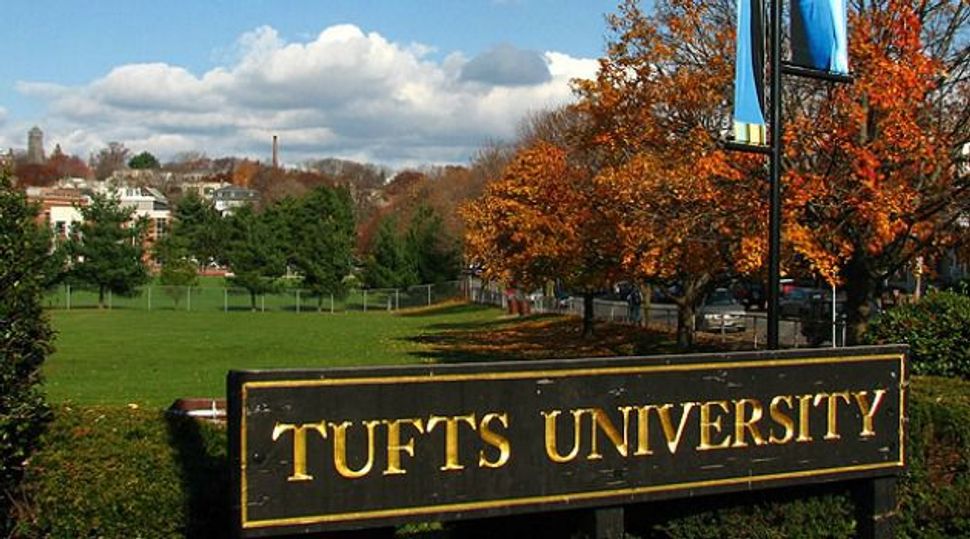 MEDFORD, Mass. (JTA) — Pro-Israel students at Tufts University say a new course on Palestine is one-sided and demonizes Israel, and violates the university’s own policies on taking political stances.

The course, taught by Thomas Abowd, a faculty member in the American Studies program, was first reported by Jewish News Syndicate. The JNS story sparked a flurry of criticism and concern from the Anti-Defamation League and pro-Israel campus organizations.

Titled “Colonizing Palestine,” the course is offered through the liberal arts school’s Colonialism Studies program and is cross listed with Women’s, Gender and Sexuality studies. A course description says it will “explore the history and culture of modern Palestine and the centrality of colonialism in the making of this contested and symbolically potent territory.”

The description also says that students “will address crucial questions relating to this embattled nation, the Israeli state which illegally occupies Palestine, and the broader global forces that impinge on Palestinians and Israelis.”

In a statement shared with JTA, the Hillel chapter at Tufts said that while it supports academic freedom, it characterized the course description as “prejudicial and unnecessarily provocative.”

Tufts Friends of Israel, a student group, wrote in a statement to the university’s president, Anthony Monaco, that the course as described prejudges the Israeli-Palestinian debate.

“A course must aid a student’s pursuit of knowledge and provide … the information and tools to arrive at their own conclusions,” the group wrote.

Ben Shapiro, a junior from Los Angeles and co-president of Tufts Friends of Israel, says the group is still waiting for a response.

“Our main issue [is that the course] denies Jewish indigeneity to Israel and presents a one-sided narrative as truth,” Shapiro said.

Tufts Friends of Israel also said that the course breaches a 2017 statement by the Office of the President that reads: “While members of our community vigorously debate international politics, Tufts University does not adopt institutional positions with respect to specific geo-political issues.”

The statement, however, came in a letter by the president rejecting  a resolution by the university’s undergraduate student government calling on Tufts to divest from entities doing business with the Israeli government.

It is not clear whether offering a course, however one-sided, suggests that a university has adopted an “institutional position” on the subject being taught.

The university sees the course as one among many options that offer students an opportunity to “become familiar with a variety of perspectives on important and complex issues facing our global society,” according to a statement provided to JTA from Patrick Collins, the school’s executive director of public relations.

“University-facilitated discussion of these issues does not imply endorsement of a particular view, and we anticipate and welcome the Tufts’ community’s vigorous discussion of varying viewpoints and beliefs,” the statement says.

By midweek, fewer than five students had signed up for the course, Shapiro said, reviewing online course registrations.

Collins was unable to confirm how many students had enrolled or pin down whether there is a minimum number required for a class to be offered.

In an email, Collins provided descriptions of several university courses that address a range of perspectives on the Israeli-Palestinian conflict, including one at its prestigious graduate program at the Fletcher School that is open to undergraduates. He also cited an array of courses in Judaic studies and political science that address Israeli politics and culture.

Abowd is the author of the 2014 book “Colonial Jerusalem.” He supports the academic boycott against Israel and signed a boycott statement by Anthropologists for the Boycott of Israeli Academic Institutions.

In an email, Abowd declined a request from JTA to discuss his course and a response to the objections raised.

“I’m going to have to decline an interview with you due mostly to the sheer volume of requests I’ve been receiving of late,” Abowd wrote.

News about the course drew an immediate rebuke from Jonathan Greenblatt, CEO of the Anti Defamation League and a Tufts alum.

“We support academic freedom but @TuftsUniversity must ensure that classes examining the complex Israeli-Palestinian conflict are not one sided platform for propaganda that demonize Israel and empower anti-Israeli activists,” Greenblatt wrote in an Aug. 16 Twitter post.

We support academic freedom but @TuftsUniversity must ensure that classes examining the complex Israeli-Palestinian conflict are not one sided platforms for propaganda that demonize Israel & empower anti-Israel activists. Political bias is best left out of the classroom. https://t.co/ajZdCRDZaZ

Shapiro was not persuaded by the administration’s response that the school offers numerous options that examine the contemporary Middle East. Judaic Studies courses are often about religion, history or cultural topics.

They “do not have to do with modern Israel,” he said.

Tufts Friends of Israel is not trying to shut down Abowd’s course and will not mount a protest, Shapiro said, since classes won’t begin until after Labor Day and he has yet to see a syllabus. Instead, the group is turning its attention to the question of how new courses win approval.

The group is also gathering signatures online for a letter calling on the Tufts administration to reaffirm its opposition to academic boycotts against Israel.

The school has taken a stance against academic and economic boycotts against Israel dating back to 2013, when it issued a statement strongly opposing the American Studies Association’s resolution for an academic boycott, and most recently in 2017.

Robert Trestan, the executive director of the Anti-Defamation League’s Boston office, said the controversy raises an important question about the college’s process for course approval — especially the way the school promotes and advertises its classes.

“No one is saying that this is a forbidden topic or restricting a professor’s ability to teach about the subject matter,” Trestan told JTA in a phone conversation.

But, he said, the course description “states as fact that Israel is committing illegal acts,” and draws judgments and conclusions “before the first class is in session.”

“It’s important to insure that when [Tufts] does advertise a class, it’s inviting for all students and sends a message that all views and perspectives are welcome for discussion,” Trestan said. “This course seems to do the opposite.”