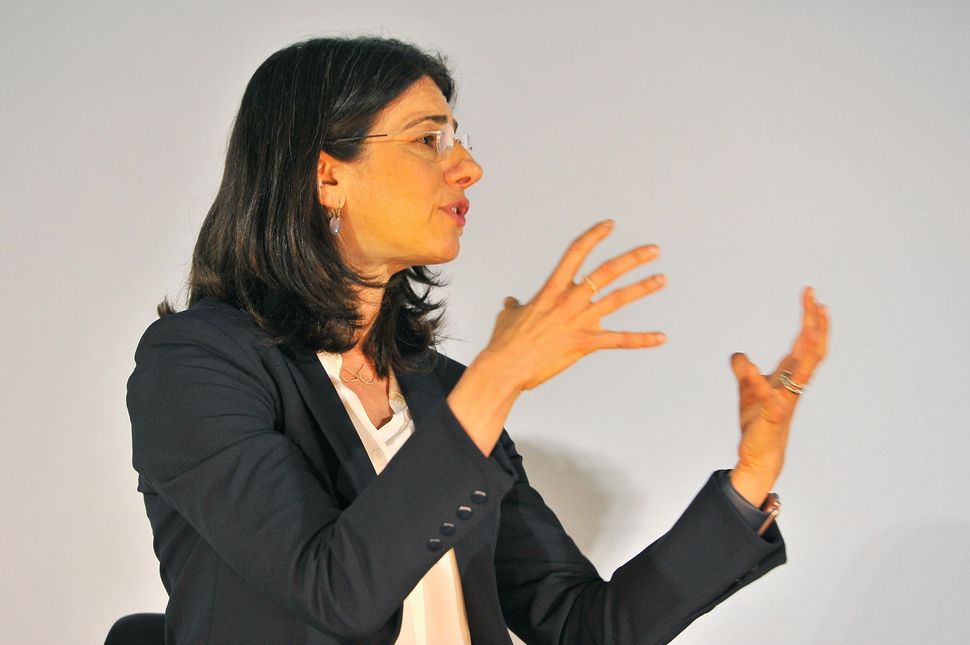 NEW YORK (JTA) — Amy Bach has won the 2018 Charles Bronfman Prize for her research in statistics about the criminal justice system.

The organization announced on Wednesday that it was giving the Jewish humanitarian award to Bach, a lawyer and award-winning author. She is the founder and executive director of Measures for Justice, an organization that provides data on the criminal justice system across the United States

Bach told JTA she was “thrilled” to receive the prize, which carries a $100,000 award. She said she will give her prize money to her organization.

“It means so much to the work that we’re doing and to all the people on our team who’ve worked so hard to create public data that people can use so they can see how their county’s justice system is working,” she said in a phone interview.

Measures for Justice currently provides data for free on its website about six states’ criminal justice systems, including statistics about case outcomes from arrest to post-trial. The data can be filtered by categories such as defendants’ race and ethnicity, sex, age and offense type. The organization plans to release information about 14 additional states by 2020, Bach said.

“It’s foundational that we need to see the problems in the criminal justice system before we can fix them,” Bach said. “Otherwise we’re flying blind.”

Founded in 2004, the Charles Bronfman Prize is presented annually to a Jewish humanitarian under the age of 50 whose work draws on Jewish values. (Bach, now 50, was 49  in time for the nomination deadline in January.) Previous recipients include Israeli writer Etgar Keret, KIPP charter schools network co-founders Mike Feinberg and Dave Levin, and Gift of Life founder Jay Feinberg.

The prize was created by Ellen Hauptman and Stephen Bronfman — together with their spouses Andrew Hauptman and Claudine Blondin Bronfman — in honor of their father Charles, a prominent Jewish philanthropist and co-founder of the Taglit Birthright program.

“Amy’s work revealed a critical gap in our criminal justice system, and she developed an ingenious method for filling it,” he said. “She epitomizes the concern for social justice and entrepreneurial spirit that the Prize recognizes.”

Rosalie Silberman Abella, a justice on Canada’s Supreme Court, said in a statement on behalf of the prize’s judges that Bach’s research helps improve the situation of marginalized people .

“Prison impacts some of the most disadvantaged,” Abella said in a statement. “Amy’s initiatives go toward taking care of people who can’t take care of themselves, addressing universal issues of poverty, race, indigenous populations, the undereducated.”

Bach, a graduate of Stanford Law School, first started investigating the criminal justice system as part of an article for The Nation about an overburdened public defender who had little time for his clients.

That story prompted her to look further at how people were being treated in the justice system and culminated in the publication of her book “Ordinary Injustice: How America Holds Court.” In the book, which won the 2010 Robert F. Kennedy Book Award, Bach looks at how the shortcomings of the criminal justice system affect ordinary people.

A year later Bach founded Measures for Justice. She says she draws inspiration from Judaism.

“In terms of my Jewish values it’s making the world a better place and trying to make visible the invisible harm that people have to suffer on a daily basis,” she said.

She added that her goal is both to help people in the criminal justice system who are suffering and people working in the system who “want to do the right thing but can’t see the problem yet.”

Bach lives in Rochester with her husband John Markman, a physician at the University of Rochester Medical Center, and their 10-year-old son Leo.