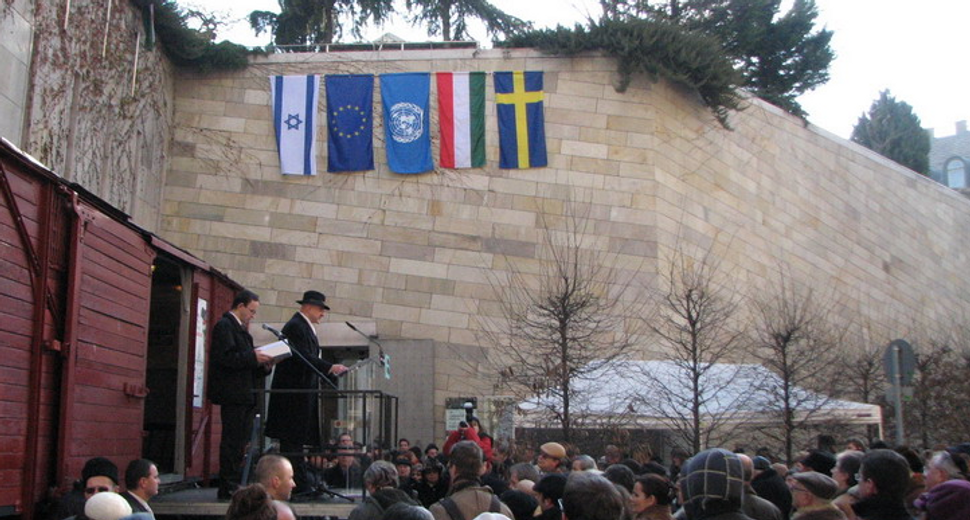 (JTA) – Hungary’s controversial Holocaust museum will open next year despite opposition by some in the Jewish community to its premise and staff, according to a government statement.

Gergely Gulyás, the head of the Prime Minister’s Office, said Friday at a news conference that the House of Fates will open in Budapest in 2019, four years after the building for the new institution was completed. The local Chabad community has replaced the country’s other Jewish federation of communities as a partner in the museum, according to the report.

“The horrors of the Nazi and communist dictatorships of the 20th century must never be forgotten,” Gulyás said, according to the MTI news agency. “The fact that Hungary’s Jews were shipped off to death camps after the German invasion of March 19, 1944 doesn’t absolve the state … of the crime of failing to protect its citizens. There’s no collective guilt, only state responsibility.”

The Simon Wiesenthal Center and other Jewish groups consider equating Nazism and communism a form of Holocaust distortion. Hungarian troops and officials under Nazi collaborators Miklos Horthy and later Ferenc Szálasi actively hunted hundreds of thousands of Jews during the Holocaust, at times killing them brutally without German involvement.

The museum cost the Hungarian government $22 million. It will add another $6.1 million for its opening, Gulyas said.

Part of the reason for the delay in opening is the refusal of the Mazsihisz federation of Jewish communities and the Yad Vashem Holocaust museum in Jerusalem to cooperate with the museum, according to an expose published last year by the news site 444.

The two organizations criticized the appointment of historian Maria Schmidt to head the House of Fates. Schmidt has said Nazism was no worse than Soviet communism — a narrative favored by nationalists across Eastern Europe.

But the state museum will works in cooperation with another Jewish Hungarian federation, Gulyas said, naming the Chabad-affiliated EMIH umbrella group, the MTI news agency reported.

Relations between Mazsihisz and EMIH have deteriorated in recent years amid tensions over relations with the right-wing government of Prime Minister Viktor Orban.

Mazsihisz broke its ties with the government over the unveiling in 2014 of a sculpture commemorating the victims of Nazi occupation that shows an eagle attacking an angel. Mazsihisz said this suggested, falsely, that Hungary was a victim of Nazi Germany rather than a collaborator. EMIH, however, maintained its relations with the government.

Mazsihisz has also accused the government of fomenting anti-Semitism with its billboard campaign against George Soros, a Hungary-born Jewish billionaire with whom the government clashed over his plan to increase immigration to Europe. EMIH said there was nothing anti-Semitic about the billboards, which featured a picture of Soros laughing and the slogan “don’t let him have the last laugh.”

“Some chose the easier path, to protest and to get offended,” whereas others chose to work together toward a common goal, he said.